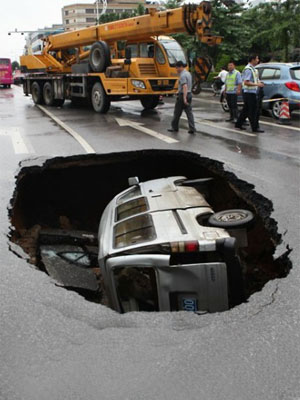 A pothole left unfilled in a well-trafficked road will cause a small amount of damage to the many cars that pass over it. Fixing the pothole might cost a few hundred dollars, but if not repaired, the distributed damage will quickly exceed the cost of patching the broken road.

In democracy, no one is responsible or accountable, yet government retains a monopoly on authority. This prevents the local people harmed by a problem from fixing it, even when the solution is simple, known, and locals are willing to fund it. Authorities can ignore essential questions with impunity and usually have no personal stake in any matter, remaining uninterested and unharmed by its lack of resolution.

If people were permitted to run their own communities, they could directly solve the issues they faced. Such a community would effectively spend its money for rapid resolutions to ongoing damage, sparing its people the psychological drain and indignity of dysfunction. This in turn would free them to face objectives other than dealing with wreckage.

Popular organizational structures are known for their common failure, but are repeated out of familiarity and laziness. Their advocates aren’t serious about achieving solutions. More clever practitioners go a step further and shift inherent costs of damage on the public and subsidize shortcuts that hide uselessly unproductive approaches.

For example, some employers think a net savings is achieved by importing labor from a foreign country, yet a house, car, and family expenses in the community cost the worker the same, no matter their origins. Nor does a person’s nationality lower city’s costs for infrastructure such as schools, roads, sewer systems, and police.

Costs can be shifted onto the public, whether by the employer who lowers wages to make the worker a consumer of more government resources than his taxes pay for, thereby burdening taxpayers, or by encouraging workers to cram like rats into a single family home, lowering property values for the whole neighborhood, sending idiot kids to public schools which ruins their quality, and transforming the area into a safe haven for trash, noise, and loitering.

We should look at the total cost of damage, set about preventing it, fix its consequences to restore normalcy, and insist upon an honest accounting of its actual costs and causes.