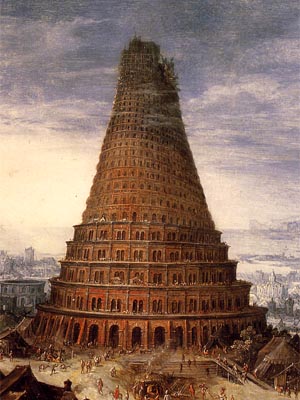 We all know what postmodernism is, or rather that it’s a topic. Since it aims to upset the clear definitions that are viewed as socially manipulative, it eludes definition quite often, but to say it’s a kind of fuzzy logic is a good ballpark statement.

As a quick definition, postmoderns are former liberals who have become dissatisfied with the methods and logic of liberalism. If capitalism, Christianity, imperialism and fascism are bad because they manipulate terms, liberalism does the same — which means the stated goal of liberalism is at odds with its methods.

Their primary fear is that of narrative, or that we tell ourselves a story about our existence and purpose that is meant to control us. Most people don’t acknowledge this, but Friedrich Nietzsche kicked this whole thing off with his first published essay, On Truth and Lies in an Extra-Moral Sense — lest I’m not clear, this is the foundation of postmodernism here:

The “thing in itself” (which is precisely what the pure truth, apart from any of its consequences, would be) is likewise something quite incomprehensible to the creator of language and something not in the least worth striving for. This creator only designates the relations of things to men, and for expressing these relations he lays hold of the boldest metaphors. To begin with, a nerve stimulus is transferred into an image: first metaphor. The image, in turn, is imitated in a sound: second metaphor. And each time there is a complete overleaping of one sphere, right into the middle of an entirely new and different one. One can imagine a man who is totally deaf and has never had a sensation of sound and music. Perhaps such a person will gaze with astonishment at Chladni’s sound figures; perhaps he will discover their causes in the vibrations of the string and will now swear that he must know what men mean by “sound.”

It is this way with all of us concerning language; we believe that we know something about the things themselves when we speak of trees, colors, snow, and flowers; and yet we possess nothing but metaphors for things — metaphors which correspond in no way to the original entities. – Friedrich Nietzsche, On Truth and Lies in a Non-Moral Sense

We set language in stone as “meaning,” even though it’s more appropriate to compare language to a paintbrush and colors, then from it we make an Official Story and punish anyone who deviates. Originally, the official story was kings; then it became We The People rising up and making things equal.

You can see our new official story in just about every entertainment and news item. In Hollywood movies, the lone misfits bond together and elect Pedro; in rock ‘n roll, the misunderstood loner finally gets one over on the law; in books, Harry Potter overcomes discrimination against muggles and drives out the evil overlords.

Our politicians use it, too. It’s us the equals against the Hitlers, Gaddafis, bin Ladens, Stalins (oops… don’t mention that one) and Mubaraks of the world. We bring officially designated truth and justice, and they are malignant throwbacks to a hostile time.

But many people are dropping out of this narrative. For one thing, it’s old — it started in 1789 with the French Revolution, and has been consistent ever since. It also obviously doesn’t work, because we keep fighting the same fights and things are getting worse, not better.

The postmodern project of overcoming binary thought, however, is more difficult than it may appear. First of all, one cannot simply flip the terms and privilege what was once diminished â€“ that would merely replicate the binary in inverse. The issue is not which term is privileged but the false belief that existence can be divided into two distinct, competing parts. Thus the task of the postmodern activist became the blurring and problematizing of distinctions in order to destroy dualist thinking.

In light of the traumas of modernity, where millions were slaughtered because they fell on the wrong side of the imaginary Aryan/non-Aryan divide, the project of deconstructing binaries should have been a positive development. In fact the primary way of disturbing categories â€“ pointing out that the primary term is only defined through exclusion of the other â€“ might have effectively stalled the pseudo-scientific Nazi eugenic project. The problem with the postmodern approach, however, was that it came too late. While it could have offered a way out of the genocide of World War II, by the time the project of deconstructing distinctions was widespread in academia and had filtered down to society at large, oppression lay not in the maintenance of dualism but in the opposite: increasing hybridization. That is the irony of contemporary philosophy: what we take to be a tool of resistance, the application of cutting-edge theory to our contemporary moment, turns out to be a hammer of our oppression. And by rejecting binary thought outright, we were not challenging the status quo â€¦ we were helping it along.

While the chorus â€“ composed now of cyberpunks and activists joined by capitalists and technocrats â€“ rejoices in the indistinguishable difference between online and offline, organic and synthetic, man and machine, the most crucial distinction of all â€“ that between resistance and complicity â€“ is collapsing as well. Unless we can discover a way to critique the system without furthering the system, we shall be lost. – Adbusters, “The Birth of Altermodern”

Is it possible that the liberal narrative is as empowering to control as the conservative one? If narratives are the problem, then obviously; if we can have a truthful narrative, or a semi-truthful one that’s more realistic than what we have, we should look into it.

But in the meantime, we should not trust the absolute truth whenever it comes knocking.

As a good conservative, I am reminded of how often we distrust the absolute, universal and official version of events. We like flexible, organic structures like community, culture, heritage and abstract ideals like faith and pride. We don’t like rigid rules and narrow definitions set on paper, administered by bureaucrats who would otherwise be unemployed for reasons of incompetence and personality disorder.

However, the people we are now calling “the postmoderns” are not conservatives, usually. They are normal people who drifted left because all their teachers, entertainers and friends seemed to be left-oriented. Now they’ve turned from apathy to a weaponized cynicism, looking at the left as another tool of control.

Control after all is an outward-in phenomenon; it is applied to us from without. But values, culture and heritage are inward-out phenomena, meaning that we adopt them because we find them meaningful and then apply them to the world around us.

Someone who was (or still is) modern believes that:

What do postmoderns think of these modern beliefs?

Hegel’s use of Greek dialectic to introduce what has become the core of the postmodern view that “truth” evolves and is culture/context dependent is the key issue in the change. – William S. Jamison, The Dilemma of Postmodernism

The modern time carried with it many curses. Our modern conservatives lost sight of the Romantic ideals of their movement, and ventured too far into functionalism to see the big picture; modernism is defined by the liberalism that brought it into being, and whether one is conservative or not, it’s time to be cynical of that calcified dogma that liberalism repeats still today, straight out of 1789.

Fragile symbols | The state of the ship