The state of the ship 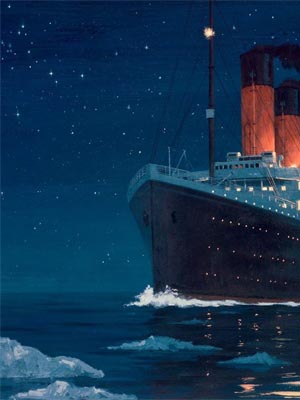 Whoever it was that first coined that phrase, had it right. He noticed something…

The State is no longer much like a ship, once constructed of the best materials available, to perform a specific purpose, and able to perform that purpose, out on the trackless deeps. A low-lying island, no longer able to navigate, with purpose, to its destination; a known place, or an as-yet unknown one. Unable to survive, whatever the forces of nature have to throw at it, or whatever the forces of human-failing have to put in its way.

Cannons no longer line its gunwhales: they might prove dangerous to pirates. The copper has all been stripped from its keel by lawless youths. Its unprotected rigging rots, and chaos defines its crew.

The ship is a complex ruin, and no one man may sail it confidently. For many are needed, each with a specific task to perform. The tasks are varied and unlike each other, thus those who perform them must be specialized to those tasks. Alas nobody can be found, that knows anything about it.

Certain tasks require several to carry them out. Others, only one. No one person runs everything, but one must organize the many: The most popular minority representative.

He, or she, is not arbitrarily chosen: a popularity contest is necessary. He, or she, must know nothing about his or her business. He or she must be absolutely unqualified, and completely untraditional. He or she must say grand things that were previously prepared by somebody else and above all, must champion some kind of “alternative lifestyle choice”. Yet he, or she, does not run the ship.

Nobody runs it at all. Nobody will accept the responsibility.
If somebody did, his or her job would be to make sailing decisions, based upon his or her expertise in sailing. He or she would know the ship, know the weather, and know what he or she could, and could not do with these elements.

There might be a bosun, a coxswain, a navigator, lieutenants and midshipmen. Yard-men, top-men, helmsmen. lookouts, and carpenters. But there are not. There are liberals, greens, transvestites, feminists, undocumented immigrants, homosexuals and female clergy, ill-qualified to be at sea at all, each of them nominally equal and all unwilling to be told what to do, or when and how to do it.

Many men, women, both, or unisexual, advised by a few, and beholden to no-one. Cooperating to ruin this Ship.

At the peak, is the crow’s nest; with no lookout: no seer, no primary navigator, no feeder of information to the Captain’s decisions. Who then ignores the missing sailing-master, and the non-existent lieutenants. Thus their decisions are arrived at, by seance, or by dice-rolling. Yet no-one decides.

The weather is often inconvenient. But this is negotiable. Whatever replaced the sailing-master pays scant attention to the weather, and sets the sails according to the current fashion in offshore sailing. The people who once would have been yard-men, are called, along with hands at the running-rigging.

Courses, lower and upper. Top-gallants, perhaps. Royals, even sunsails, if all is well. Fishermen, mizzen, mizzen-top and staysails. Who cares? As long as it looks good to outside observers…
Orchestrated, these things would happen, but lacking orchestration, results can vary.

There is a language of government, here: unfamiliar to those who do not govern: Things, Other Things, Whatsits and Thingumbobs. Stuff and Other Stuff. This and That. Turn Left and Turn Right. Chaotic and random. Utterly unreliable. Thus the Ship, of sea, or land, is piloted.

The ship is ordered from outside to inside. The hull must not be allowed to discriminate against the sea. Thus it may be leaky, without repair. The pillaged copper embraces the immigration of marine worms. The empty cannon ports invite pirates to be treated equally to the crew.

The captain underlines the chaos, aided by his or her lieutenants and men or women-at-arms. The ship’s company are socialist comrades, pulling imperceptibly for a common cause, but loathing each other the while. They do not all like each other, and this is a serious factor in all this complex uncooperation. It may well be the final thing to sink the Ship.

The sailing-master may once have been able to override the Captain, to a point, in exceptional circumstances, but alas, there is no longer anyone who can.

Coming into harbor under full sail is a matter of principle, since it looks mighty good to onlookers.

The Ship has enormous momentum, and comes without brakes, but so what?

Likewise: laying rubber when getting underway is counted a good plan, since the Ship’s inertia equals its momentum. Fun can be had, this way.
Balance, patience, and foresight, all are considered outdated and prehistoric in the running of the Ship.

There may be passengers, who must not be expected to pay their way, thus in no way helping to finance the Ship. For there are taxpayers who have already paid for the ship. And since they could afford to pay their taxes, can swim to wherever they wish to go, leaving Ships for the underpriviledged victims of society.

There may be cargo, to help make this Ship pay. Arms, for example, or drugs. Lastly, there may be ballast, to keep the Ship as full as possible, with no thought given to that funny painted line on the hull.
Passengers who do not intend to pay, are actively encouraged, along with excessive ballast, in the form of dead-weight bodies who perform no useful purpose at all. More people to party with.

Every part, every crewmember, each piece of cargo, and every living body, has its part to play, and must exist for the good of the Party.
Too much ballast, too much cargo, too many passengers, and the Ship sinks.

Too few lookouts, an unqualified Captain, a make-believe sailing-master that bluffed his way into the job: same result.

Not a problem. Indeed not. The taxpayers can always fund a new Ship.

The State of The Ship is a State, indeed. It must be seen this way, for reason to prevail.

If nothing else, it’s a fine make-work program for the shipbuilding industry.
And anything that takes a bite out of the over-population-problem just has to be a good thing.