The People’s History of the People of the United States 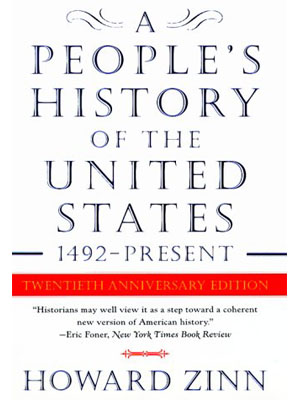 A book that gained popularity in the last decade as the country swung leftward was Howard Zinn’s A People’s History of the United States. Let me save you time by saying it is the usual leftist artifact: selectively chosen data, broad conclusions, and of course, it’s all someone else’s fault.

That line, “it’s all someone else’s fault,” could be used as the summary of leftism, if we also added responsibility as an alternate for fault. The practice of leftism is that of deferring what communities, families and individuals did to a great catch-all, which is government. However, since we fear government, it has to be motivated by “safe” goals like wealth redistribution.

In a more realistic view, the role of government should be adopted by individuals, families and communities because only those are inside of civilization, not contractors of that civilization designed for profit from being its caretakers and controllers. Let’s look at a history of how people have abandoned their actual goal, and what the consequences are for our society. It’s a people’s history — of the people themselves.

We are encouraged day in and day out to live our lives in the grip of pity. Pity makes us feel powerful and wealthy. When you feel guilt and pity others, and give them things, other people see you as a bold White Knight who has come to save us from inequality. It makes groups of thoughtless people, like at bars or political rallies, adore you for your Christ-like devotion to raising the unraisable.

A counteraction to this is recognizing that almost all of humanity is a failure. Very few people are productive; most just imitate what others do, hoping for the big score someday. The message of pity and handouts is that this behavior is correct. Someone else should do this for them. This keeps them helpless, and encourages the useless to drown out the useful. Nature is the way it is for a reason. Pity none and feel no guilt.

The consistent myth from even before the French Revolution is that people are oppressed. This word migrates in meaning from “machine gun at the spine” to any limitations on them doing exactly what they want to do whenever they want to do it. Oppression is a convenient catch-all for explaining one’s failure to do anything, or any problem. It is the modern form of the ancient scapegoat, where mythological fears were vested in a sacrificial animal.

A solution to this is to realize that no situation magically appears. If you have bad leaders, it’s because most of your people are cool with that. If your society is in disarray, it’s because people are behaving like idiots. If vicious corporations rule your world, it’s because your fellow citizens cannot resist buying their products. The solution to oppression is not revolution, but getting involved and altering the course of history.

Most modern people live in the grips of two forces: cognitive dissonance and passive aggression. Cognitive dissonance is what happens when expectations do not meet reality; you change expectations and argue those were what you always wanted. Passive aggression is when you act in such a way to provoke others to do something you can take offense at, and use that as a pretext to demand things from them. The root of both is validation: either in being so validated as to ignore reality, or so validated that you feel a right to act as convenient for you in denial of other needs, and then to be offended when others don’t go along.

A common modern practice is to walk through life with zero regard for others or the objects around you and to move far more slowly than traffic. When someone goes around you, you can get offended at them for not respecting your boundaries. You might even start a fight! Best of all is that you’re daring people to challenge you, knowing that if they don’t give in with your selfishness, you can invoke other people to defend you because you’re innocent, after all.

The solution here is to recognize that absolute rights make people into brats. I don’t have the “right” to walk at any speed; I should walk at the speed of traffic or go elsewhere, instead of making other people late and frustrated. No one is such a special snowflake that they can act in denial of the obvious. Even more, we should take away the retributive and negative (“freedom from”) nature of rights. You have the right to get a clue and get with the program, and not be interrupted if you’re doing that.

Another area of modern insanity is tolerance. Our society is pluralistic, which means that like the most boring committee meeting ever, we have agreed not to agree. Thus everyone gets their own values system and behavior code and the result is social chaos. Even more, this encourages nasty baiting behavior where people take advantage of the lawlessness and do blatantly selfish things, and force you to clean up after them because you care more, which makes you their slave.

For example, someone will feast on delicious junk food and then leave the trash in a public place. They may even leave it on your yard. What can you do? You can confront them, at which point they will be unreasonable. Or you become the slave to the fool, and clean it up yourself. At that point, darkness will gather in your heart. The solution to this one is simple also: have a social standard of behavior and shame those who deviate. Make it clear to them that that is unacceptable.

Most modern people will be horrified by these ideas. They go against everything our society stands for. Then again, as our society runs out of money and excuses while social chaos swallows its last functional remnants, it’s time to “think outside of the box” and bypass the taboos that have kept us caged for centuries.