The Magna Carta (lives in infamy and soon will perish) 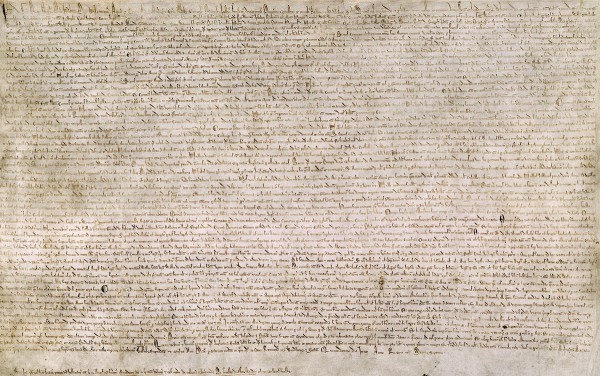 This week most of the West celebrates the 800th birthday of the Magna Carta. No sane person would see this as a positive situation, because that document ushered in one of the foulest human creations: the determination of leadership through the relationship between financial interests and the masses. Previously money and power had been separated by removing its acquisition as a motivating factor, leaving wealth in the hands of aristocrats who did a much better job of minimizing its harms than the mercantilists to follow.

When the barons of England demanded rights which were universal and beyond the power of the kings, they created an alternate power structure which catered to commercial interests but, because those in turn relied on customers of the mass consumer variety, would quickly become a situation in which every plausible citizen no matter how uninvolved in keeping society afloat would have a vote. This created a channel to work around the question of leadership itself and replace it with a surrogate, namely utilitarianism, or what people think they want when asked in large groups with little in common.

The Magna Carta did more than just hijack power from the kings. It also changed the focus of power from the question of what should be done to create, develop and nurture civilization to the question of the individual, e.g. “What do I want right now?” Since the organizational principle of society has always been and always will be the trade-off of individual wants for what is necessary to do so that all may thrive, this short-circuits the impulse toward civilization itself and replaces it with a predatory self-interest motive, which in turn influences how people vote.

The new focus ignored civilization itself, which it took for granted, and focused on how citizens could maximize their own returns at the expense of that civilization. Although at first described as a method of allowing an equal voice for commercial interests, the new regime rapidly became a way for commercial interests to take over civilization itself. The entire question of leadership shifted from a shared goal of improving the nation and its habits, technology and values, to individual desires and individual profits. Each person became a contrary voice working against civilization itself, because now the two goals were at odds and reduced to a bargaining situation.

Once a society changes its focus from leadership to utilitarianism, or what the largest plurality of people think they want at a given time if phrased in A-or-B styled questions, it loses the ability to discuss improvement and maintenance of civilization itself because that goal contradicts what citizens will inevitably demand, which is more benefits to themselves. Self-interest, when not tied to a sense of communal dependency on common institutions and spaces, becomes as parasitic as crime but hides itself behind politeness, formality and politics.

This in turn corrupts the nature of the word “should,” as in, “What should we do about this?” Previously, the term should contained a notion of working toward an end, as in what should we do to preserve and develop our civilization. When the focus turned to the individual, “should” took on an air of universality, based on the lowest common denominator that all citizens have between each other, which is self-interest in the short-term and oblivious to the bigger picture of the long-term, consequences of actions and civilization itself. This removes any kind of cause-effect thinking where citizens are aware of what effects their actions have in the future, because the future is not even considered. Only demands now, and not how to achieve those demands.

As a result, civilizations which go down this path rapidly head toward becoming subsidy states where, instead of demanding performance before reward, the State rewards citizens simply for being alive and hopes to extract performance from them with a public ideology and the ability to shame them for non-compliance. As found out in the Soviet Union, Venezuela, Cuba and many other places, this process does not lead to better results but to impoverishment of the nation and its domination by ideological fanatics with a tenuous grasp of reality. This is the long-term effect of removing focus on leadership and turning instead toward what pleases the citizens in the short term; of course they will eventually want free money, and very few of them understand or care what is required to produce it.

The ugly truth of humanity is that in large groups we revert to our simian state. We follow what seems to be the group opinion because we have delegated authority to the group on the assumption that individuals do not inherit the consequences of group decision. This is why a mob will attack viciously until its own members start paying the price, at which point its inherent cowardice takes over and the mob fragments. Creating a collective government of the nature that democracy demands produces a permanent version of this mob and, in order to preserve itself, it makes its perennial order of business the process of eliminating those who might make any single member face any consequences for his actions: the elimination of ideological enemies.

It is not surprising thus that, after achieving their own version of the rights provided by the Magna Carta, every civilization which experimented with this path followed a similar series of internal collapses that presaged the lapsing into irrelevance of the larger society. First there is a pleasant anarchy; then, a sense of obligation to subsidize others; finally, a mad and accelerating impulse to destroy all who have more than the average or who resist the dogma indoctrination. Societies go from celebrating freedom to a pathological desire to extinguish it within a handful of centuries.

Long before these results became visible, the Magna Carta started the West down this path to doom. Its ultimate effect would become a severing of action from responsibility, but the financial interests which motivated its adoption did not see it at the time. All they wanted was to enable themselves to have greater profit without performing the acts of leadership, as a king does, that consider the long-term effects of ever action on the health of the society as a social ecosystem, its citizens, their genetics and their long-term future. The kings were portrayed as bad evil no-fun guys, but perhaps they were simply more intelligent and saw what the financial types did not, which was that this path led to short-term rewards and long-term losses.

99% of human activity centers on distracting from the actual issues in life, such as the health of a civilization or the need for the individual to discipline themselves and find purpose. These are grim truths to life, like that one must eat one’s vegetables before pudding. These actual issues do not “exist” because they are based on consequences in the future, and every con man tries to create a mental wall between action (cause) and consequences (effect) by promising that during the time between the act and the result, so many good things will happen that the price seems inconsequential. Every time they fail to mention the many opportunity costs — what options were lost by picking one over the rest — and secondary effects of the act.

For that feel-good warm and damp modern sensation of uplifting symbols and religious faith in the safety from consequences provided by being in a crowd, the Magna Carta delivers a whopping blast of good times like those cocktails with the little umbrellas in them. Eventually however morning arrives, and in addition to the hangover, before us lies the wreckage of what we did when too drunk to consider the consequences of our actions. Such is the 800th birthday of the Magna Carta, and those who realize this see clearly the case for its repeal.