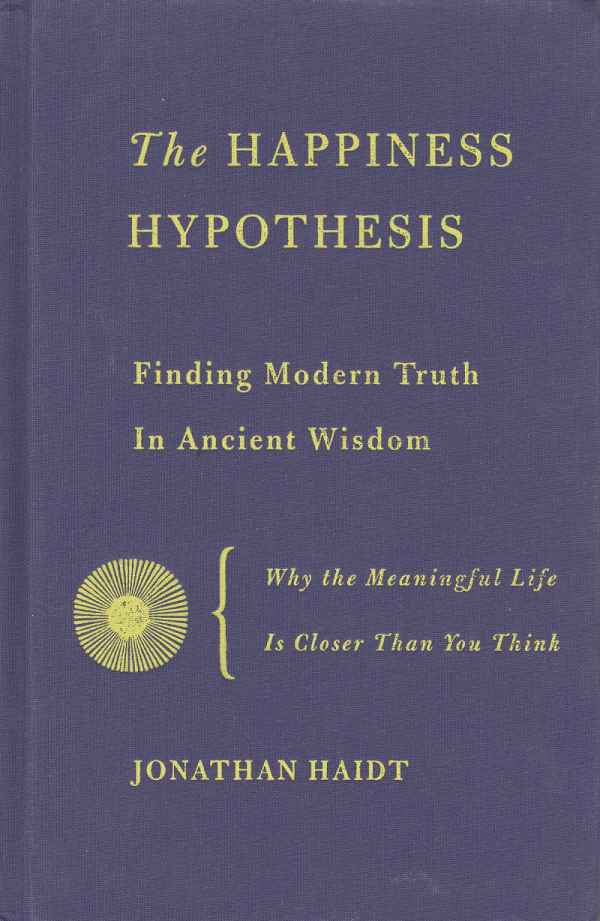 The record of scientists and engineers in philosophy is fairly dismal. Lacking the perspective on argument as a method of incorporating multiple angles of analysis at the same time, they zoom in on single angles and, as is the tradition in their field, draw broad conclusions from details of the data. The result is inevitably populist philosophy that appeals to people because of its oversimplification, but falls apart on further notice. With this in mind, Jonathan Haidt’s attempt to cross over into liberal arts land is not only ambitious, but a partial success marred by failure in both philosophy and mechanics.

With The Happiness Hypothesis, Haidt tears into a question of particular relevance: where do philosophy and studies from sociology, psychology and neuroscience overlap? He does so from his ultimately liberal perspective but manages to keep an open mind toward many good ideas while trying to shift the conversation in a liberal direction, but his thesis ends up favoring a conservative idea. He presents a formula for happiness that appeared in the research of others but Haidt explains more clearly and connects to related concepts:

In this case, experienced happiness (H) is equal to a biological set point (S) plus the conditions of life (C) plus the amount of volunteer activities (V) in which the individual subject engages (91). Biological set point refers to the innate degree of positivity hardwired into the individual; conditions of life encompass socioeconomic status and limits on the individual imposed by physical and mental condition; and volunteer activities refer to any engagement in the community which is not strictly mandated by immediate self-interest. What is interesting about this formula is that it debunks the liberal model of happiness. First, people are wired toward a certain outlook. Second, they are not incredibly disturbed by even a bad condition in life because they quickly adapt to it. Finally, acting for the benefit of society as a group — instead of imposed methods of making people equal — seems to bring the greatest happiness. As with all that Haidt does, he makes these revelations slowly and hides the good bits in the details so as to avoid directly challenging the status quo, then later cleans up with some positive noises about the usual assumptions.

The first half of the book provides the most interesting information and shortly past the formula the writing changes into a breezier, more conjectural and less factual style. This contrasts the early chapters which hit a sequence of ideas in rapid order and produce the sense of covering vast ground, then loosely tie those thoughts to philosophical musings, where the later chapters focus first on a general philosophical idea — usually drawn from the odious Buddha — and then expand it to cover enough areas to rope in some tangentially-related research. Some exceptions exist, but lower density and more conversational logic in the second half makes it worth skipping for the most part. One such blip comes in this discussion of moral reasoning:

This turn from character ethics to quandary ethics has turned moral education away from virtues and toward moral reasoning. If morality is about dilemmas, then moral education is training in problem solving. Children must be taught how to think about moral problems, especially to overcome their natural egoism and take into their calculations the needs of others. As the United States became more ethnically diverse in the 1970s and 1980s, and also more averse to authoritarian methods of education, the idea of teaching specific moral facts and values went out of fashion. Instead, the rationalist legacy of quandary ethics gave us teachers and many parents who would enthusiastically endorse this line, from a recent child-rearing handbook: “My approach does not teach children what and what not to do and why, but rather, it teaches them how to think so they can decide for themselves what and what not to do, and why.” (164)

In this example, Haidt reveals the difference between ancient views of morality and those in the present: in societies which were not pluralistic, there could be a single standard of moral behavior, which put the focus back on the individual in the form of the question of whether they acted according to that standard. Because culture tends to form a pyramid from a few basic ideas outward, this standard concerned goals more than specific rules, leaving the specific adaptation to the individual. As society becomes less unified, and eventually adopts multiple moral standards, the question moves from moral goals to personal behavior for the purposes of appearance and takes on a defensive role, with individuals offering reasoning as a form of excuse-slash-rationalization after the fact. Haidt does not explore those issues, which are beyond the scope of this book in addition to being hopelessly un-PC, but he provides the keys to that level of thinking.

Earlier in the book, during the more exciting section that mated modern research to philosophical observations rather than broad philosophical conclusions, Haidt explores hard genetic determinism and the concept of inborn character, ending up a step away from discovering nobility as a character trait and the basis of the caste system:

When we combine the adaptation principle with the discovery that people’s average level of happiness is highly heritable, we come to a startling possibility: In the long run, it doesn’t much matter what happens to you. Good fortune or bad, you will always return to your happiness setting — your brain’s default level of happiness — which was determined largely by your genes…If this idea is correct, then we are all stuck on what has been called the “hedonic treadmill.” On an exercise treadmill you can increase the speed all you want, but you stay in the same place. In life, you can work as hard as you want, and accumulate all the riches, fruit trees, and concubines you want, but you can’t get ahead. Because you can’t change your “natural and usual state of tranquility,” the riches you accumulate will just raise your expectations and leave you no better off than you were before. (86)

Among other things, this model refutes the liberal idea of political equality and rising wealth creating happiness. It also subverts many of the notions of consumer society. While most of this book offers essentially background information, interesting cross-overs like these are frequent in the first four chapters and scattered throughout the book. Despite the generally over-written second half and its resulting sparseness of information, this book provides a great reference point for conservatives by debunking many human myths of happiness, and pointing instead toward the type of community-involved society that a civilization unified by heritage, culture and values could create. With a hard edit, this one could go down to approximately a hundred pages and be more effective.