The Fall Of Democracy Becomes Plausible 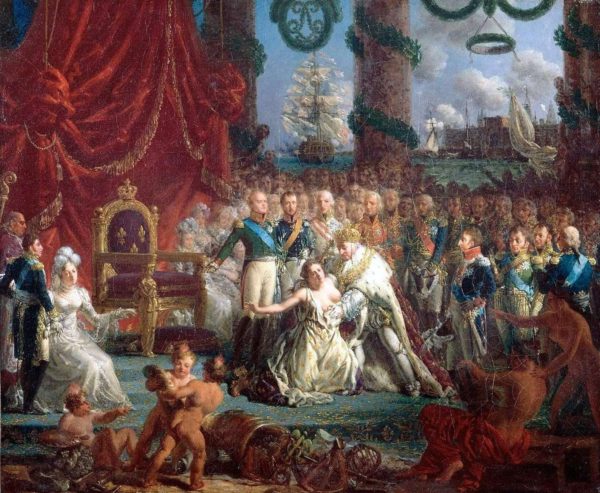 The American Interest asks a vital question, citing this study (via Outside In:

But it does highlight the fact that the democratic discontent of 2016 is not just a temporary episode can be allayed by rebuffing Putinâ€™s shenanigans or hectoring voters about their irresponsibility or putting the right technocrats in charge. The dark specter of illiberalism across the West is symptomatic of a deep and broad-based decline in confidence in democratic institutions and ideas that has been taking place for two decades.

Liberalism (the early stages of Leftism) rose to power because of a simple promise: pacifism. Leftism surmises that by making people equally included in society, we can avoid the ravages of the class warfare that devastated Europe in the middle of the last millennium.

However, it has failed to deliver: inequality is ever-increasing, and our new elites are both incompetent and seemingly evil in their capacity to relentlessly advance destructive non-solutions to imaginary problems while ignoring real ones. The economies of the world have reached their end-stage, overpopulation threatens, social instability and decay are raging, and our leaders have no suggestions except to double down on what brought those problems in the first place.

As a result, people are rethinking the supposition that enabled Leftism, which is that we can use external control — an idea inherited from technological processes — to treat people like interchangeable parts and shape them into perfect citizens with rules, incentives and threats. Control is the idea that a centralized authority can use force to organize essentially identical units, which is the opposite of the ecosystem model that nature uses.

The end result of this poor thinking is that we operate by a simple rule: if it is human, it is good; this form of revenge on the natural order leads to promotion of incompetents and a proliferation of regulations which make daily life choking in its tedium and frustration.

Instead, people are looking toward natural-style (organic, ecosystemic, gradual) orders such those described in the four pillars: tribalism, aristocracy, positive incentive systems and some kind of purpose, goal and objective which by its nature is transcendental.

Tribalism means that culture and its values systems take the place of government and economy in regulating a society:

Jewish identity since the days of the Kingdoms of Judah and Israel had always been a tribal/national peoplehood. While tribal practices and customs (which are often incorrectly referred to as â€œJudaismâ€) and a strong biological link between many of the members are certainly present, Israelite identity was never based on either of these. Israelite identity has always been a tribal membership that goes by lineage (being born into the Tribes of Israel) or tribal acceptance (which is incorrectly translated as â€œconversionâ€). The identity Ashkenazi Jews have today is identical to that of King David whose great grandmother was a Moabite convert, but was nonetheless a Jew by virtue of being born into the Tribes of Israel by lineage.

Aristocracy means a reversal of the idea of external control. Instead of seeing who masters the system, we look at who is good (moral, intelligent, strong leadership) and give them power and wealth to manage. This gets us off the treadmill of needing constant growth and the resulting “tragedy of the commons”.

Having a goal also removes control. Control exists for itself, alone, although it justifies its power by claiming that it preserves social order. This fails because people become focused on satisfying the needs of the System instead of acting toward what is needed for civilization; control replaces goals. The modern West and the Soviet Union have both failed because the needs of the System replaced the goals of civilization.

In this change from a Francis Fukuyama-styled “end of history” where liberal democracy with market-supported socialism is the final state of humanity, we see the refutation and affirmation of the Unabomber’s thesis that industrial technology is our undoing:

The Industrial Revolution and its consequences have been a disaster for the human race. They have greatly increased the life-expectancy of those of us who live in “advanced” countries, but they have destabilized society, have made life unfulfilling, have subjected human beings to indignities, have led to widespread psychological suffering (in the Third World to physical suffering as well) and have inflicted severe damage on the natural world. The continued development of technology will worsen the situation. It will certainly subject human beings to greater indignities and inflict greater damage on the natural world, it will probably lead to greater social disruption and psychological suffering, and it may lead to increased physical suffering even in “advanced” countries.

Instead of industrial technology forming the root of our problem, we see that the theory of industry — take in raw materials, process them, and produce identical units — became the basis for the idea of equality, which because it replaces social order, requires strong State power to implement. Technology itself is not the problem, but treating civilization like a factory is.

As liberal democracy fails people will turn toward alternatives. As always, what people think in groups is wrong. One half will want Communism, and the other half, a capitalist dictatorship of the fascist nature. Instead, we should reverse the very core of our thinking, which is that Systems — themselves an idea arising from equality — can save us. We should look toward putting our best people in power instead, ruling ourselves by culture, and finally, having a goal other than keeping the group together through pacifism.