The essence of religion is realism 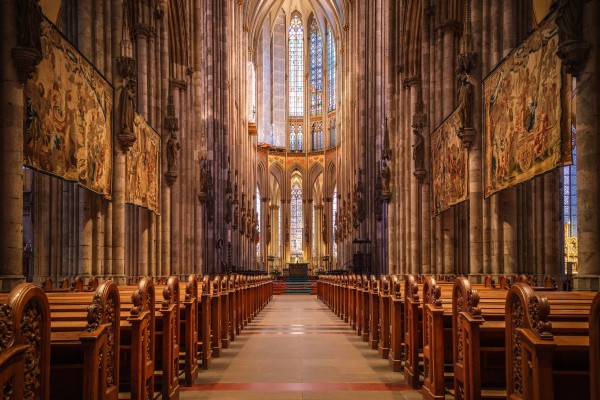 Religion presents a quandary for conservatives. On one side are those who believe that God/country/family is enough; on the other are the Nietzscheans and other realists who recognize that “country” is a substitute for identity, and “family” reduces community to slightly-broadened self-interest. We also see how religion can substitute for these other necessary things.

Religion is part of the answer, but not the answer. It presents a good starting point because it focuses people on the idea that they must reform themselves so that they strive to do good. It introduces reverence for nature, history and the distant future. It frames self-interest in a moral context. But that alone is not enough.

In addition to that reverent outlook, which can happen without religion, we need something else. Conservatives often ignore this and conveniently escalate religion to the universal solution, but even religion indicates our need for culture, heritage and identity. Like most things in life, religion operates in parallel (the theme of this blog) with other necessary elements.

Without culture and identity, and an aristocratic leadership, religion becomes lost and corrupted as it has over the past 200 years since the French Revolution. The fascinating conclusion to this puzzle is that in order to appreciate each of those elements, and most importantly to desire all of them, one must find reason to respect life and take it seriously.

For this reason, religion operates in parallel with “realism,” or looking at life through its consequences in reality and the principles thus upheld or denied, much as it requires parallel culture, heritage and aristocracy. None of those can stand without the other. The truth of this can be found in realistic religious writings like Romans 1:18-32:

For what can be known about God is plain to them, because God has shown it to them.

For his invisible attributes, namely, his eternal power and divine nature, have been clearly perceived, ever since the creation of the world, in the things that have been made. So they are without excuse.

For although they knew God, they did not honor him as God or give thanks to him, but they became futile in their thinking, and their foolish hearts were darkened.

Claiming to be wise, they became fools, and exchanged the glory of the immortal God for images resembling mortal man and birds and animals and creeping things. Therefore God gave them up in the lusts of their hearts to impurity, to the dishonoring of their bodies among themselves, because they exchanged the truth about God for a lie and worshiped and served the creature rather than the Creator, who is blessed forever! Amen.

For this reason God gave them up to dishonorable passions. For their women exchanged natural relations for those that are contrary to nature; and the men likewise gave up natural relations with women and were consumed with passion for one another, men committing shameless acts with men and receiving in themselves the due penalty for their error.

And since they did not see fit to acknowledge God, God gave them up to a debased mind to do what ought not to be done.

They were filled with all manner of unrighteousness, evil, covetousness, malice. They are full of envy, murder, strife, deceit, maliciousness. They are gossips, slanderers, haters of God, insolent, haughty, boastful, inventors of evil, disobedient to parents, foolish, faithless, heartless, ruthless.

Those who hate the methods of civilization — religion, identity, aristocracy and culture among them — try to style religion as arbitrary. They wish to portray it as its own domain, which chooses its ideals for its own convenience, rather than what it is: another method of describing reality and regulating individual behavior correspondingly so that civilization can thrive. Through culture, we study success in social and family matters; through aristocracy, success in war, diplomacy and leadership; through identity, principle and purpose. Through religion we discover success in discipline of our souls, but the subject of that study is reality itself.

And so the young man returns into the country of the lotus-eaters, and takes up his dwelling there in the face of all men; and if any help be sent by his friends to the oligarchical part of him, the aforesaid vain conceits shut the gate of the king’s fastness; and they will neither allow the embassy itself to enter, private if private advisers offer the fatherly counsel of the aged will they listen to them or receive them. There is a battle and they gain the day, and then modesty, which they call silliness, is ignominiously thrust into exile by them, and temperance, which they nickname unmanliness, is trampled in the mire and cast forth; they persuade men that moderation and orderly expenditure are vulgarity and meanness, and so, by the help of a rabble of evil appetites, they drive them beyond the border.

Yes, with a will.

Yes, he said; that is the way with him.

Yes, he replied, he is all liberty and equality.

Yes, I said; his life is motley and manifold and an epitome of the lives of many; –he answers to the State which we described as fair and spangled. And many a man and many a woman will take him for their pattern, and many a constitution and many an example of manners is contained in him.

Let him then be set over against democracy; he may truly be called the democratic man.

Both of these passages focus on the symptoms of degeneracy, itself a product of degeneration in the Darwinian sense or loss of higher genetic characteristics because, in the hands of social and cultural influences, they have become less valuable and therefore underused, gradually dropping out of the population. The first step toward degeneracy is changing behavior, which changes the economics of civilization such that bad is rewarded and good, by de facto inversion in the zero-sum game of competition that is society, punished.

Contrary to what is adherents sometimes say, religion alone is not a path to survival but to self-destruction. On the other hand, in conflict with what its detractors say, religion is not arbitrary. These rules exist for a reason which is that they provide the optimal survival of a tribe, and thus longest resistance to degeneration, over the centuries as has been witnessed by wise people in the past, repeatedly. Like science, religion is a repository of knowledge, but it describes the metaphysical using metaphor instead of attempting the detailed approach of science. Abstraction allows flexibility over the changes brought by the passage of time, and for that reason, religion is highly abstract. But it is neither nonsense nor a singular solution.