The essence of liberalism: the cheerleader effect and self-esteem 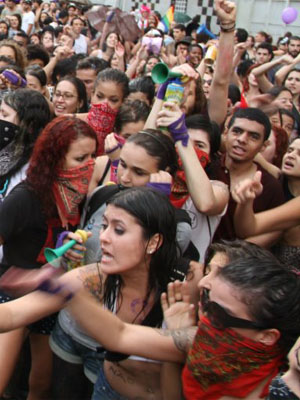 It caught everyone by surprise, how successful liberalism has been.

I should clarify: liberalism is successful at taking over societies. It is not successful at making them thrive. In fact, it tends to destroy them and leave behind burnt shells with third-world levels of social order, hygiene, corruption and morality.

In other words, liberalism is a successful illusion and motivator, but doesn’t work so well in reality. In contrast to what your television says, reality does not have a liberal bias, because if it did, all those liberal republics would be doing well.

Instead we have disaster.

The postwar period showed great liberalism in both Europe and the USA. This resulted in sexual liberation, gender liberation, multiculturalism and other equality-based programs. The results are not encouraging. Society is more rule-based, more insufferably boring and prone to absolute insipidity lest someone take offense, less effective and people are slowly becoming obese, hyper-sensitive, neurotic and vengeful. Liberalism fails by any common sense or aesthetic standard.

But it’s still popular in the polls. This suggests to me not informed political decision-making, but a pathology. That is, a behavior that has its roots in the personality and needs that personality has which demand some kind of palliative care above and beyond all else.

Science has some tantalizing suggestions for why liberalism is popular:

A study published last week by scientists at the University of California, San Diego suggests that people look more attractive when seen in the presence of others than when viewed as individuals, a phenomenon known as the “cheerleader effect”.

The California study argues that the cheerleader effect is caused by our tendency to perceive faces in a group as an amalgamated average, rather than separate individual objects, and the fact this “average group face” is more attractive to us than the faces that make it up. (Group influence also affects our perception of how attractive someone is. Studies have shown that if others think someone is attractive, we are more likely to find them attractive too, regardless of how they look.)

The effect has been noticed in pop culture: in the US sitcom How I Met Your Mother, Neil Patrick Harris’s character points out a group of girls in a bar who collectively appear attractive, but on closer inspection display serious physical flaws.

I suggest that it’s much simpler than this somewhat arbitrary method. People look more attractive in groups because groups suggest validation. That is, the group has accepted them, thus they are assumed to have the characteristics of the group. Thus if that group is more often than not above average in appearance, members will be perceived to be of that standard — until examined closely.

Liberalism, which is a subset of Crowdism or the use of collective morality to enforce individualism, works through the cheerleader effect. Liberals set up a group, and define it as not-the-majority. Because they are not those who have succeeded in the status quo, they demand “equality,” which evens out the difference between success and failure. Thus anyone can join and be accepted. This makes them look rich and powerful because they’re gift-givers. Society doesn’t tolerate you? We do, because we’re so rich and powerful that we can afford to like everyone and accept everyone. Those who need to limit their social groups to functional people only aren’t making it rain like we are.

What makes the cheerleader effect significant is that it is what liberals have to offer. They are making you a trade: we let you into the group, but you have to go along with our jihad/crusade. The cost for entry is that all members must, when non-egalitarian behavior is seen, attack and do their best to destroy those who are not egalitarian. It is a gang, or a lynch mob, or even a squad of Bonobos terrorizing another over territory. It reduces politics from thought to a my-team your-team opposition.

You might think people would not do much to be in a gang. But this gang, by offering universal acceptance, is saying that you don’t need to fear socialization anymore. You will be accepted, so long as you join the jihad. Most criminal groups and terrorist groups also operate on this principle, which is why they often ignore outright deviant behavior by their members. What matters is the group, not the individuals, in either a positive or negative context.

Acceptance, like a friendly touch, can alleviate the pain of low self-esteem, something which is generally caused by dysfunctional circumstances. A child raised in a broken home sees no reason for his own existence, and no purpose to it either. As a result, he desperately needs a gang to join. Why not the gang of no standards? The gang of everyone’s OK? At least the child finally has a place.

However, by doing so, the child misses out on two opportunities. First, he misses the opportunity to clear his own thinking and overcome the barriers toward his own sanity. In other words, he loses out on the ability to impose order on himself and discover who he really is. Second, he is now enlisted in a blind jihad that knows no reason or limits, and like a Typhoid Mary of bad psychology, he now spreads it wherever he goes.

The worst part is that liberalism forces people to be compulsive. When you rely on something external to alleviate self-esteem, you become dependent on that thing, because without it, you’re a nobody. This forms a pathological union and explains why reality denial is so rampant among the left. After all, they don’t stand on their own; they’re beautiful because the group is beautiful. Or so the theory goes.

Liberals claim gun rights are “racist” | The need for a unified right.