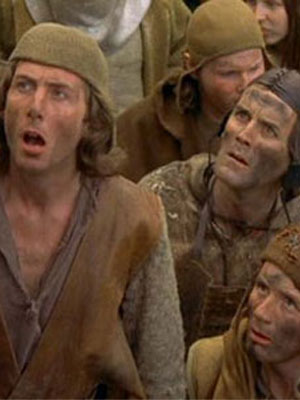 In 1789, a cancer was unleashed on the world. It is the notion that the individual is more important than anything else, even reality.

This mentality, called radical individualism, has a tendency to cause people to group together into gangs or mobs whose only goal is to make sure the individual comes first.

Since that time, our fortunes have steadily declined. Technology, which we were developing anyway, has accelerated. And yet we still work all the time and live in constant struggle.

This is the death within. Our brains are wired to look for evil attacking us from behind a bush, but when it comes from within, we don’t see it until it’s too late.

A good name for the death within is Crowdism because it is essentially a social disease. We socialize by making other people feel important, and when we do this in groups, we form mobs.

These mobs them demand utter destruction of anything but the individual. All culture, gender, common sense, heritage, and even any superior ability or wealth, must perish so that the individual reigns supreme.

At some point they even attack individuality itself, because those who have more personality are unfairly favored, and demand conformity to speech and thought codes so we can all be equal.

Every political movement since 1789 — civil rights, progressivism, liberalism, anarchism, leftism, communism, socialism, libertarianism — explodes out of this one thought, which is that the individual comes first before all else.

When you understand this, you see modernity for the farce it is. It isn’t a new idea; in fact, it’s the oldest idea because it was around before civilization. We escaped this “new idea” by forming civilization and working together to achieve things like hygiene and regular nutrition.

History is a process of humans slowly emerging from the primordial muck, interrupted only by one giant screwup in 1789 and the 224 years since in which we have failed to out-think the lie and thus relegate it to the dust-bin of human failure.

If humanity does not shrug off this illusion, it will self-destruct.

Here at Amerika, we retaliate with a few ideas:

Crowdism will always be popular because it appeals to a weakness in all of us.

The Greeks called this weakness hubris, which means a certain type of arrogance where we assume our preferences outweigh the logic of the universe. It is a fatal flaw.

Humanity will either conquer this momentary bout of illusion, or we’ll walk right back down that evolutionary path and become monkeys again.

At least in that case, our gigantic egos will be tempered by our inability to speak, and thus to lie, about our motivations.

Conversation with a postmodern hippie | Fixing our problems is easy