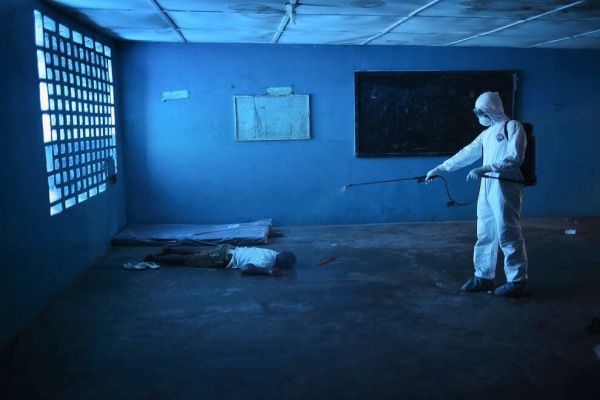 They woke up confused from fractured dreams, then groggily dug through memories to remember only a strange hooded figure, a brief pinch near the neck and then blackness.

Now they found themselves bound by ankles and wrists in a tent of plastic sheeting. A figure in a tyvek safety suit with a plastic window in the head-covering came closer, but the person was wearing a balaclava under the safety hood. He raised a syringe, but there was no needle on it. Their eyes tracked down the length to see that it was full of blood.

Each of these new subjects had been captured in the midst of an illegal but more importantly un-documented activity: illegal aliens, smugglers, homeless drug addicts. Each was now gagging down 10ml of blood injected into their mouths. This blood bore what the project leader called the “spore”: the Ebola virus.

He and his team waited patiently. They knew they had up to two weeks for each, and this had been planned for, so they spent their days playing tennis or drinking in the open bar on the estate he had rented for this purpose. When the first showed signs of fever, the team sobered up and re-assembled.

“All subjects now show signs of full-blown infection,” one of the mercenaries reported.

“Good.” Project Leader picked up his newspaper. “Milk ’em. And call the Candlemaker.”

The men in hazmat suits went into the next room where desperation hung in the air as the wretching, moaning and thrashing subjects were subdued with a single blow to the head and then hung upside down and drained of their blood. This was then comingled in a vat as the Candlemaker arrived.

Thin, austere and tall, the Candlemaker came from an old family in a rural area. Passed over for marriage to his favorite cousin, and then cut out of the family business, he became obsessed by revenge on a society that he felt had betrayed all that he aspired to. And thus he became, among other things, the leading expert worldwide in making a certain type of compound from a mixture of fragile oils, fats and alcohols.

He arrived in a converted florist truck with big barrels of compounds whose installation he supervised in a flurry of nervous tics that may have explained his lack of success with the favorite cousin. He measured, poured and mixed carefully, then made a test batch. He and Project Leader donned biohazard suits and mixed in a small amount of the blood, then went outside to test it, capturing the results on a pad of reactive paper.

Inside the Candlemaker mixed the full batch with the vat of blood, and sweating heavily in his tyvek suit, poured each into the containers offered him. These were then pressurized and sprayed down with diluted bleach, then dried and stored for delivery.

“Excellent work,” said Project Leader, and then shot Candlemaker in the back of the head with a silenced 9mm pistol, taking care to avert his head so he did not breathe in the bloodmist thrown back from the wound.

The Executioners then bent to their work. At a predetermined time, they were in place in one of America’s oldest malls, a vast concourse lined with high-profile branded shops under a massive ceiling far above. Each wore a pair of modified Google glasses which mapped out the area around them by temperature, highlighting areas of recent change. This allowed them to find air currents blown by the high-pressure air conditioning system which cost in a day to turn what the average American made in a year.

Hiding their canisters in shopping bags, empty displays and potted plants, the twelve Executioners left the building and took buses and trams to entirely random locations. At these, they walked to the nearest Starbucks, where a panel van picked them up. Back at base they showered in disinfectant and removed the latex masks that disguised their fingers and the invisible flesh-tone latex gloves that disguised their fingerprints.

At 11:49 AM, peak of the lunch rush, the canisters blew. Pressurized fluid and oxygen blasted past a double set of mesh creating a fountain of bubbles which reflected multiple colors in their foamy surfaces. Most people thought at first that this was a publicity stunt but when they saw the security guards rallying, they panicked and fled for the exits. Without police reinforcement, the uniformed security officers had to watch them flee. And yet, no one died, so for some time it was assumed that it was merely a prank.

Two weeks later, the first of the victims staggered into a hospital with a raging headache and flu-like symptoms. Overburdened with welfare cases, the hospital set her aside to deal with more serious injuries, generally from construction sites. They ignored her until she without ceremony bent over and vomited blood on the floor, and then in the grand tradition of people made bratty by their power, quarantined everyone in the same room together, converting one possible case into forty in minutes. The same situation played out at twenty local hospitals and clinics.

Far away, in a small town among the hills, the Project Leader watched the last of the bodies as it was fed into the crematorium. For a few thousand dollars they had purchased a key from an employee here six months ago; his was the first body to go in, followed by the Candlemaker and every member of the execution team. This left only the Project Leader and his two assistants.

The second assistant nodded. He did not like killing fellow Americans, but these days, brotherhood was dead in America. To be an “American” meant to arrive and get a job and start paying taxes, and nothing else. In his lifetime, second assistant had seen his hometown go from a happy place to a miserable one where in the name of being successful people became slaves while crime and decay raged out of control. It made his participation in this project feel more like revenge than profit.

“The day the brotherhood died,” he said quietly.

In the White House situation, experts — selected for ideological obedience as much as competence — looked at the email that has just arrived. Sent through a chain of anonymous remailers, it originated at a Seattle-area independent coffee chain whose wi-fi could be reached from the hills with a Pringle’s can extended antenna. No cameras in the hills, so no eyes on the perps.

The email began simply, reciting a demand for 40,000 bitcoin within 48 hours or there would be another attack. After that followed a block of base64 encoded data that turned out to be the genetic signature of the specific Ebola virus sprayed over the mall patrons, generating at least 200 cases in the most serious outbreak ever.

The President’s adviser explained that yes, it was still true that airborne Ebola transmission did not occur. By putting the viral material in a liquid mixture that formed microscopic bubbles, the terrorists had in fact created liquid-borne transmission, which was well-known to occur. They had just come up with an ingenious and cheap delivery system.

All the men in the room looked toward the President, wishing they had someone in the room picked for his leadership abilities instead of his ideological conformity. He stared back pugnaciously, both hating them and realizing that he could be sunk if this one did not get under plausible control soon.

How I Live Now (2013) | Circle of Treason: A CIA Account of Traitor Aldrich Ames and the Men He Betrayed by Sandra Grimes and Jean Vertefeuille