Circle of Treason: A CIA Account of Traitor Aldrich Ames and the Men He Betrayed by Sandra Grimes and Jean Vertefeuille 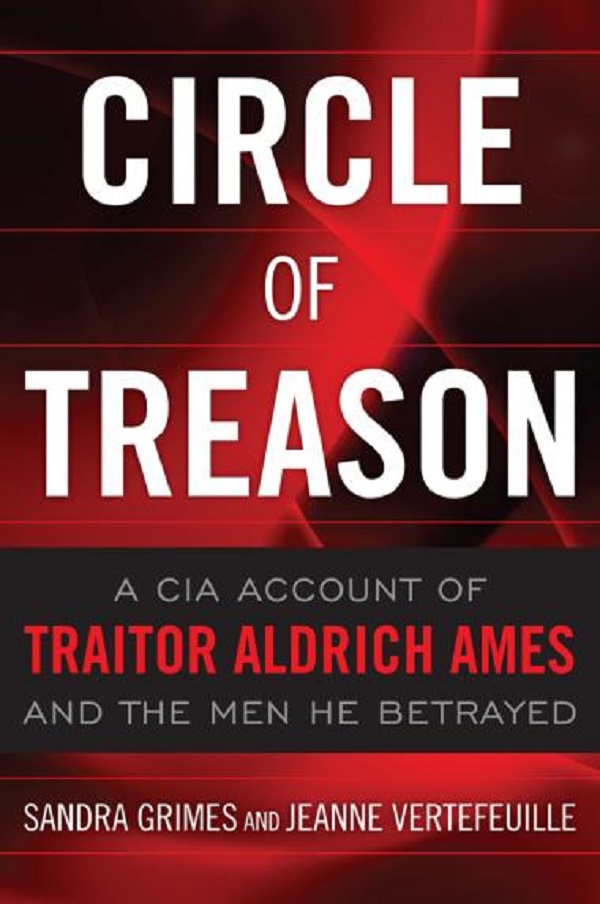 The most popular assumption among human beings proves to be a defense of inaction. The threat is not real; the dangers are overstated; nothing must be done. Just sit back here and enjoy the fruits of our — well, that of others, actually — labor. During the Cold War this mentality allowed the public to conveniently forget about traitors like Kim Philby in the UK and Aldrich Ames in the United States.

As the veil of secrecy has been lifted from those tumultuous years and it has become clear how much social, economic, political and environmental damage the Soviets did in addition to their unparalleled legacy of mass murder, the American public has for the most part conveniently switched off its brains and ignored the importance of that revelation. But long before we could comfortably doze off in our chairs and pretend that the torture, executions and enslavement did not exist, the Cold War was still a going concern in which it was not clear that the force of “better” would prevail over “outright evil.” I say the Soviets were evil because, in the name of the individual they created a regime that not only committed numerous crimes, but broke the spirits of those within it and unfortunate enough to fall under its control. In comparison, Hitler, Mussolini, Tojo, Franco and every tyrant short of Genghis Khan seems gentle if not inconsequential. Twenty-five years after the fall of the USSR we are still uncovering bodies. But not everyone saw the evil as evil. Many chose to see it as good, or at least convenient and Ames will go down in history as one such malignant useful idiot.

Ames worked at the Central Intelligence Agency (CIA) and from a fit of pique and not being recognized as more important than he was, for over a decade years he smuggled secrets to the Soviets that led to the execution of a number of high-ranking American “assets” or double-agents within the Soviet government. He was well-paid for this venture, receiving $2.5m in 1980s American dollars, which were worth quite a lot back then. Two analysts, Sandra “Sandy” Grimes and Jean Vertefeuille, found themselves tasked with finding a mole but had no idea that Ames was the culprit. All they knew at the start was that the Soviets were systematically rounding up double agents, or employees of the Soviet government who were secretly working for the CIA, and executing them after torture. At first, the analysts were uncertain that a human leak, or mole, existed, but after testing other parts of their network it became clear the Soviet KGB was receiving inside information.

Spy stories like this are difficult to tell because in addition to the “fun” cloak and dagger stuff, spycraft is fundamentally a war of brains. Poring over documents, obtaining information, and comparing it to reveal the big picture are as important as creeping around in the field with only a Walther PPK and gumption to save the day. Analysts remain the largely unsung workers of this task because voters glaze over when the role of analysts is explained. Circle of Treason: A CIA Account of Traitor Aldrich Ames and the Men He Betrayed was written with the cooperation of its authors and the CIA, so it necessarily skips over some facts, but on the whole captures the vision of these two analysts as they systematically eliminated possibilities and zeroed in — often with gut instinct as a guide — on the identity of the leaker, and then began the arduous task of finding proof. This was complicated by the fact that both knew Ames.

To Sandy the Rick Ames of the 1970s and early 1980s was simply a nice guy — easygoing, a good conversationalist, and comfortable to be around. Like an absent-minded professor, he was unpretentious in dress and manner. His hair was unkempt, his sock colors often did not match, his shirts were rarely pressed, and he was often late for the carpool whether he was the driver or the rider. However, none of that really mattered to his contemporaries at the office. Rick was just Rick — a gentle sort whose fellow officers enjoyed while laughing at his goofy physical appearance. This is not to say he was always happy-go-lucky. Occasionally he became irritated, particularly if his operational judgment was questioned by those at his level. They might be equals, but he was a greater equal. (178)

Grimes and Vertefeuille, as much as they can given the need for secrecy to this day about Cold War spying, reveal the painstaking exploration of the connection between the leaked data and how it eventually revealed Soviet double agent Aldrich Ames. The story grips the reader mostly because of the intense sense of consequence at every turn. People are dying; vital secrets are being lost from the US or taken from the Soviet Union, enabling the West to fight a war against Communism that at that point it was not at all clear it would win. The authors do not demonize Ames but they do not have to: his deeds speak for themselves and the trail of bodies and shattered lives of those who resisted Communism in Russia shows us the work of conscientious (and sometimes, merely opportunistic) people who saw the power of that horror and fought back against it. A compelling narrative and a revelation of the depth and intensity of this point in history, Circle of Treason: A CIA Account of Traitor Aldrich Ames and the Men He Betrayed provides an inspiring and instructive reading experience.