The Cucking Of Gondor 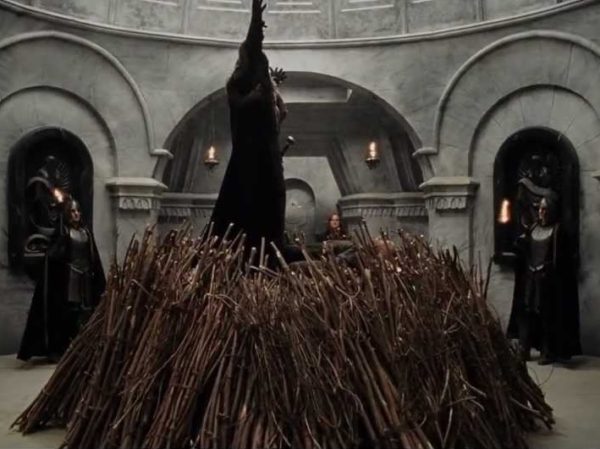 Watching The Return Of The King (Part III of the Lord Of The Rings Trilogy, which includes also The Fellowship Of The Ring and The Two Towers) again, a detail previously buried rose to the surface: the zombie-like and automatonesque behavior of the citizens of Gondor in the absence of a king.

Not surprisingly, the script — adapted not just from J.R.R. Tolkien’s trilogy but his other books, letters and public statements — gives some hints as to why. From a short speech by warrior-wizard Gandalf:

They guard it because they have hope. A faint and fading hope that one day a king will come and this city will be as it once was, before it fell into decay. The old wisdom borne out of the West was forsaken. Kings made tombs more splendid than the houses of the living and counted the omens of their descent dearer than the names of their sons. Childless lords sat in aged halls musing on pedantry, or in high cold towers asking questions of the stars. And so the people of Gondor fell into ruin. The line of kings failed. The white tree withered. The rule of Gondor was given over to lesser men.

Keep in mind that this comes from a series that could well be summarized as “Marginalized reactionaries battle domestic cucks and foreign immigrants to restore the monarchy and unite the race of (European) men.” Like the Old Testament, the Bhagavad-Gita and The Odyssey, this movie is about a race war.

Its spin on that story is that several races ally to defeat the mixed-race empire (orcs, goblins, and the new fusion Uruk-Hai) of Mordor, which suspiciously resembles a cross between the regimes of Genghis Khan, New York, the Bolsheviks and the Napoleon. Mordor has no goal except for power, and it seduces its warriors by promising them an end to the reign of man, and an age for the previously oppressed races.

In addition, because Tolkien is not a one-dimensional propagandist and therefore most likely belongs in the realm of literature despite his sometimes abysmally rambling scenes, the story is a meditation on the nature of ego. The ring allows the ego to rise above its position through its promise of pure power and the ability to hide past acts.

This aspect of the ring calls to mind another story from the classics, namely the tale from Plato of the ring of the Lydian Gyges which allows a bad man to hide his bad deeds and show off his good ones so he appears “good.” The ring is equality: a peasant can become a king with its magic, and by hiding his inner deficits that make him unfit to be a king.

Watching the people of Gondor, peasants and warriors alike, is mystifying. They move as if in a daze, not a dream, in which they are unable to respond to simple eventualities. For example, when the orcs attack and breach the first level, there are still civilians hanging around who have apparently failed to notice the gradual collapse of the door and other defenses. When the servants of the steward are helping Denethor get ready to incinerate his son, no one appears to notice or question was is going on.

Although this seems shocking, that is only because we cannot recognize it in ourselves. The way to succeed in this society is to follow whatever the people in charge say. If they want to burn their own sons, you had better help them if you want that promotion. Like Gondor, our society cannot conceive of its own demise, so while terrorists slip across our borders or rise up in our inner cities, we keep going to work and shopping the in first level, blithely oblivious and trusting in the inertia of the system.

In addition, the movie goes out of its way to make Denethor a crazed Leftist ruler. He is the author of the Boromir strategy which says that the way to defeat the enemy is to use its own technology — the ring — against it. He treats Pippin the hobbit as an ethnic pet, even (hilariously) asking him to sing, applying cultural relativism when Pippin objects that his people have no songs for great halls. “And why should your songs be unfit for my halls,” says Denethor, probably expecting Pippin to rap in Spanish. 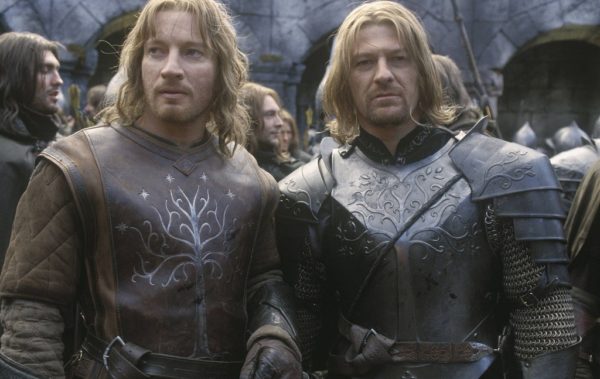 Other scenes haunt us. The soldiers of Gondor are mistakenly told by the mentally decaying Denethor to abandon their posts, and so they do, despite the enemy at the gates. Citizens have a dazed look as the counter-attack to recapture Osgiliath departs, seemingly both detached from what is going on and caught in a perpetual melancholy and self-centeredness. The group seems amazed when Boromir actually does something like repel orcs from its shores.

We live in the same state of solipsistic melancholy now. We expect nothing but failure from society so that we are never disappointed, and we mindlessly repeat the platitudes of our insane leaders because we know that if we do not, we will be fired from our jobs if not arrested for hate crimes. When they declare war, we go along, without a hope that things will go well.

This is what happens when bad leadership afflicts a nation, brought on — as Gandalf observes — by the passing of the old order into obsolescence. When there is no purpose to a society, kings become like everyone else fascinated by personal pursuits, which relate more to the ego than to successful, healthy, and quality-oriented results in reality. Then the insane and inept take over, and people adapt to that, then put their brains on hold in order to survive the inanity.

That shell-shocked look that afflicts the people of Gondor is visible among the people of the West today, as it was in Tolkien’s time. Modern society is miserable as a day-to-day experience. It is ugly, the leaders are crazy, the official lies are nonsensical, and people have become insatiable egotists living in worlds of their own, which makes daily life more like babysitting than civilization.

In addition, it is atomized. The family is dead, as is the extended community. Friendships and loves are split up as people flit about their lands in pursuit of careers, “education” that teaches in four years what a few months of independent study could do, and to escape the continual pattern of decay caused by diverse and anonymous cities.

Driving through most big cities, one sees the effects. Street signs are in a half-dozen languages. Communities are balkanized, with third world levels of crime, neglect, dirt and disorder. People drive erratically and act impulsively. There is zero trust, and the outside world seems hostile and incomprehensible.

As was the case in Gondor, this cannot stand. It will either right itself, collapse, or be replaced. The ideal situation is a combination of the first and third caused by a momentarily sane group gaining political power and whittling down or abolishing the previous states, then enacting a new strong leadership which is oriented toward sanity instead of zombie automaton equal obedience.