The Caucasian retroviral of “Breaking Bad” 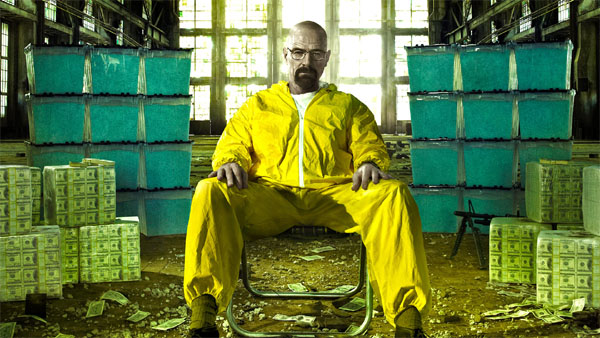 For those of us who long ago tossed out the trappings of modernity, including entertainment, television is experienced through the words of others. But don’t worry — they’ll tell you. Since we lack much in common at any level in the modern state, people have to find neutral topics of conversation and TV is high on the list.

As a result, television serves a role that is an inverse of the old line, “Don’t adjust your set.” Let your set adjust you, and tune you to the pulse of culture and the harmonies of contemporary thought, or hive-mind behavior, whichever comes first. Television is both an interactive poll and a propaganda device, made by elites to please the tastes of the masses and flatter their assumptions.

Hearing about “Breaking Bad” is inescapable, especially where mixed-generational conversation occurs. People were shocked by its brazen embrace of drug culture, but this isn’t Cheech and Chong being amusing with marijuana antics. This is gangland-style production and marketing of a deadly drug with deadly consequences for those who get in the way.

Brushing aside the show’s nods to the liberal sensitivities of Hollywood, especially its invocation of the tragedy of the lack of universal free (and thus lower quality, and thus more expensive by paperwork overload) health care, “Breaking Bad” created a cultural alchemy that will take us decades to process. It transformed our vision of white Americans.

For the past three centuries at least, artists have been constrained by majoritarian thinking. As presumed members of a majority, they are looking at the majority, and trying to find ways to mold it or express it. Since a majority has no idea what it is, since its daily cultural rituals are invisible to its consciousness, this requires using The Other as a counterweight.

Samuel Taylor Coleridge did this in “Xanadu,” a poem more subversive than people think since it landed in a time when the rapacious and senseless attacks of Mongol hordes were still a cultural memory. Opera did this as well, trotting in a procession of lusty gypsies, passionate Mediterraneans and mystical Jews, Orientals and occultists.

In the new world, we projected otherness into our labor castes. The archetype of the “Magical Negro” is well known and has been relied upon in different forms, from Mark Twain through contemporary art. This form of Otherness allowed us to have a voice outside the majority speak truth to the majority, because a member of the majority speaking truth faces “that’s just your opinion, man.”

The ugly secret of majorities is that because they are assumed to be permanent and static, there is no need to listen to any particular member of that majority, since they are a voice within and not a critic who sees the big picture. We assume that member is simply being critical, and not the bearer of new knowledge. Thus we look outside.

“Breaking Bad” thwarted this process by for once, manufacturing an Other inside of us. Suddenly you have normal people who have gone to the dark side. There isn’t a greater Satan for white people especially than meth, the drug which eats brains and rots faces, and turns normal people from the absurd mundane into monsters of crime and casual prostitution. An endless procession of pus-dripping zombies and deformed babies emerges from meth.

However, this television series glorifies — insofar as it can outside the moral filter — the production of this drug. Meth is power, because money is power, and a justification for violence such as desperation is also power. A dying progenitor, faced with a need few would question such as providing for his family, is desperate until he becomes warlike and aggressive. I am the danger.

If we had to summarize “Breaking Bad” in moral terms, the lesson would be that when your back is against the wall, you are dead until you decide to break the rules. To make that omelette and ignore the shattered eggs. When you stop being the passive recipient of society, and become a member who knows no rules, you have the power.

With this development, the Outsider is within. We like him because he’s one of us. We also like the way he has pushed back the petty and irritating bureaucracy and rule-based nature of modern life. There are no rules, when you have a mission like make meth to save your family. You can turn to the wimpy people with triplicate forms and rule books, hold out your shotgun and say, “Stop quoting laws — we carry weapons.”

As a member of the majority who is also an outsider, you no longer need to justify yourself. You have become something white people have yearned to be for years, and have seen only in the Other: black hip-hop, gypsy caravans, or the mysterious empires of the Orient. “Breaking Bad” revitalizes the vision of white people as dangerous, as outside the rules, and most of all, as powerful.

Like the gun-slinging rappers we see on MTV, “Breaking Bad” is outsiderness that shows us an alternative to the insufferable Nanny State society we have created. It doesn’t edge up on the rules, it shatters them. Even more, it is a Caucasian retroviral. It shatters the virus of weakness based on being obedient, going to jobs, and hating ourselves for being boring. It revitalizes our sense of purpose and potency.

While it’s a mistake to find any sort of profundity in entertainment, it does make sense to treat television like the conversation it produces at the water cooler: a dialogue about implications, and not the topic itself. Meth is bad, but breaking outside the mold of the wimpy white guy is good. From now on, we’re no longer white nerds; we are (potentially) the danger.

Why universal basic income signals the end of diversity | A fairytale