Look at a suburban neighborhood thirty or forty years ago, and you’d see some pleasant images: neighborhood kids policing their own imaginary worlds in kickball, fort-building, and other games; neighbors getting together for barbecues and maybe even block parties and pool parties; open garages and screen doors letting in fresh air and even glances from the neighbors.

Today, walk down that same street, and you’ll find the following:

Part of the isolation in our quiet, suburban lives is due to removing the idea of community in a place set up perfectly to let it foster. But what caused that to begin with?

The idea of privacy taken to an individualistic extreme is one cause. It’s fine to crave privacy when the blinds are drawn and the doors closed. But when this is the de facto standard for every house in most neighborhoods, it gives the neighborhood a sense of isolation.

That family who lives four houses down, and has a kid who will be in the same Kindergarten class as your little one? You saw them drive by twice this summer and waved and smiled, but that’s it. Their shades are always drawn; their garage always closed. 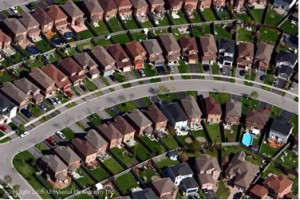 We have replaced natural socialization with some fake, randomized version in the same neighborhoods thirty years later. One reason is too many children of the original suburbanites grew up in homes that ended up broken after the move to the ‘burbs. They figure, something about their community must have been the cause, so the suburbs are bad – but if there’s nowhere else to go, the way things were done way back then must have been bad.

So let’s change things up – screw everyone else, we don’t need them! Paying a service to get together with other people so there’s no hard feelings if I don’t like them is easier; more like a consumer choice.

What isn’t mentioned is that the people who happen to be in office at the time gain more power through lack of feedback in the community. “Everyone wants to sit around and watch TV, and let us run the town for them? Sure, why not? No one is paying attention, so I’ll [insert corrupt act here].”

It follows through to the grandchildren of the original suburban transplants. Where kids learned from a very young age that if you were the youngest/smallest/weakest in the group, you’d be last picked for sports until you got bigger or stronger, now kids are forced to intermingle and behave even during what was once free time devoid of constant supervision.

This was the time kids were able to exercise imagination to its fullest. Thank the idea of equality for this – we can’t have kids policing themselves in any way, shape or form because some kids might be bullied; or worse, learn something about themselves they could (should) improve upon:

â€œOne of our goals is to help [bystanders] understand that even though theyâ€™re not active participants, just observing and the silence allows the bullying to continue,â€ Hall said in an interview. â€œOne of the main goals is to reach this group of individuals; if we can do that successfully, we stand a good change of reducing bullying.â€

In order to allow for better communication between staff members and to have a more integrated reporting system, Gormley said the school district would be purchasing software for online reporting.

First up: Software to report bullying. Next up: prosecute the offending bystanders!

It’s interesting that it took years of micromanaging the lives of children before we finally started talking about bullying. Some sharp words that get to the gut of the matter:

The result of forced, random socialization via a generation of faithless, selfish people born from an even more selfish group, is an unfortunate feeling of isolation in places that are supposed to be warm and welcoming.

There are exceptions.Â  In the same sense that not every suburb was a Leave It To Beaver paradise of sewing circles in the past, not every suburban street is a lonely place. But many have lost an important sense of identity, and when identity is lost, there are no cultural norms by which people adhere. So we shut ourselves in, and the house next door is just a point of comparison more than a place with welcome hosts and like-minded ideas.

The people have become soulless and empty, not the suburbs themselves.