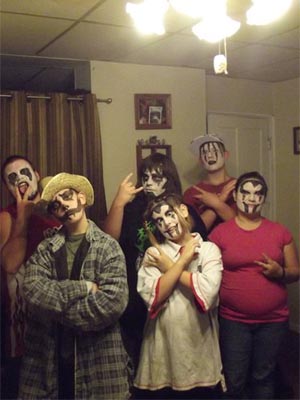 (Why) Everything is going to hell.

These days we have armies of â€œexpertsâ€ investigating the causes of our misbelonging. Of our unexpected freight and intangible unease. The face of yet another famous sociologist, media-specialist or psychologist is pulled on television, just to tell us where everything went wrong.

Except, theyâ€™re all wrong. Everyoneâ€™s wrong, they just donâ€™t get it â€“ they donâ€™t have a clue. These â€œold boysâ€ arenâ€™t our guides; they are forlorn travelers, blindly struggling around in an uncharted swamp. In the dark, blindfolded and with earphones on.

200 years ago, a peasantâ€™s son was born. His father taught him to use the plough, to milk the cow, to clean the stables and to plant and harvest crops. At night, the son of the peasant looked up to the sky and he knew the motions of planets to be eternal, he knew that he would one day marry their neighbourâ€™s daughter. He knew that his son would inherit the farm after he one day inherited it from his father. The world was older than he was, and the world would surely outlast him. He was finite and mortal, but the world around him was solid and imperishable. And, although he was poor, the peasantâ€™s son found cause for relief and quietude in that.

Today, our biological existence is longer than it takesÂ the world around us to change â€“ to die. Everything around us is in constant fluctuation. For all we know the world might look entirely different in 20 years. Whoâ€™s to say? Technology is on the rise, we live longer too. Nobody has a clue where things are going really. Except the Chinese, and even they donâ€™t.

The power of nation-states has evaporated and gone up in cyberspace. Decisions are being made at EU level, in the shareholder meetings of large corporations, and all of it has influence upon our lives. But we have lost our grip on it, and therefore we turn to smaller scale identities. Identities which give us the feeling of a solid ground beneath our feet, but our hands reach out to feebly scratch that which we cannot avert. We are stoked against one another as these identities draw us in -â€“ like the Flemish versus the Walloons, the Islamists versus theÂ Copts â€“- but meanwhile weâ€™re still walking around blindfolded and with earphones on.

At school parents are told their children suffer from ADD, autism and borderline â€“ disorders the peasantâ€™s son had never ever heard of â€“ but the bottom line is really this: In a system geared towards control and security, weâ€™ve lost control over our lives and have no clue how to get it back. Heck, for all we know tomorrow the Chinese are taking back Taiwan, Wallstreet goes bankrupt as the IMF falls, or Turkey declares war on Israel. We really have no clue.

At night we bar our shopping malls with automated gates, we close off our neighbourhoods with iron fences, we are made to pay higher prices for increasingly scantly insurances â€“ the whole world seems geared to take away from our precious sense of safety, by confronting us with our vulnerability. Meanwhile we gradually lose our freedoms and privacy too â€“ anything from mandatory public transportation cards that register your steps, to anonymous people randomly blocking your facebook account â€“ because you didnâ€™t put up enough useful personal data for them to extract.

It all proves my point over and over again â€“ we canâ€™t trust the old boys. We really canâ€™t; they made themselves rich by having the fresh generations pay for their pensions. They encouraged mass immigration in the name of universal tolerance â€“ so that they could have a cheaply mowed lawn and a shawarma shop in every street, and then they still weren’t satisfied so they built McDonaldses right next to them.Â They are the ones upholding the fiction of the â€˜open societyâ€™ â€“ telling us that weâ€™ll get there if only we work hard enough. But meanwhile theyâ€™re filling their pockets and preparing their exit. Theyâ€™re the ones who rolled into interesting jobs although being underqualified â€“ just because society and the public sector were expanding. Today me and you have to meet a quadrant of competences and to be â€œconnectedâ€. Theyâ€™re the ones who collected staples of entitlements â€“ but who will pay for our pensions?

The world is getting smaller as the scope of politics is getting bigger. What should we do? The answer, I know, is a return to community spirit, to a flourishing civil society with close communes which make us feel welcome, warm, and sheltered. Instead, today we feel left alone deep in our hearts, facing the world with abandonment in the back of our minds. But weâ€™re geared towards sociability since we live in cities, so we approach one another in an amiable manner, hiding our deeper selves, to then be on our way again.

The solution lies in a return to community spirit and genuine mutual care. Call it ‘Brotherhood’ if you will. But that will never happen â€“ why? The internet. Iâ€™ll give you an example (and as always my examples really happened):

Group of teenagers, aged 15-20 hangs out on skype after school andÂ during the weekends. Parents think itâ€™s fine because thereâ€™s nothing to do outside â€“ streets and pavementsÂ make way for the holy car, the vessel of our economic salvation, and junkies litter around their used needles. So these teens are playing games like runescape,Â minecraft and whatever. One of the friends asks another to read a short story he has written. The boy promises to read it.

Morale of this anecdote? He never bothered to read the story because he knew he could always block the guy if he kept on about it. Hours and days go into this interaction â€“ time that could be used to build trust between people, to build connection, commitment, and civil society. But instead all of it wasted time. Wasted social capital. And thatâ€™s the way people treat each other nowadays; as products to satisfy short-term interests. Same with dating: You can have sex a few times but if you want to expand the relationship to something bigger the woman quickly puts an end to it. â€œItâ€™s fun while it lasted,â€ they will say. This is why people are messed up nowadays and no psychology “expert” is going to help against it.

Because they don’t see the real targets they should aim for. They lack the vision, the clarity, to pinpoint the problem. Here at Amerika.org, we do seeÂ them.Â Because weÂ are the Voice of the Future, not of the “old boys”.

Whatâ€™s there left connecting us? To unify us? Our patriotism has dried up to drinking beer together in support of the national football team â€“ to watch corny televisions shows depicting base clown behaviour and then to discuss it at work. Weâ€™re too busy for our friends, weâ€™ve got our hands full with work â€“ but what do people really spend time on? Watching youtube movies, chatting in MSN, uploading myspace photos of their latest holiday. Itâ€™s the Truth and you all know it!

We are the last bastion of sanity â€“ offering you an honest oversight of the bigger picture. As I told Brett Stevens before I now say to you: I will not rest before an army of blimps blots out the sun, searing the sky with brightly beaming colours of amerika.org