Some clarity on racial crime statistics 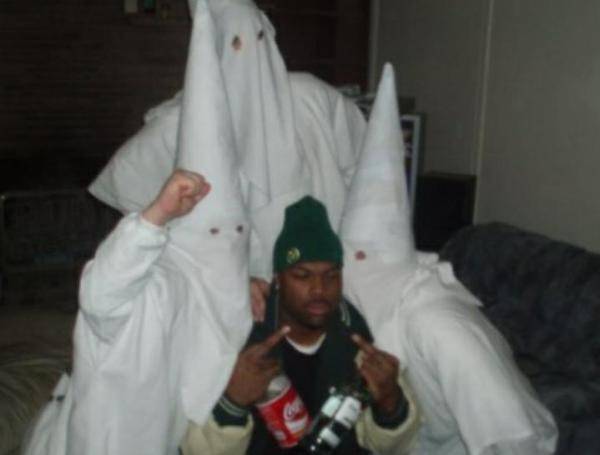 Our conservative media keeps trying to push past taboo barriers one inch at a time, knowing that if you get an inch and take another inch, you are in a more defensible position than if you had taken a mile.

Fox News — our mostly-RINO but sometimes conservative media as hybridized with a tabloid where everyone shouts all the time — broached the subject by publishing some now-widespread race/crime statistics:

The basic point here is the term disproportionate, in other words that African-Americans commit more crime per capita than whites, and that police kill fewer blacks despite this.

A wise philosopher once said, “There are no facts, only interpretations.” In this case, without understanding these numbers and what causes them, the statistics are nearly meaningless. But first, let us look at another form of what they are not.

The left immediately fired back a barrage of logical fallacies designed to confuse their audience long enough to get them into a Two Minutes Hate of the right again.

A leftist can tell ten lies in the time it takes to refute one because leftists are truth-agnostic. What matters is the ideology. If something affirms ideology, good; if not, ignore or destroy. The first confusion is this:

The first interesting thing is that when O’Reilly wants to talk about population proportions, he only does it in relation to the number of supposed “murders committed” by blacks against blacks, as if this was some kind of correlation or justification for when police kill blacks.

No, he never says that. He’s comparing proportionality of blacks (I’ll use DailyKos’ term for the group I identify as “African-Americans” here) shot by police to proportionality of crimes committed. His point is that cops are clearly not going out of their way to shoot black perps.

Are we arguing every person killed by police in the U.S. is only dead because he or she is a murderer?

No, he’s not. He’s comparing people shot to people murdered because both involve death.

More lies. Trayvon Martin wasn’t killed by police. The reasoning was not fear in each case, but imminent threat. Further, we do not measure killings by “just cause,” but by self-defense. In every case, the shooter felt under attack and feared losing control of the gun. This is why you do not attack people and take their guns unless you have nothing to lose (i.e. certain death).

You’ll note he offers no statistics on how many people are confronted by police versus those shot, or any breakdown by race. Weird omission.

As I’ve written before, claiming that 90 percent of black people kill black people (and actually it’s 92 percent) is completely and totally invalid since that number is only drawn from cases with a single victim and a single offender.

We’re comparing officer-involved shootings with one officer and one alleged perpetrator. That is why he uses these.

Instead of 92 percent of blacks being killed by blacks, the data we have for all homicides, including those with multiple victims and multiple offenders, who may be of various races, indicate that only 55 percent of the time is the first victim black when the oldest offender is also black. Forty percent of the time authorities don’t know who the offenders are.

He just admitted a 40% error rate. This is why no one uses these statistics. We have literally no idea who was involved in most of the cases, where of a group only some of the perpetrators were apprehended.

The fact is O’Reilly’s claim that blacks murders are committed by black killers 90 percent of the time and therefore police are somehow justified in targeting and killing blocs is just. plain. flat. out. bunk!

He’s not talking about justification; his point is that if cops were targeting blacks to kill, they would disproportionately kill them, where the opposite is true.

If you separate words with periods for emphasis, you’re a moron and/or you think your audience are morons. This is the worst linguistic trope ever and it was tired and dead in 2012.

If you look at the population proportion of the victims of police killings, the results are even more skewed than the rate of victims for other types of murders. 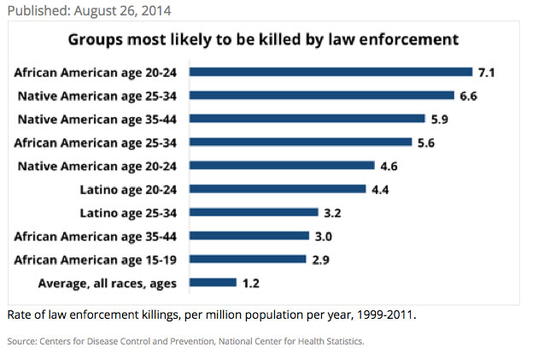 This nifty chart is designed to make the casual moron reader think, “See! The facts support it!”

In fact, it supports the other side. If a group is smaller, its members are “more likely” to be killed by police because each killing has a higher ratio of likelihood. If one house on a block of ten houses gets burgled, you have a 1-in-10 chance of getting robbed on that block; if there are two houses on that block, you have a 50% chance. His figures actually support the other side asserting that it does not disproportionately kill blacks, given the higher rate of black homicides, which are a shorthand way of measuring violent crime.

He backhands into this explanation:

Site keepers further explain that, if you ignore age groups, the group actually at the highest risk of being killed by police are actually Native Americans, mostly because the number is killings is so high in comparison to how small their total population is, while African-Americans come in second with a rate of being killed by cops that is twice their proportion in the population.

Twice their proportion in the population, whereas at 13% and committing over half of the murders, blacks are four times or so more likely to be encountering police in a violent crime situation. Still supporting the other side here.

It seems that nearly all minority groups are being killed by police at rates far higher than their proportions of the overall population. 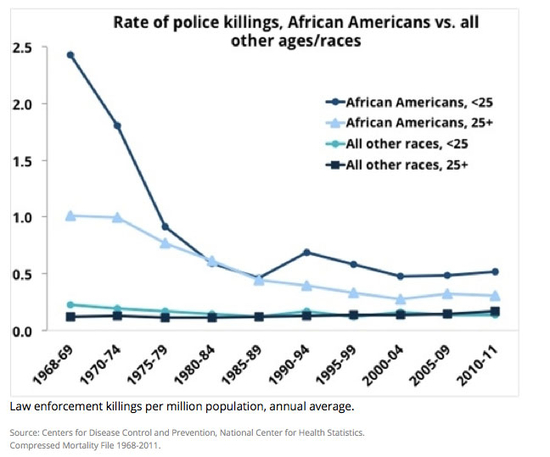 Yes, but not in proportion to the crimes they commit, which points to police handling them with kid gloves on the whole.

Add up the four names he mentions and you have a statistical insignificance in the face of this statistic.

One would think that African-Americans being at far higher risk for being killed generally would lead law enforcement to take pains to protect them fully and completelyâ€”not use this as a lame and non-factual excuse to justify having police do the killing instead of someone else.

This is just rhetoric; a pure talking point to rally the troops. The point is that the statistics suggest they indeed do that. A useful figure for comparison might be the mentally ill, who get shot a lot by cops as well, mainly because they keep doing crazy and violent stuff when they go off their meds.

He also says any protesters who fail to disband and disperse as soon as violence erupts are implicitly responsible as “aiders and abettors” of the violence.

If you were protesting for a new library, and suddenly the Klan showed up, would you stick around?

But that’s just par for the course in Wingnuttia, where they want to wave the flag of personal responsibility right after they’re done telling black people, who are largely the targets of violence and murder, that they are somehow responsible for those other people killing them, whether those others are cops or other black people.

That’s not what his facts say, but he wouldn’t let factual data stop him. He wants to build the case that cops are deliberately targeting black people when ignoring the higher rates of violent crime for minority groups versus whites and Asians.

I suggest anyone concerned with this topic take a traipse through Jared Taylor’s excellent The Color of Crime. The Daily Kos guy is either insane or stupid, or a manipulative liar; even money rides on the latter. 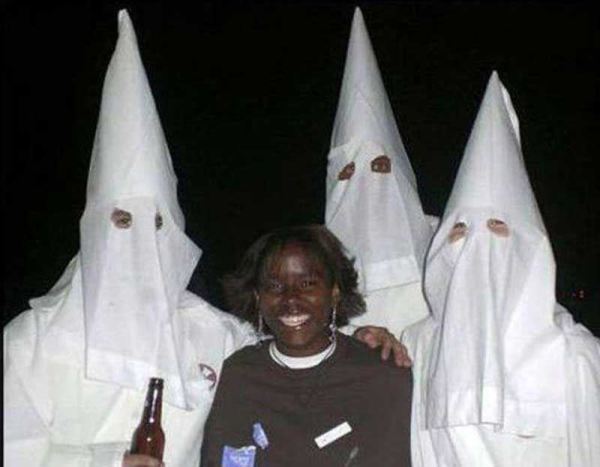 Next topic: why all of this is completely irrelevant.

America’s police have since the tumultuous 1960s tried to be easier on minority groups because of the excesses of that era, brought on for the most part by the complete unfamiliarity and intensity of the conflict. We had bombs, race riots and a sudden massive increase in violent crime jolting our cities. Things have calmed down since then.

Despite that, we still have problems. The answer can be found through a simple rhetorical question: what race of police officer would you like to be arresting you, if you were so unlucky as to find yourself in suspicious circumstances? Most people would prefer an officer like them, meaning not just in race, but class, and general outlook on the world.

This cuts to the core of the actual issue that no one is talking about. African-Americans will not feel truly human until they have self-rule and interact with their own for all the events of life. This is not saying that they dislike white people, but that people of all races prefer their own. When you have to receive the news about medical tests, ask for a home loan, talk to a lawyer, speak with a teacher or talk to a police officer, it helps a lot to have someone like you.

Even more important is having a sense of your own community. People ask why African-American crime statistics are so high, and tend to point to a certain IQ average and normal events in some parts of Africa. Maybe this is so, and maybe it is not. What overshadows it is the fact that until African-Americans live under African rule, they will always perceive themselves as outsiders and wonder if the system is treating them fairly, even when it is.

This is a fact known to all minority groups, all of whom seem to have more crime among them in a diverse society, including white people who are now a minority in large parts of America. Diversity itself makes us distrust each other and, when power is handed out, hate each other for having power over us. Diversity is a path to racism and hatred.

By “diversity,” I do not mean black people; I mean diversity itself, which is the policy of including different ethnic, cultural and religious groups in the same society. When the people in power have different identities from the population, resentment occurs and crime occurs at a higher rate than expected. The anger is real. African-Americans suffer under this system, but so do whites, and every other ethnic group. In my view, the cause of high minority crime is mostly this feeling of being a subjugated, captured people whose only place is as ceremonial victims to be pitied by the dominant culture.

To reverse this problem, and save us from having more Mike Browns and Trayvon Martins lying dead in our streets, the only solution is to un-do diversity. Give each group leadership over itself and its own identity. Ideally, give them reparations and send them back to lands where they are indigenous. But do not perpetuate diversity. To do so is to ask for more bloodshed, hatred and manipulation.

Legalize rape | The illusions on which conservatives rely