by Jonathan Peter Wilkinson on February 11, 2018 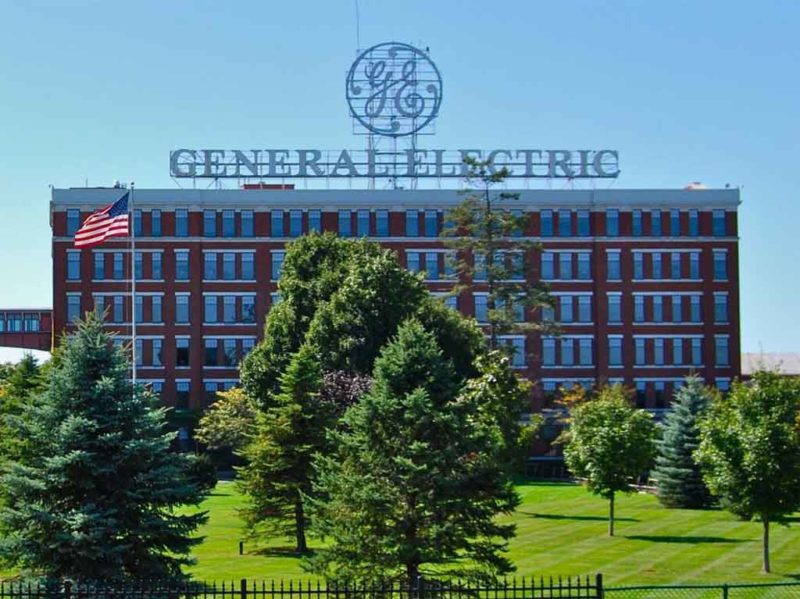 So way back in once-upon-a-time time there was this ruthlessly efficient, intellectually brilliant and immensely profitable corporation called General Electric. They saw the barriers holding back human progress and making our lives nasty, brutish and short. They saw opportunity and proceeded to go awesomely rip-ass on those limitations to human greatness.

Here are some of the truffles that these capitalist piggies dug up.

In the century following the Civil War, a handful of technologies revolutionized daily existence. The lightbulb extended the day, electric appliances eased domestic drudgery, and power stations made them all run. The jet engine collapsed distance, as, in other ways, did radio and television. X-ray machines allowed doctors to peer inside the body, vacuum tubes became the brains of early computers, and industrial plastics found their way into everything. All those technologies were either invented or commercialized by General Electric Co.

So GE banked good will, admiration, and aw, hell. They just flat-out raked in the clams! They were everything you would expect from a corporation personally co-founded by Thomas Alva Edison. Show ’em what they win, Dom pardo.

For most of its 126-year history, GE has exemplified the fecundity and might of corporate capitalism. It manufactured consumer products and industrial machinery, powered commercial airliners and nuclear submarines, produced radar altimeters and romantic comedies. It won Nobel Prizes and helped win world wars. And it did it all lucratively, rewarding investors through recessions, technological disruption, and the late 20th century collapse of American manufacturing.

Like any great institution in Amerika, GE was a ripe target for social convergence. It could not be allowed to exist as a counterexample to the narrative. It could not build an edifice competitive athwart The Cathedral. Most of this occurred under the malign stewardship of recently deposed CEO, Jeffrey Immelt.

The shift accelerates GEâ€™s leadership transition as Flannery, under pressure from activist shareholder Trian Fund Management, seeks to reverse this yearâ€™s biggest stock drop on the Dow Jones Industrial Average. Under the new boss, GE has said it will sell its fleet of corporate jets and unload its industrial-products operation to ABB Ltd. Flannery is expected to outline his plans for GEâ€™s portfolio of businesses next month.

And why was Immelt unceremoniously shown the way to a safe, fun-filled retirement? The battle damage assessment follows below.

The company had to be bailed out in 2008 by the federal government and Warren Buffett, and across the 16-year tenure of recently departed Chief Executive Officer Jeffrey Immelt its stock was the worst performer in the Dow Jones industrial average.

So how did this happen to such a great industrial titan of capitalism and the American Way? Well, they turned Amerikan instead of American. Under Immelt, they went from being a leading contractor in the military-industrial complex to essentially colluding with political leadership to the extent that they really worked more for the government than for any base of private sector customers. They are now so divorced from the actual market where American consumers buy things that they’ve recently sold off their lightbulb division to China. They have predictably found it hard to do business in America when they no longer sell things to actual Americans.

At first, GE survived its transition from capitalism to corporate fascism fairly well. They could shut down plants, fire American work forces and stop inventing anything that DoD didn’t bankroll the R&D on by making up the difference via financialization. GE Finance and Capitol more than made up the difference. Between 1981 to 2001 GE used tax loop-holes to arbitrage between lower US rental rates on capital and then build its facilities in coutries with much lower corporate tax rates than the United States. GE grew from a $14Bn company in 1981 to a $400Bn in 2001.

But then in the 2000s, The Visigoth Holiday in the capital markets ran out of beer. Idiot executive Jeffrey Immelt decided GE could make up the difference by buying up an entertainment conglomerate, fly-by-night financial firms and as much of the medical technology market as he could lay hands on. The latter two sets of acquisitions came to figure in GE’s current dilapidation and Detroiting.

In 2008, the financial acquisitions turned into fit that hit the shan. GE underperformed its estimates by $700Bn. When the capital markets temporarily froze, Immelt was forced to go hat-in-hand to the rest of Wall Street. Warren Buffett decided the company still had enough capital assets to be worth buying into and personally bought a $3Bn share. This proped things up enough for Immelt to live to be stupid on another day.

Then came Obamacare and GE’s involvement in the medical technology business made them a prime player. Like most prime players under Barack Obama, GE and Immelt were sold a bill of fascist goods. As the head of President Obama’s Council on Jobs and Competitiveness, Immelt thought he would always have the inside information on what Barack Obama would allow capitalists to still build.

In particular, GE is a major player in several industries that President Obama has been promoting as part of his administrationâ€™s cocksure embrace of industrial policy. With over $100 billion in direct subsidies and tax credits already devoted to green technology, President Obama is convinced that America’s economic future depends on the ability of U.S. firms to compete and succeed in the solar panel, wind harnessing, and battery and other energy storage technologies. Concerning those industries, the president said: “Countries like China are moving even faster… I’m not going to settle for a situation where the United States comes in second place or third place or fourth place in what will be the most important economic engine of the future.”

By 2014, GE had to admit rather sheepishly that progressive neo-fascist corporate subinfuedation to government wasn’t helping the good old bottom line. Here’s what Obamacare did for GE‘s then-dwindling portion of America’s industrial base.

Asked at the meeting about Obamacareâ€™s impact on the companyâ€™s earnings, Immelt responded, â€œI think thereâ€™s still a lot of uncertainty in health care and weâ€™ll just have to see that over time.â€ The companyâ€™s health care unit, which produces medical and biopharmaceutical technologies and which grew in 2013, showed losses in revenues, segment profits, margins and orders in the first quarter of 2014. The Daily Caller has reported extensively on Obamacareâ€™s damage to the medical device and technology industry. By February, the health-care law had already cost 33,000 jobs in the industry and 132,000 more were expected, according to a report from an industry trade group.

Just how much did Immelt personally invest himself and his corporation in The Democratic Party’s version of HitLARPing? He describes what being Amerika’s version of Hugo Boss meant to him in a letter to GE shareholders.

[W]e are going through more than a cycle. The global economy, and capitalism, will be ‘reset’ in several important ways. The interaction between government and business will change forever. In a reset economy, the government will be a regulator; and also an industry policy champion, a financier, and a key partner.

It obviously didn’t work. It never works. It never will work. Socialism only leads to death. In the case of GE, it will end up in a sort of twilight un-death. Nobody with an investing brain will look favorably upon GE when they evaluate near to mid-term fundamentals. They will keep getting hammered with downgrades. But they will never quite die. To quote an old Eagles lyric, “they stab it with their steely knives but they just can’t kill the beast.”

Like an the Russian oligarchs after the collapse of the CCCP they still hold assets that are too vital to liquidate or disperse without great upheaval. Almost every helicopter the US Army flies carries a GE engine. Most of the commercial jets in US Civil Aviation fleets are similarly equipped. Outside of Turbomecca de Espana, and absent the workforce at GE, most of the jet engine industry would end up where GE’s lightbulb patents now reside: China.

So GE drags along as a corporation. Similar to how post-communist Russia dragged along until Putin set about cleaning up the wreckage. It is still a viable asset play for investors who want to buy a steak when the price per share collapses below the book value of GE’s capital assets. Warren Buffett or Elon Musk can always use an empty MRI factory for something. GE will thus maintain a coma-victim’s pulse in the capital markets. So maybe Socialism won’t completely lead to GE’s death, but it has certainly brought about this once great corporation’s senescence. Perhaps its mighty and famous founder, Thomas Edison, now spins rapidly in his grave.