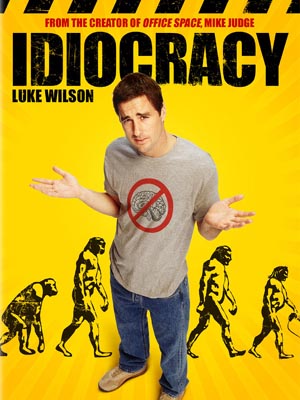 When we are underconfident, we desire to be accepted unconditionally. That way no matter how much goes wrong and how little we accomplish, we are still guaranteed a place in society.

Those who are so damaged in confidence and self-esteem that they assume they will never get anything right, and never accomplish anything of note, demand not only a place in society, but one equal to those who get things right and accomplish things.

Although a defensive outlook, this viewpoint is projected forward as a pre-emptive strike on feelings of inadequacy, regret and doubt.

When enough people gather who have this viewpoint, we create a society where social factors — being nice, novelty of approach, possessions owned, ironic or unusual lifestyles — become more important than ability.

If you want to know how the path to Idiocracy is paved, this is it. Natural selection now favors the social, not the competent, and so society breeds future generations of incompetent (but very sociable) people.

Dozens of studies have found that top performers – whether in maths, music or whatever – learn no faster than those who reach lower levels of attainment – hour after hour, they improve at almost identical rates.

The difference is simply that high achievers practise for more hours. Further research has shown that when students seem to possess a particular gift, it is often because they have been given extra tuition at home by their parents.

This is not to deny that some kids start out better than others – it is merely to suggest that the starting point we have in life is not particularly relevant. – BBC

Notice the sleight-of-hand — they allege all people improve at the same rates. That conveniently side-steps the knowledge that if someone starts out with a radical talent, they don’t need to improve that much; someone without the same talent can improve a great deal, and still not be as great. That is why many composers who laborer longer than Mozart had less stunning results.

Now, for the grim reality:

According to a new report, 47 percent of Detroiters are â€functionally illiterate.â€ The alarming new statistics were released by the Detroit Regional Workforce Fund on Wednesday.

â€œNot able to fill out basic forms, for getting a job â€” those types of basic everyday (things). Reading a prescription; whatâ€™s on the bottle, how many you should takeâ€¦ just your basic everyday tasks,â€ she said.

Some of the Detroit suburbs also have high numbers of functionally illiterate: 34 percent in Pontiac and 24 percent in Southfield. – CBS

Either we insist that everyone is equal, and then in effect call the above people lazy, or we admit that abilities differ and recognize that the people in the article above may have had an ability deficit. (Note: the mention of Detroit suburbs is a coded notice that this condition afflicts more than one ethnic group.)

When we insist on political equality, we open a can of worms. It follows this way:

It’s a deadly little mental loop. It bonds the individual irrevocably to the notion of equality, as they base their self-esteem upon not being incompetent by reason of equality. It also provokes the population to be in permanent seek-and-destroy mode for anyone who does not insist that equality is proven scientific fact.

But every day, our common sense slaps us in the face with how illusory this is:

Liberals love to blame poor Black and Hispanic performance in American public schools on the lack of school quality, e.g. lack of updated textbooks, no laptops for kids, etc. This has been the standard liberal narrative for decades (Iâ€™m an SF liberal myself, btw). But does this assessment match the data? Does it match what students and teachers see every day in American schools? Does it match what we see in society?

No. If either of the following statements were true, Asian and Indian kids would be performing poorly in American public schools as well:

But Asian and Indian kids are academically dominating. These students arenâ€™t just outperforming Blacks and Hispanics in the same exact schools, theyâ€™re also outperforming White students. Why is that? How are Asians and Indians doing so well in an academic environment thatâ€™s supposedly hard to thrive in?

The answer is culture. Some cultures are conducive to academic performance, and others are not. Quite simply, the problem isnâ€™t poor schools, the problem is poor parenting.

One fallback defense against this is often that of socio-economic status, e.g. â€œWell, this is simply because these high-performing Asians come from rich families, and the Hispanic kids are poorâ€¦â€ But this doesnâ€™t stand up under scrutiny. Hereâ€™s a clip from an article in the L.A. Times on this very subject, titled â€œTrying to Bridge the Grade Divideâ€.

To begin with, the eight students agreed on a few generalities: Latino and Asian students came mostly from poor and working-class families.

According to a study of census data, 84% of the Asian and Latino families in the neighborhoods around Lincoln High have median annual household incomes below $50,000. And yet the Science Bowl team is 90% Asian, as is the Academic Decathlon team.

I find it highly ironic that liberals claim to be the ones interested in protecting minorities, yet they are the ones championing this horribly destructive narrative of â€œbias against non-whitesâ€ in the academic environment. Most Indians are pretty dark, and yet they graduate high school, attain bachelors degrees, and graduate degrees at higher rates than Blacks, Hispanics, and Whites. – Daniel Miessler

Dialing back the ethnic rhetoric here, let’s look at this by individuals: some succeed where others fail. We all agree on those facts.

In fact, some succeed despite being less wealthy than others, where others fail.

If the difference is not oppression, and it’s not money, and some are able to succeed, that means success is possible — and suggests that the difference between success and failure is native ability.

That idea remains taboo in the society of equality and liberal democracy.

That taboo will continue our passage into mediocrity (in the sense of Idiocracy).

Even worse, it migrates upward — a tendency called prole drift — from the lowest to the highest classes. As a result, we have replaced our elites with sociable incompetents; hipsters, basically.

You can see a paragon of the Composure Class having an al-fresco lunch at some bistro in Aspen or Jackson Hole. Heâ€™s just back from China and stopping by for a corporate board meeting on his way to a five-hundred-mile bike-a-thon to support the fight against lactose intolerance. He is asexually handsome, with a little less body fat than Michelangeloâ€™s David. As he crosses his legs, you observe that they are immeasurably long and slender. He doesnâ€™t really have thighs. Each leg is just one elegant calf on top of another. His voice is so calm and measured that he makes Barack Obama sound like Sam Kinison. He met his wife at the Clinton Global Initiative, where they happened to be wearing the same Doctors Without Borders support bracelets. They are a wonderfully matched pair; the only tension between them involves their workout routines. For some reason, todayâ€™s high-status men do a lot of running and biking and so only really work on the muscles in the lower half of their bodies. High-status women, on the other hand, pay ferocious attention to their torsos, biceps, and forearms so they can wear sleeveless dresses all summer and crush rocks with their bare hands.

A few times a year, members of this class head to a mountain resort, carrying only a Council on Foreign Relations tote bag (when you have your own plane, you donâ€™t need luggage that actually closes). Once there, they play with hundred-and-sixty-pound dogs, for it has become fashionable to have canines a third as tall as the height of your ceilings. They will reflect on the genetic miracle they have achieved. (Their grandmothers looked like Gertrude Stein, but their granddaughters look like Uma Thurman.) In the evenings, they will traipse through resort-community pedestrian malls licking interesting gelatos, while passersby burst into spontaneous applause.

Occasionally, you meet a young, rising member of this class at the gelato store, as he hovers indecisively over the cloudberry and ginger-pomegranate selections, and you notice that his superhuman equilibrium is marred by an anxiety. Many members of this class, like many Americans generally, have a vague sense that their lives have been distorted by a giant cultural bias. They live in a society that prizes the development of career skills but is inarticulate when it comes to the things that matter most. – The New Yorker

Our society was once in the hands of realistic elites; but they are gone.

Our society once functioned as a type of pyramid, squeezing the best to the top; we have changed that.

Our society once valued competence and initiative, but now, it values buying the right objects and saying the right flattering homilies.

In the process, we throw our standards out the window and by not prizing competence, find ourselves valuing incompetence over competence.

But those incompetents will be very pleasant, sociable people.

The art of violence | All the cool kids