Should Anyone Cry For Dead Venezuelans? 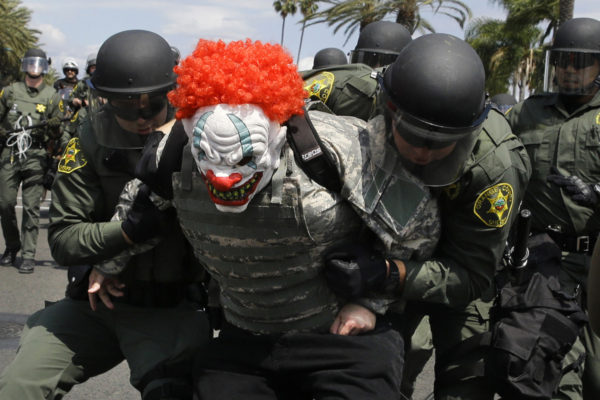 I was brought up in a graceless, unsaved state of pathetically Churchian Christianity. I ignorantly and self-righteously choose to hate Charles Darwin with a crimson and ineluctable passion. I’d see those smug, arrogant fvcks with their Darwin Turtle bumper stickers and was actually stupid and immature enough to let these internet trolls of the highway make me angry. As time has allowed me to learn more, I have learned several things.

1) God allowed us free will. This in turn allows us to royally fvck things up. Eden, therefore needs a garbage truck driver. Evolution is how the almighty disposes of low-power users of Free Will. The losers of the real-world version of Dumb Ways To Die have to be picked up and hauled away like the trash I put out on the corner every Wednesday morning. If Chuckles Darwin appears ugly, it’s because he’s the guy stuck driving the truck, so to speak…

2) In nature, this happens via the surgical strike. Wolves are made to look ugly, and they may scare the kiddoes. But if a rabbit is ever too stupid or too undisciplined to hang close with slower members of its kind, that rabbit very rapidly ceases to burden the carrying capacity of Blessed Gaea for long.

Human acne is not so easy to pop in front of the mirror. We practice charity and regard others of our kind in a non-solipsistic fashion. At times we even exhibit a certain frustratingly likeable nobility that sabotages the wise plans of the universal Gnon. Paradoxically; it seems like some of our best and most endearing traits make us a problem for any environment in which we so boldly intrude.

3) The Divine Revelation proposed four methodologies to remove unfit humans and poor some badly needed chlorine into the human gene pool. War, Famine, Pestilence and Death. When coached by the corrupt, immoral politician known as The Antichrist, they were quite the polo side when they chose to get out the ponies and go for a trot. Yet, as man evolved and came to more thoroughly dominate the Earth; these guys couldn’t keep up. We needed something new. Something far beyond mere sympathy for the devil, if the human race was to be kept in proper natural balance.

4) That something new had to be lethal beyond mere small pox or the bubonic plague. That new slayer and harvester of man came stealthily. It came cloaked in fair garments, rather than decked out in the visceral gore worthy of a grim, tyrannical reaper. It took all that was fair and noble about The Modernist Era and turned it into a poisonous iniquity. Pathological Altruism took decent regard for others, crossbred it with greed, envy and jealousy and thereby weaponized it into the vicious sarcoma of political leftism. Liberalism, yea verily, is the Fifth Horseman of a coming apocalypse.

5) The business end of this killing machine is Socialism. The latest killing field of pathological altruism where the unfit and solipsistic are reaped as the barley, is Venezuela. The Gnu Yawk Times tells us what happens to idiots who take the views of its editorial page as anything other than a satirical joke below.

Hospital wards have become crucibles where the forces tearing Venezuela apart have converged. Gloves and soap have vanished from some hospitals. Often, cancer medicines are found only on the black market. There is so little electricity that the government works only two days a week to save what energy is left. At the University of the Andes Hospital in the mountain city of MÃ©rida, there was not enough water to wash blood from the operating table. Doctors preparing for surgery cleaned their hands with bottles of seltzer water. â€œIt is like something from the 19th century,â€ said Dr. Christian Pino, a surgeon at the hospital.

Come to think of it Dr. Pino, it is something out of the 19th Century. That something is Socialism. Your life sucks and will probably end soon because Socialism sucks too. Perhaps it’s enough to make a decent man shed a tear. Even Jesus famously wept. Indeed he did; but only in the shortest verse of the Bible.

Venezualens liked Hugo Chavez. The begrudgingly voted for his hand-picked assistant butcher Mr. Maduro who claims that Venezuela’s health care system is 2nd only to CUba’s in quality outcomes. And besides, it’s all the US’s fault for drilling our own energy rather than buying his.

Of course Mr. Maduro is full of crap. Of course, Venezuelans are now getting around to being very sorry they voted for him. Your typical drunk driver who mows down a little kid on her tricycle feels similar regrets. In the case of the drunkard; that will typically cut no more ice than a plastic knife.

Perhaps in the case of the typical, solipsistic Venezuelan voter, their regrets and pathetic scenes of starvation should evoke no pity either. They voted for it. Show ’em what they win, Dom Pardo!

As a younger man, I was issued some give-a-fvck. I walked down range for two or so decades and cooked that sh!t off. I now sincerely believe anyone that votes for a liberal plays a stupid game and should win a few stupid prizes. Let’s see how Obamacare handles next Summer’s crop of Zika mosquitoes. If only political leftism had no negative externalities for those not stupid enough to embrace it.

So, in the end we do have to fight these Leftists. It is not sufficient to protect ourselves if we just shrug it off as a bunch of demotist idiots who kept on asking for it until they got it good and hard. We must somehow destroy the atavistic impulse to socialism. We must decry and loudly cry for the vile results. Unlike Palm Sunday, the stones will not cry out for us. So shed that tear for the Venezuelan. Socialism the Red Saracin forever will march upon your motte-and-bailey. Cuthulu forever, will swim to the Left. If you don’t cry for Venezuala, who will remain to shed any tears for you tomorrow?