I remixed this story excerpt — re-ordering the paragraphs to de-obfuscate the story:

Prescribed burns are intended to protect homes and lives by eliminating fuel that can cause explosive wildfires. The wildfire that has blackened 140,000 acres â€” or nearly 219 square miles â€” in the forest over the past week has been fed by the kind of tinder-dry vegetation that prescribed burns are designed to safely devour.

Obtaining the necessary permits is a complicated process, and such efforts often draw protests from environmentalists.

Biologist Ileene Anderson with the Center for Biological Diversity, an environmental organization, said burn permits should be difficult to get because of the potential damage to air quality.

The agency said it granted six permits sought by the Forest Service to conduct prescribed burns on 1,748 acres in the forest this year. The agency reviews such requests to ensure air quality in the often-smoggy Los Angeles area will not be worsened by smoke from intentional fires.

But records show only 12.8 acres burned.

There is always conflict between the short-term and the long-term.

In the short-term, solutions to long-term problems are inconvenient.

But if not addressed, those short-term blow-offs manifest themselves in real disasters, in the long term. But it’s unpopular to be inconvenient, so we keep repeating the same dumb mistakes.

As long as we govern ourselves by what is popular, and not what needs to be done in the long-term, we’re going to repeat those same dumb mistakes. A king can do an unpopular but necessary thing and get away with it, but an elected official cannot, which is why none do. 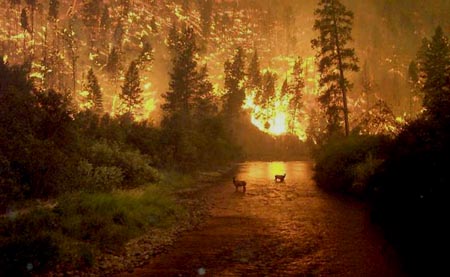 I’m sure the environmentalists made a dummheit here, but they were almost assuredly not the only ones. The chamber of commerce, civic groups, local merchants… who isn’t going to complain about more smog? Yet you still have to do what you need to do, or those blown-off short-term problems pile up and make for a heck of a big one.

Here’s another form of the same dilemma:

Burk was a bright, bookish 17-year-old, whose future was ahead of her.

Samuel, 50, had been in and out of prisons for decades. He was a transient with a long record of criminal activities and drug abuse.

By dusk, Burk was dead, her body left in her car in a downtown parking lot — her head beaten and her neck slashed, according to Los Angeles police and other law enforcement officials. Samuel killed her, police suspect, during a botched robbery. He was arrested within 90 minutes of her death on an unrelated charge and was held in custody.

In July 1987, Samuel was sentenced to six years in prison for robbing a residence in San Bernardino County, according to the California Department of Corrections. In the years that followed, Samuel was paroled several times and repeatedly returned to prison when he committed other crimes or otherwise violated the terms of his release, records show.

Another selective and revealing excerpt: this guy has been committing crimes impulsively for two decades. He cannot seem to stop himself. Like most criminals, he is addicted to excessive unnecessary pleasures. Like most predators, he is a criminal opportunist who cannot seem to think a step beyond his own actions.

And we kept arresting him, and letting him out. We didn’t want to deal with the actual problem: this man cannot be part of our society. He is uncivilized and will do nothing but destroy.

We could have taken care of that problem a long time ago… but we have to wait until he kills someone. Otherwise, we might be “oppressing” him, and in the short-term, that’s inconvenient because no one wants to be oppressed.

Yet a smidgen of “oppression” could prevent boatloads of victimization, in which good people are destroyed. And we all think our society is mostly morons, so we all know we need more good people, right?

Whether it’s burning underbrush or exiling sociopaths, our society fails at dealing with long-term problems because avoiding short-term inconvenience is more popular. We can always postpone our dealing with the problem and figure it’ll go away. And then it arrives, and we’re surprised, because we were in denial.