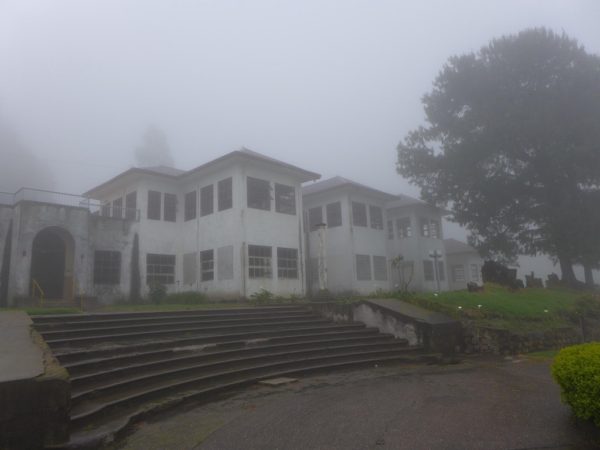 Whenever a large group of people seems to enjoy talking about something, back yourself up and stop to think: it is a lie. Whatever the Crowd likes is always a lie, usually a paired distraction from the real problem and scapegoating of an easier target so we can beat up wimps and feel like we have done something epic.

But it is always a lie because the Crowd always chooses based on what is mentally convenient for individuals in groups, not for someone who cares about the results of his actions and therefore needs a realistic read on the world. That person, the lone “individualist,” is in fact not an individualist but a unitivist, or someone who has bonded with his world by beating down his own solipsism.

Human perception is usually defined by psychological need, not realistic adaptation. In the way of nature, a few adapt while the rest live in illusion, and over time, the adapted gradually predominate over the rest. Human civilization reverses this, of course, because the rest have more votes than the adapted.

We refer to people engaging in fantasy-as-reality behavior as LARPing, autism or sperging but in reality, it is just a nerdy version of what humanity normally does. In the ghetto, everyone is an undiscovered star; in the third world, everyone is a king; in modern America, each person is a precious snowflake. This psychology is more consistent among humans than varied.

The biggest LARP these days is talk about “The Collapse” or the coming apocalypse. The delusional people come in several flavors: some think it will be climate change, others economic collapse, still others WWIII, and the really crazy think that the Rapture will come and Satan will rule this world while the righteous get beamed to the moon for free french fries. None of these are wholly wrong, but they are minimally right, meaning that they are ingredients not end products.

For example: Climate change is the effect of too many people and too much concrete displacing our forests, which is why the usual idiots are raving on about automobiles instead of looking at the actual problem; economic collapse is the result of a circular Ponzi scheme made by our liberal leaders to keep demand-side economics afloat; WWIII will happen when multiple bankrupt nations look at each other and realize war is the only way that their presidents get to stay in power; the truth of Satan ruling this world is that people are liars and the Lord of Lies wins whenever they are not oppressed by the small minority who are not habitually dishonest to themselves and others.

In contrast to all of these Hollywood fantasies, we have a pretty good idea of what collapse looks like, because it has happened many times before. In fact, collapse is the destination to which 99% of societies go, with a lucky 1% escaping for longer than a few hundred years, mainly because humans are pathological reality-deniers and reality denial destroys societies. It is not difficult to make an enduring society once one accepts that what most people “think” is true and “intend” is in fact the usual brew of impulse control problems, disguised cleverly.

When a society collapses, it just begins to fade away. Social organizations stop being effective but retain their power, which enables them to extract money from the population like cops taking bribes. People get stupider because the intelligent, tasking with keeping the herd in hand, have become exhausted and died out from too much babysitting of idiot monkeys. Soon, disorder becomes the norm, and the true nature of humanity comes out: individualists doing whatever they want and ignoring the consequences so they have more time to feel powerful inside their minds.

At that point, a former first-world societies resembles any of the majority of third-world societies that make up human civilization. People will live on little, have no future, and produce nothing lasting. Instead they will simply exist, in a timeless fashion that demands almost nothing from the individual and so is popular, with the trade-off that nothing can be done because nothing really works. 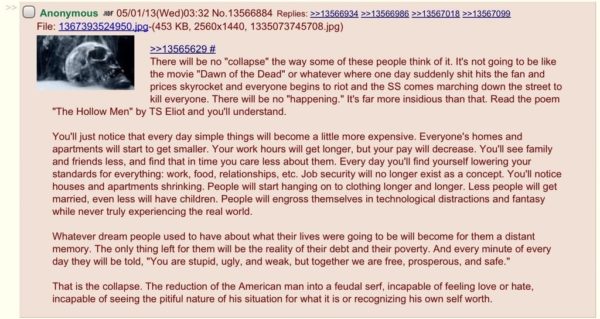 A few wealthy mostly-whites will rule over a vast horde of Caucasian-Asian-African hybrids. Mindless tedium will become the norm, and idiots will rule because the voters will have an average IQ in the high 80s or low 90s and be completely incapable of making even moderately complex decisions. The SHFT is LARP. Instead, it is a long slow decline into irrelevance.