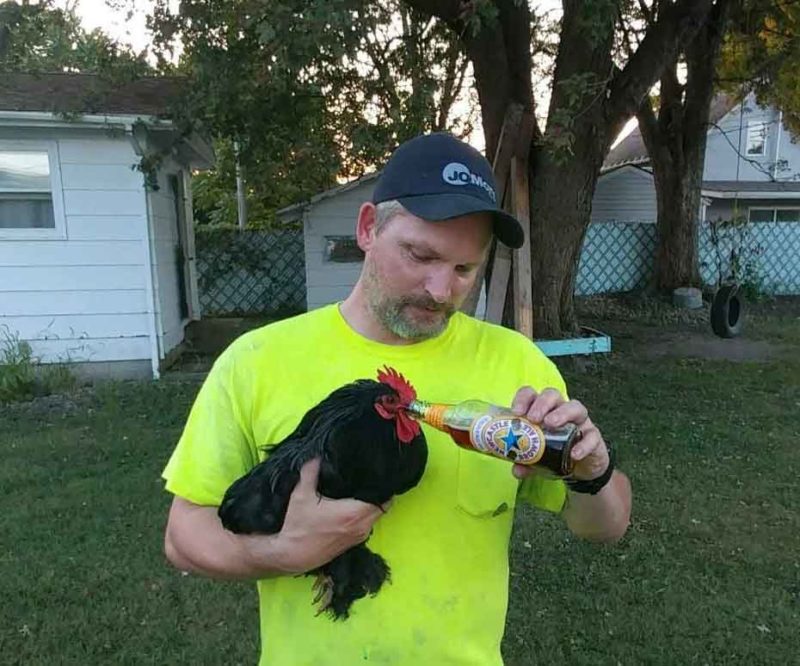 Very often, the drama of individualists versus realists in our society plays out through dueling narratives in the media, science, and academia. One of the changes in America that vaulted Donald J. Trump into power was the opioid epidemic, which many saw as a symptom of American hopelessness.

Enter the Leftists to try to disabuse that notion by introducing the dueling narrative that supply, not misery, was the causative factor:

What he found sheds new light on what has been characterized in the media as a mostly economic problem â€“ so-called “deaths of despair,” driven by economic downturns in certain parts of the country like the Rust Belt or Appalachia.

Ruhm, a professor of public policy and economics in UVA’s Frank Batten School of Leadership and Public Policy, tracked fatal overdoses at the county level across the country and compared those rates with economic factors like labor market conditions, income levels, housing prices and international trade exposure in each county.

His research â€“ currently a working paper â€“ concludes that economic conditions account for less than 10 percent of drug-related fatalities, which have increased by more than 210 percent from 1999 to 2015.

…Though economic conditions are certainly important for overall quality of life, Ruhm found that changes in the drug environment â€“ the availability and cost of legal and illegal drugs â€“ are the primary drivers of the opioid epidemic.

There is nothing wrong with his research; his conclusions based on that research are flawed. That is, he successfully tracks increasing availability of different forms of opioid drugs, and then assumes that this is cause and not effect of, for example, demand.

To an economist, however, this scenario looks like a classic case of demanding creating increase in supply, including through alternatives. Ruhm points out that consumers of opioids used medical sources when possible, and illegal ones when medical sources were less easily achieved. Opiate users have done this since the dawn of time. The point is that demand has been increasing.

Amazingly, the entire article is designed to conceal exactly that fact. It makes a token good point, which is that our rush for socialized medicine made it easier to get opioids from medical sources, but if interpreted correctly, we see that as people switching from illegal sources to quasi-legal ones because the latter became cheaper and easier to acquire.

Even more, we find ourselves having to ask why a large number of people are using these heavy drugs in the first place? We understand why people in extreme pain would use them, or people simply pained by their lives, but this is generally a small group of people. Instead, we are seeing normal middle class people using opioids as a lifestyle addition.

Maybe we should stop focusing on opioids alone, and broaden our category to all intoxicants. What do we see there? An increase in usage across the board.

It seems that people are taking a lot of drugs:

The Substance Abuse and Mental Health Services Administration (SAMHSA) surveyed 70,000 Americans aged 12 and older about their drug use during 2012. They found increased rates of marijuana and heroin use over past surveys.

“These statistics represent real people, families and communities dealing with the devastating consequences of abuse and addiction,” SAMHSA administrator Pamela S. Hyde said in a statement. “We must strive to prevent further abuse and provide the hope of treatment and recovery to all people needing help.”

Marijuana continued its run of being the most commonly used illicit drug, according to SAMHSA, with 7.3 percent of Americans over 12 reported using pot last year. That’s up 7 percent from the 2011 survey and 5.8 percent in 2007.

This was part of a broader worldwide trend of people taking more drugs:

Global illegal drug use is expected to rise by 25% over the next few decades as rapid urbanization, industrialization, and population growth in developing countries fuel the demand for illegal substances, the UNâ€™s anti-drug agency said in its new annual report this week.

…Drug use is linked to urbanization. With the urban population of developing countries expected to double between 2011 and 2050, they will see a marked increase in the demand for drugs.

Cities are in fact long known to bring problems because in their anonymity, they allow people to both pursue and idealize luxuries as a means of distracting from the otherwise disconnected, atomized lifestyle they provide. As Plato has his characters tell us in The Republic, cities produce a pretentious way of life:

I suspect that many will not be satisfied with the simpler way of way They will be for adding sofas, and tables, and other furniture; also dainties, and perfumes, and incense, and courtesans, and cakes, all these not of one sort only, but in every variety; we must go beyond the necessaries of which I was at first speaking, such as houses, and clothes, and shoes: the arts of the painter and the embroiderer will have to be set in motion, and gold and ivory and all sorts of materials must be procured.

True, he said.
Then we must enlarge our borders; for the original healthy State is no longer sufficient. Now will the city have to fill and swell with a multitude of callings which are not required by any natural want; such as the whole tribe of hunters and actors, of whom one large class have to do with forms and colours; another will be the votaries of music –poets and their attendant train of rhapsodists, players, dancers, contractors; also makers of divers kinds of articles, including women’s dresses. And we shall want more servants. Will not tutors be also in request, and nurses wet and dry, tirewomen and barbers, as well as confectioners and cooks; and swineherds, too, who were not needed and therefore had no place in the former edition of our State, but are needed now? They must not be forgotten: and there will be animals of many other kinds, if people eat them.

Certainly.
And living in this way we shall have much greater need of physicians than before?

Much greater.
And the country which was enough to support the original inhabitants will be too small now, and not enough?

Quite true.
Then a slice of our neighbours’ land will be wanted by us for pasture and tillage, and they will want a slice of ours, if, like ourselves, they exceed the limit of necessity, and give themselves up to the unlimited accumulation of wealth?

That, Socrates, will be inevitable.
And so we shall go to war, Glaucon. Shall we not?
Most certainly, he replied.
Then without determining as yet whether war does good or harm, thus much we may affirm, that now we have discovered war to be derived from causes which are also the causes of almost all the evils in States, private as well as public.

In my experience, the correlation between cities and drug abuse is no mystery. We see its everyday form all around us and ignore it without a word because we have become accustomed not just to it, but to its necessity. That is the everyday alcohol overuse of the working proletariat/drones/plebes, which is most visible through the carnage on our roads:

According to the committee, one-third of all traffic fatalities since 1982 have been alcohol related. In 2010, the crashes caused $121.5 billion worth of damages the study says, including medical costs, earning losses and vehicle damages, among other factors.

Why do people drive drunk? Who knows, but presumably they do not like to drink at home, probably because they cannot be with other people that way, so they are drinking away from home and then driving back. That is the majority anyway; maybe some others like to raise their driving handicap by downing a few before they go road rally racing, but most of them appear to be social drinkers.

This leads us to ask why so many people are drinking in the first place to the point where they cannot operate a motor vehicle. In my experience, people drink because they perceive it to be fun, mainly because it consists of a few hours (1) forgetting details of the periphery of one’s existence and (2) not caring about all the things that worry us, plus a little dizziness and a giddy sense of loss of control.

Drinking pairs up with tension in our literature and history. When people are under stress, or bored, or both, they drink. When they are worried, a form of stress, or fatalistic, which is the result of too much stress and not enough efficacy, they drink. In addition to that, they also drink when socializing or otherwise having a good time in order to be more relaxed. On top of that, there are some who just drink or take drugs regardless because they are addicted, but this seems to be the minority.

In a healthy society, we can imagine the ideal: people live in communities where they like their neighbors, so they walk on down to the local pub for a few pints and then go home fuzzy-headed and mellow. In the urban setting, unlike the rural, one does not know one’s neighbors, and so there is really no point to a local pub; instead, they are located in party districts where there are other clubs and bars. Afterwards, everyone has to get home somehow, and it is usually at the time when public transport stops running or becomes erratic.

What we are seeing instead, however, is people going out to drink on any given week or weekend night and drinking to the point of being thoroughly inebriated, then passing out in their cars and running red lights or sliding off the road. This is not relaxation; it is self-erasure. These are people who want to be unaware of their world for a few hours because only that seems to bring them pleasure.

This follows with what Plato observed about cities: once people are cut off from normal social life, and locked into a lifestyle motivated by commerce, they start demanding luxuries and excesses in order to compensate for the misery they feel. To them, over-indulgence is like a candy or a spicy sauce, a little treat to help them make it through a life they do not really believe in.

And so, we return to the cause for alcohol and drug overuse. People are displeased with their lot in life or merely their world. They are unhappy to the point where obliteration is preferable to relaxation. They do this on a regular basis, just to get through the day, and society tolerates it because this constant intoxication enables people to keep going back to their tedious jobs.

It seems like our modern alcoholism is a combination of a lack of something better to do, and a desire to destroy the lives that we are leading, or at least to be free of them for some time. Our modern drug addiction follows the same pattern. If people want to argue that the opioid crisis is not the result of despair, they will have to look toward the motivations of users, not supply.