by Jonathan Peter Wilkinson on November 9, 2015 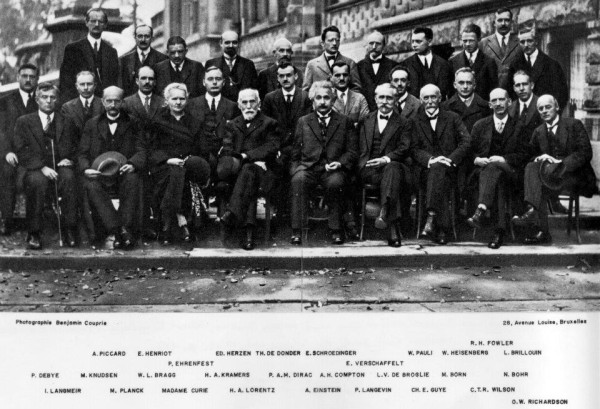 The great scientists of yore stood mighty above the struggling beetle mobs of the late 19th and early 20th Centuries. The names, Fermi, Bose, Einstein, Curie and Dirac ring out like those of the twelve apostles as they truly were the patron saints of a new technological age.

I owe a debt to Bernoulli every time a brew another batch of beer at home. I owe another ten-pence to Satyendra Bose when my microwave oven goes â€œbeepâ€ and signifies that my coffee is now suitably warm. This list of small but worthy homages could go all day long. Atop the commanding height of its parabolic cultural trajectory, the brilliance of the scientific mind in the Modern West was truly a miracle of the age.

Yet as the upward momentum flags, the gravitational potential energy accumulates and the pendulum inexorably reverses its swing, the children spawned and nurtured at the feet of Modern scientific brilliance devour the wellspring of their comfortable benefice. President Eisenhower warned of the corruption from scale and monetization. In his 1960 Farewell Address, he had the following words of warning regarding the fate of science in the Modern World.

Akin to, and largely responsible for the sweeping changes in our industrial-military posture, has been the technological revolution during recent decades. In this revolution, research has become central, it also becomes more formalized, complex, and costly. A steadily increasing share is conducted for, by, or at the direction of, the Federal government.

Today, the solitary inventor, tinkering in his shop, has been overshadowed by task forces of scientists in laboratories and testing fields. In the same fashion, the free university, historically the fountainhead of free ideas and scientific discovery, has experienced a revolution in the conduct of research. Partly because of the huge costs involved, a government contract becomes virtually a substitute for intellectual curiosity. For every old blackboard there are now hundreds of new electronic computers.

The prospect of domination of the nation’s scholars by Federal employment, project allocations, and the power of money is ever present â€“ and is gravely to be regarded.

The great thinker and writer Michael Crichton warned of prospect of movement politics corrupting the integrity and rigor of scientific inquiry. In his amusing and profound speech â€œAliens Cause Global Warming,â€ he describes how pop politicized science undermines the legitimacy of intellectual materialistic inquiry.

The world might not be a very good place, but science would make it better. And it did. In my lifetime, science has largely fulfilled its promise. Science has been the great intellectual adventure of our age, and a great hope for our troubled and restless world. But I did not expect science merely to extend lifespan, feed the hungry, cure disease, and shrink the world with jets and cell phones. I also expected science to banish the evils of human thoughtâ€”prejudice and superstition, irrational beliefs and false fears. I expected science to be, in Carl Saganâ€™s memorable phrase, â€œa candle in a demon haunted world.â€ And here, I am not so pleased with the impact of science. Rather than serving as a cleansing force, science has in some instances been seduced by the more ancient lures of politics and publicity. Some of the demons that haunt our world in recent years are invented by scientists. The world has not benefited from permitting these demons to escape free. But letâ€™s look at how it came to pass.

A third vile affront to the edifice of science has been perpetrated by the current generation of vipers. Certain scientific beliefs have become markers of both status and moral acceptability. They have taken on a coercive role and require faith-based acceptance. Like the Nicene Creed, they are the catechism of the true believer. Dr. Richard Lindzen of MIT describes the latest canonization of scientific theory with respect to Global Warming.

â€œGlobal Warming has become a religion,â€ writes Lindzen. â€œA surprisingly large number of people seem to have concluded that all that gives meaning to their lives is the belief that they are saving the planet by paying attention to their carbon footprint.â€ â€œThere may be a growing realization that this may not add all that much meaning to oneâ€™s life, but, outside the pages of the Wall Street Journal, this has not been widely promulgated, and people with no other source of meaning will defend their religion with jihadist zeal,â€ he added.

Thus, the children blessed with the riches of science have squandered an inheritance of Croesus in a manner reminiscent of the Prodigal Son. The monetization, the politicization and the deification of science have all deflected intellectual inquiry and watered down its rigor to the point that it no longer successfully assists human endeavor. In attempting to immanentize the eschaton* through the mystical invocation of some sciency, far-out science god, the newest of The Modern have deliberately missed the point.

Like Jesus chasing the moneychangers and mountebanks out of the temple with a whip, the intellectual neo-reaction will have to reclaim science by stripping it back to its roots. Science is not a quest for wealth. It is not a quest for justice. It is not a religious source of enlightenment. It is the intellectual and philosophical set of mechanisms by which we grind away at natureâ€™s hardest and most intractable problems until us as a species level up.

The great scientists of old knew this and praised the gift of fire brought forth by Prometheus. The fakers and Pharisees of the new join Michael Mann and the malignant Poltergeist Rachael Carson to dine on the liver of Prometheus with a nice steaming side of fava beans and rice. As we argue to right this tragic injustice and preserve this unalloyed good brought forth by Modernity from the cascading ruins that will rain down among us, our battle cry could rightfully ring out â€œBack to The Future!â€

Democracy is the assumption of guilt | Death through Altruism: The European Achilles Heel