Savonarola Is The End State of Cultural Collapse

by Jonathan Peter Wilkinson on November 8, 2017 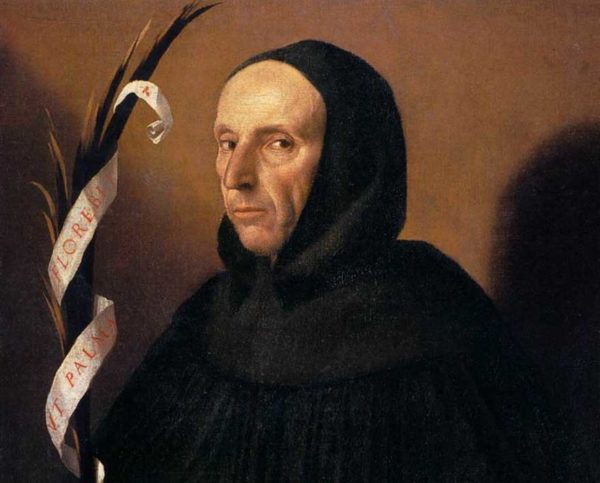 And you’re gonna get Jesus too. It won’t be nice, happy Cuckservative Jesus. He won’t be very happy. His zeal-infected followers won’t feel that way either. They’ll take one look at Hillary, Michelle Obama, or even all six hundred obnoxious pounds of Rosie O’Donnell and realize that Cotton Mather kind of had a point.

So maybe we can just get away from it all. We’ll go to the movie theater and…contribute money to the bank accounts of guys who jack themselves off to water the geraniums.

He chooses to live a gay lifestyle. Does that mean it isn’t hardwired? Could he have married a high school cheerleader, rather than buggering some poor wannabe Key-Grip? If choosing a gay lifestyle means you attempt the statutory rape of 14 year-old boys, does ISIS have a point when they chuck them off the roofs in Ninevah?

These are questions that only have to be asked when equality and tolerance are the watch words of a managerial society that keeps hammering down the nails that stand up too high. We are getting what we’ve been told to tolerate for the last century and it increasingly tastes like Jonestown Koolaid. People are spitting it out and then projectile-vomiting whatever they managed to initially keep down. This scares your average Cuck-Stonertarian.

The fallout from the Harvey Weinstein scandals and the ripples from the “#MeToo” movement are having indubitably positive effects â€” above all, exposing and bringing to account predators who have enjoyed impunity due to their power and status. But there are some pitfalls. Many people â€” not just men with skeletons in the closet â€” fear that careers may be destroyed over minor misconduct and ambiguous transgressions. Troubling rhetoric abounds, condemning all sexually tinged dynamics in the workplace, stereotyping men as abusers and women as perpetual victims in need of quasi-Victorian protections..

And this sort of a destructive overshoot is exactly what you can expect. People are rediscovering why we had cultural standards. Chivalry, courtship, romance and gender roles all kept the shaved monkees from chucking too many nasty turds. Cultures police themselves and make civilized living viable. Kill the culture and the civilization dies. A dead civilization doesn’t just go away. It maunders like a Zombie Extra, long after The Walking Dead has nuked the fridge and nobody cares what Machona does on the next episode.

How do you get rid of this garbage? You burn it in the burn barrel: three parts diesel, 1 part Mo-Gas. Chop, stir and try not to breathe the smoke in. Once a culture has been poisoned, its civilization is dead. The civilians don’t like that. Once they realize that Rome is burning, they demand answers from the people that promised them happiness while stealing their future. They don’t get answers from the people who lied to them. There are no answers, so somebody else offers you one. Duterte didn’t become president in a healthy, thriving society. Trump didn’t either.

So who do we get if we don’t pull ourselves out of the ditch? We get the guy who fires up the bulldozer and fills that ditch with dirt and buries all the sorry losers who can’t climb and dig fast enough. We get Savonarola who turns the rhetoric of Jerry Fallwell into the actions of an infuriated Oliver Cromwell. Anybody with a brain should be purging the rot around them as peaceably as is still possible. It’s going to get taken care of. It will be done with pruning shears or a flame thrower. The choice is now yours, in the immediate vicinity around you. Amerika died as functional, decent society. We’re debating how violent and murderous we are going to have to be in order to take out all the rotting trash.