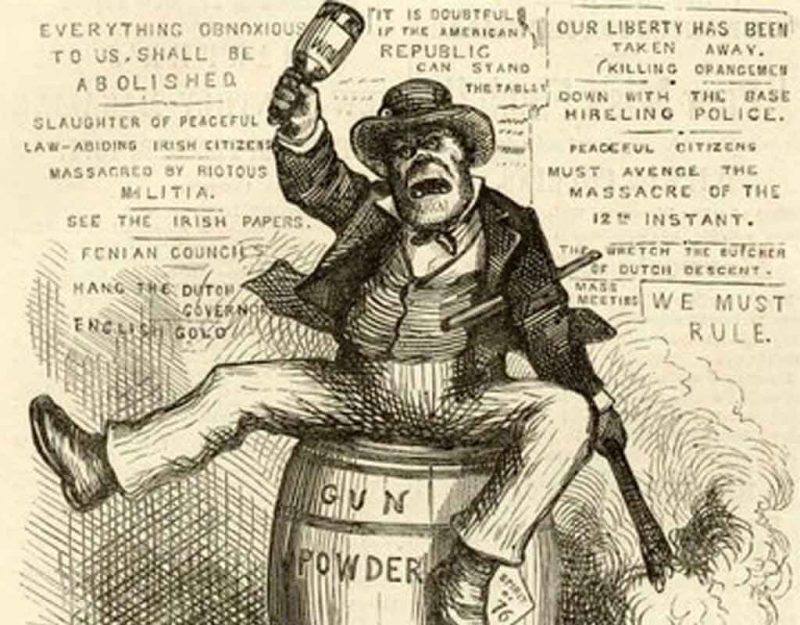 When behaving badly, do so in an understated fashion to remain below the radar screen. A simple orange polo shirt in honor of St. Paddy’s Day speaks volumes without yelling or even disturbing the peace. I like to think of it as sartorial passive-aggression. Perhaps I’ll also wear a fleur-de-lys on El Cinco De Mayo. And not just because I hate Spics and Micks any worse than I would Krauts, Tea-Bags, Jappysans, Knee-Grows, or even The Dreaded Baizou.

Now why insult Irishmen or Mexicans on their special holidays? Because these holidays exist to do exactly that. Think of it as a reification of a nasty name. What do people do on St. Patrick’s Day? They go on Irish Sabbatical and hope they don’t wake up in jail or some fetid gutter. I’ve been told the hangovers hang further when the front of your shirt is coated in ditch algae. And who amongst the Yob-Mob celebrating El Cinco De Mayo can even name a Mexican other than Jose Cuervo?

These two holidays are exercises in extremely, extreme, extremism. They are sanctioned racism. Not only were both Ireland and Mexico fundamentally Finlandized as nations, but each culture was subordinated and sent into diasporic exile from their ruined homelands. St. Patrick’s Day and El Cinco De Mayo are how the conquerors spike the football.

The Irish and Mexicans are “honored” by debauched idiots. Nothing quite respects The Emerald Isle like tying on a few too many and yelling “Erin Go Braless!” These holidays are for the sake of mockery. They celebrate these two cultures the way Englishmen “honor” Guy Fawkes once a year. When “Crackers” are set off in honor of Guy Fawkes Day, they are in commemoration of The Gunpowder Plot having failed miserably at blowing up Parliament. Fawkes was an early, and far more ambitious, forerunner of Timothy McVeigh.

Perhaps that’s why I stopped liking 17 March after maybe hangover number two. I’ve never liked El Cinco because Corona Beer is only properly enjoyed after a scuba dive at the beach. In reality, everybody alive sometimes fulfills the old Marxist definition of racism. Some expressions of it are just more acceptable than others.

This is conversely true of nationalism as well. Modernity and crowdism both fear and despise nationalism and racialism. The entire globalist enterprise would be poisoned by either in unadorned splendor. So we get controlled versions. A thing that Baudrillard could understand.

It’s all a steam valve to make people accept their cultureless state of humiliation. Just keep on working for that pot o’ gold at the end of the rainbow. The reason we have St. Paddy’s Day is not to celebrate the Irishman. But rather instead, to bury him in a symbolic and acceptable fashion. To do otherwise would extremely extreme extremism.