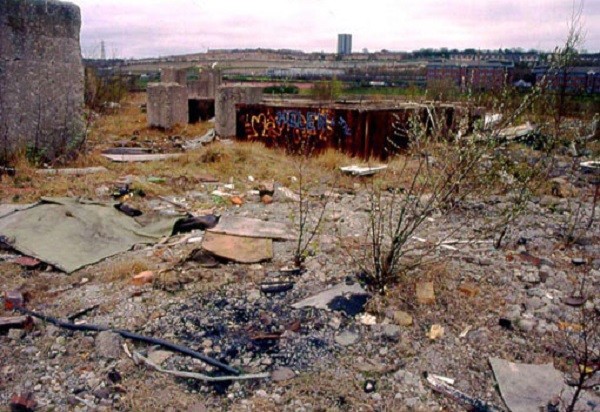 Those of us born into this time inherit a world of ruins. The promised land of equality has put the ego before sanity, creating an era in which only the idiots thrive, because for them it is paradise. With everyone equal, we are all important, but reality itself is not important because it is not us. And thus like every society that has collapsed before us we have used law and money to hide away the consequences we will face for our denial of what is plain as the noses on our faces, and instead have drifted into a communal narcissism where good feelings predominate at the expense of honest thought.

Our society — which in turn determines what options will be available to us for our future — has been stolen from us. Worst of all, the thief is ourselves: people acting rationally in self-interest chose to adapt to our notion of communal narcissism, and profited from it, but the cost was further passage down the trail to oblivion. We as those who come after them can enrich ourselves and escape to gated communities, then congratulate ourselves on our new-found wealth and social prestige like generations before us, but that leaves the problem intact. Our society is infected with illusion and it will not stop until it suicides.

We cannot smash evil with non-evil; we must instead have a purpose, a goal, and role toward accomplishing those. This turns our faces from the argument as framed by those who want us to fail and instead we can look at reality itself and choose a future that might be not only non-failing but also encouraging and exciting. We need to aspire to something, or we will settle for the usual cons that conceal evil power seizure behind altruistic and pacifistic ideals. We need a goal that is not within what we have now, but can be found in exceeding what we are. Improving who we are, instead of replacing ourselves with the latest trend or idea and hoping to derive meaning from that, which is a backward approach to the sane idea of using ideas to express a goal and working toward that.

For these generations — X, Y and millennials as well as those who follow for them — our immediate task is to tear down what is ruined and replace it with that which is living. The ruin is Amerika, the dystopia-Utopia of collective emotion and self-esteem through ideology that has taken over Europe, North America and the world beyond. All that it promises are lies cloaked in ideas which, for social reasons, cannot be denied. It uses these ideas as a shield and a justification, and leveraging its power from that justification, grows to take over every aspect of our lives and make us slaves toward its ends. But then, since it has no goal except power itself, this leads nowhere but to more slow degradation of society and self.

The following list of complaints addresses the blight that modernity has fostered in our lands:

The worst part of this situation is that all of the decisions that landed us in this pickle have been “logical.” In reaction to what came before them, people made rational decisions that led to the best of the possible options offered to them. But this is a trick: the real option we want — a functional society instead of a popularity marketplace — is never offered. We spill our blood over many battles for details and cannot see the bigger picture, in which all of our logical decisions are in fact insanity that will lead us nowhere but to destruction.

Any mentally healthy person will find this society unbearable on a daily level, with its ugly streets, dramatic people, make-work jobs, constant lies paraded as virtue and our time being wasted on the trivial when it could be spent in getting to know ourselves and putting our heads in sane places instead of the neurotic, solipsistic and consumptive mindset this society fosters and requires for its favor. We are being brainwashed into a lifestyle and values system which is anathema to all healthy things and which destroys our chances for happiness while increasing our chances of pleasure in the moment. “Live in the now,” they say, by which they mean a future of actually enjoying life has been foreclosed to you.

Our goal is to destroy what is in power because it is corrupt. This includes not only the lying government and the deceptive media, but all people who have benefited from the system as it is now. To benefit, you must not only accept the lie but force it onto others, the oldest “multi-level marketing” or pyramid scam in existence. These people are therefore corrupted and cannot be saved and must be exiled, executed or otherwise driven out of our society. They used the lie to their own advantage, which makes them criminals, not leaders. Our media pundits, “entertainers,” fake religious leaders, corrupt politicians and leaders of useless industry are all parasites like the leech or the mosquito, and we need our blood to rebuild not to subsidize these otherwise useless people.

A new creation is needed, arising from a desire for purpose instead of equality. Toward this goal we each do our part, and so derive roles which are not interchangeable but specific to us. We value ourselves by what we are able to do, not what titles or money we have tricked a corrupt system into paying us. This will reverse the current situation, which is where the parasites are on top in the workplace and in politics, elected by the credulous millions and their pretense of making the “right” choice when they actually make the convenient one that flatters their egos, and instead will put the most capable people in charge. We can have one or the other, rule by parasites or rule by the capable, but not both.

We face two groups of dangerous fools. The idiots wearing pukka shell necklaces and listening to Coldplay must be made into serfs; they cannot manage their own affairs and when given money become destructive. The corrupt leaders like Joseph Biden, David Cameron, Tony Abbott, Ed Miliband and Barack Obama must either be forced to serve as slaves for their sins, or be removed from society by any means necessary without particularly concerning ourselves with these means. If our fellow citizens require the sight of a smoldering heap of corpses to realize that change is upon them, let us sacrifice the false and corrupt! It is not as if we have any shortage of such people. A round of violent executions might startle these people out of their sleep and make them focus on the consequences of their actions.

Abolish the rules. These are designed to protect idiots, who suffered under the old order which measures the consequences of our actions and held people responsible when their fond fantasies turned out to have bad results. By putting the burden back on the individual to act so that the effects are right, instead of having “good intentions” or conforming to the trend of the time, we put our people on notice that all of us are responsible for what comes of our actions. This removes the hiding places of parasites and deceivers and makes each citizen aware of their duties in a clear and unambiguous manner.

Finally, deport everyone who is not of the historical American majority — English, German, Scots, Dutch, Scandinavian and French — because we need a clear identity as a people which lies in the Western European traditions from which our rules, aesthetics, culture and values originate. This is not deportation because they are bad; it is deportation because diversity fails and history shows us no successful diverse nations, only many failed societies which just happen to be diverse. Diversity is a symptom of decay and not of health.

As individuals, we have a choice for our future. We can follow what past generations did and keep passing the buck along to the next generations, fully aware that we are on a slow path to failure and for each new generation the future is darker than for the previous. Or we can throw out the old, corrupt ideas of “equality” which originate in the Magna Carta and French Revolution and certain religious fanatics before them, and destroy all of the parasitic dystopia that those lies have wrought, in its stead creating a new society with a better future not just in avoiding present problems, but in directing itself toward a higher way of life and future that is not just free of disaster, but filled with joy, purpose, belonging and meaning. We will be judged by history for what we do.