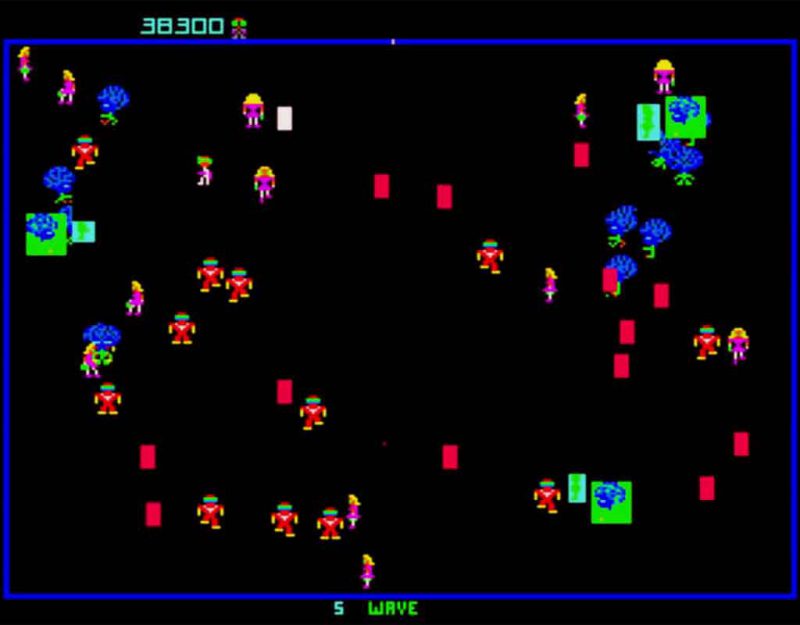 Humans communicate through metaphors, which are more flexible than fact, which remains fixed at a certain time and place. A metaphor, like a story, tells us more of how something relates to the world around it than what it is as a dissected and deconstructed object.

In our quest for metaphor, we look toward some of the stories of our past, and some of these were expressed in videogame form. Robotron: 2084 opens with an ominous message:

Inspired by his never ending quest for progress, in 2084 Man perfects the Robotrons:

a robot species so advanced that Man is inferior to his own creation.

Guided by their infallible logic, the Robotrons conclude:

The human race is inefficient, and therefore must be destroyed.

The producers of the game let you know that you were entering a future dystopia-utopia:

It’s the year 2084, and robots are turning against their masters. Saved by a genetic accident, only you can resist their mutant re-programming and defend humanity. Grunts close in. The Brains launch missiles. Tanks, Spheroids, and Electrodes spell death. And then, there’s the Hulk — immune to your laser. Your mission is to rescue, evade, and destroy.

The first level tells you your mission: SAVE THE LAST HUMAN FAMILY.

You can play the game here or here in your browser.

What makes this metaphorical is that we find ourselves in a similar situation. Pursuing progress, humans have decided to eliminate what is natural in ourselves, replacing our human side with a purely economic creature who is more efficient but lacks a soul.

The grunts are the everyday angry modern citizens who rage about possessed only of a desire for convenience and an impulse to destroy. The brains are our nasty intellectuals, who like the video game characters re-program normal humans into something called “progs,” zombie robot mutants who attack blindly and obsessively.

Tanks and Hulks are like our institutions and law enforcement, indestructibly vast and moving slowly to eliminate those who dissent. Spheroids and electrodes probably fit more into the category of everyday traps, like ghettos or terrorists.

Will we survive? Only time can tell. After the 1950s, science fiction took a dark turn, and out of it came movies and video games, like Robotron: 2084, which showed us technology and industry escaping our control and acting for its own power.

That in turn implicates the other form of “progress,” that toward equality, which breaks the connections of humans to their world and turns them into self-serving beasts compelled to destroy any order, decency, goodness, light, or happiness in the world around them.

Prophetic, this game reflects too much of our world to write off as simply entertainment.