In contrast to days-gone-by, modernity lacks both initiation ceremonies and public ritual.Â  Even prayer before meals is becoming less and less 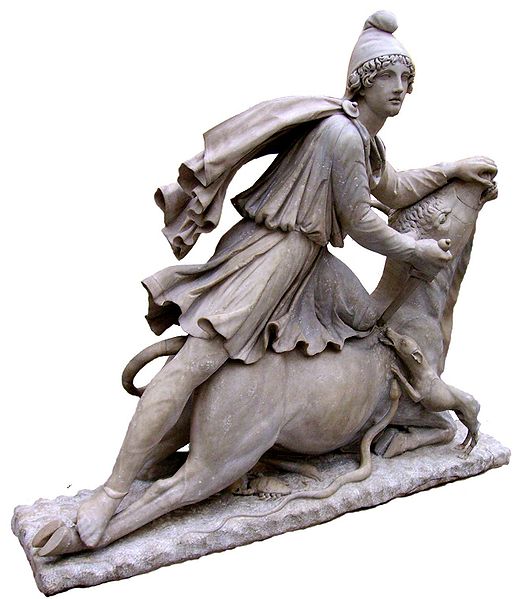 Ritual sacrifice, as grisly as it is, was a ubiquitous reality common to all religions and cultures of the world.Â  It is now a thing of the past.Â  Today we think of it as both silly and barbaric.Â  The two interpretations of sacrifice are as follows:Â  on the one hand, the ancients essentially thought that the sacrifice granted them magic powers and good luck from the Gods. Â On the other hand, more simply and less superstitiously, it was an expression of thanksgiving to God or nature â€“ a gift to the universe in exchange for the gift of life.Â  These two interpretations are likely both true, but there is a subtler implication that is being missed

The idea of sacrificing or wasting something for no visible or rational purpose is a symbolic expression of transcending the base and animal instincts for instant gratification.Â  If, as Brett Stevens points out, moral character can be defined as the ability to defer or avoid gratification in order to do what is correct according to an abstract order larger than the individual, then ritual sacrifice is merely the public, symbolic expression of this very lesson.Â  It is its visible realization in ceremonial form.Â  In contrast to the â€œmagical power interpretationâ€ that says because of the sacrifice, we will win in the end, it basically says: Â despite the sacrifice, we will still win in the end.Â  Ever hear the saying, â€œIâ€™ll beat you with one hand tied behind my back?â€

In order to win, or to become good at anything, one must sacrifice.Â  Itâ€™s as simple as that.Â  In a game of chess, or in warfare, it is essentially impossible not to sacrifice pawns.Â  The same thing with physical fitness â€“ you have to sweat, you have to bleed.Â  You canâ€™t get something from nothing.Â  In order to be ultimately gratified, one must sacrifice and do the necessary work first.

Man is both an animal and not-an-animal.Â  Man must both acknowledge and tame the wild beast within.Â  All great and noble cultures of the past reveal traces of barbarism:

At the bottom of all these noble races we cannot fail to recognize the beast of prey splendidly roaming around in its lust for loot and victory. This hidden basis from time to time needs to be discharged: the animal must come out again, must go back into the wilderness, â€“ Roman, Arab, German, Japanese nobility, Homeric heroes, Scandinavian Vikings in this need they are all alike.

It was the noble races which left behind the concept of the â€œbarbarianâ€ in all their tracks, wherever they went. A consciousness of and a pride in this fact reveals itself even in their highest culture (for example, when Pericles says to his Athenians, in that famous Funeral Speech, â€œour audacity has broken a way through to every land and sea, putting up permanent memorials to itself for good and ill.â€). This â€œaudacityâ€ of the noble races, mad, absurd, sudden in the way it expresses itself, its unpredictability, even the improbability of its undertakings â€“ Pericles emphatically praises the rayhumia [mental balance, freedom from anxiety] of the Athenians â€“ its indifference to and contempt for safety, body, life, comfort, its fearsome cheerfulness and the depth of its joy in all destruction, in all the physical pleasures of victory and cruelty â€“ everything summed up for those who suffer from such audacity in the image of the â€œbarbarian,â€ the â€œevil enemy,â€ something like the â€œGothâ€ or the â€œVandal.â€ – F.W Nietzsche, On the Genealogy of Morals, First Essay, Section 11

A ritual sacrifice, as barbaric as it is, reconciles these polar opposites in one, definitive act.Â  It is not only the animal act of killing; it is also the non-animal act of depriving oneself of something valuable, namely, sustenance.

The ritual sacrifice is indeed a form of thanksgiving to God, nature, fate.Â  It is a gift to the Gods in exchange for the gift of life, but it is also a symbolic expression of transcending the animal instincts.Â  To do something completely unnecessary that is at odds with oneâ€™s biological imperative, to waste potential sustenance, is to transcend oneâ€™s animal aspect.Â  To waste, to have contempt for body and comfort is actually an expression of supreme confidence in the will of the universe.Â  If man only and always followed his biological imperative or if he only and always made perfectly rational decisions, he would, in fact, not be man.Â  He would either be an animal or an automaton.Â  Without the irrational, without violence, without contempt for safety, without waste, reality would be a computer program.Â  The charm of life would be lost, there would be no stakes, and life would be a burden, rather than a gift.Â  It is as much a form of fatalism as is giving oneâ€™s fate completely and utterly to God.

Even Plato, the most rational and well-thought-out of all men purposely refrained from tinkering with religious ceremony:

What is now left for us to deal with under the heading of legislation?

For us nothing, but for the Delphic Apollo it remains to enact the greatest, finest, and first of laws.

Those having to do with the establishing of temples, sacrifices, and other forms of service to gods, daimons, and heroes, the burial of the dead, and the services to ensure their favor.Â  We have no knowledge of these things, and in establishing our city, if we have any understanding, we wonâ€™t be persuaded to trust them to anyone other than the ancestral guide.Â  And this god, sitting upon the rock at the center of the earth, is without a doubt the ancestral guide on these matters for all people. – – The Republic, Book IV, 427b

Furthermore, the â€œmagic powersâ€ interpretation is something of a straw man because after the sacrifice, the men still did battle, they still planted the crops, and they still went out and fished.Â  They didnâ€™t just sacrifice the animal and sit back and wait for God to do all the work.Â  The irrational will, expressed in the form of sacrifice is the exact same irrational will and spirit necessary to go to battle, to wake up every morning and fish, hunt, and plant crops despite the fact that nothing may come of it.

Think of it this way:Â  imagine a tribe of fishermen.Â  They worship the God of the Sea and give thanks by sacrificing several fish.Â  On lean days of fishing, this would be a terrible decision, but on abundant days, there are fish to spare.Â  The real work and sacrifice for catching the fish, of course, consists in getting up early, preparing the boat and the gear, staying out all day, and learning the behavior and habits of the fish, the cycle of the tides, the ways of the currents or what have you.Â  But how do you make this lesson real to the women and children back on land?Â

You can explain it to them all you want, but by publicly wasting several fish, in front of everyone, this lesson is driven home on a deeper level.Â  Surely everyone would love to fill their bellies just a little more on those extra fish, but what about the motivation to get up the next morning to do it again?Â  What about the next generation of fishermen?Â  Too much satisfaction kills the motivation to be even better.Â

Again, morality is the delay and putting off of gratification until the necessary work is done.Â  Sacrifice realizes morality in a symbolic act.Â  Without the ritual or ceremony, morality remains â€œinvisible,â€ and canâ€™t be demonstrated or proven to the next generation.Â  A person or society unwilling to sacrifice is not an indication of supreme rationality, but an indication of a lack of vitality and confidence.Â  The Iroquois knew this:

In every deliberation, we must consider the impact on the seventh generation… even if it requires having skin as thick as the bark of a pine. – Great Law of the Iroquois

Viewed in this way, sacrifice and/or morality could be described as making, what appears to be, an irrational decision in the short term, for a long-term, rational gain.Â  Life is a mystery and there is something more to life than mere survival â€“ a destiny.Â  That the free and enlightened man should only and always make the rational choice is a paradox, as his free will and choice is then negated.Â  Sacrifice is not delusional so much as it is irrationally confident.Â

Sacrifice does not grant power, but it is symbolic of what must be done to gain power.Â  Perhaps we project onto the ancients what we secretly wish for ourselves:Â  that we will receive fortune from on high in exchange for hardly doing anything.Â  Paradoxically, sacrifice is the highest expression of vitality and life overflowing.