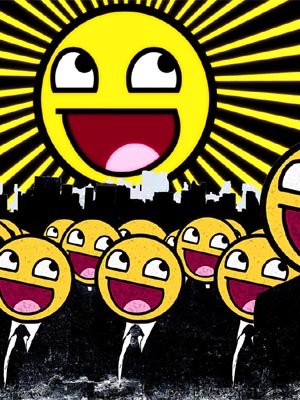 We normally think of time in BC/AD, but we should probably think instead in terms of before and after 1789. In that august year, our ancestors decided to shift to liberalism, which is a philosophy based upon the equality of all individuals.

In other words, it’s wishful thinking made into policy.

The revolution brought us the equality of all individuals, which in other words means we are no longer focusing on the quality or accuracy of our thinking; we’re trying to include everyone and if their ideas are of low quality or insane, we reverse our thought process and reason that because they’re equal, their insane low-quality ideas must be just as important as sane ones.

Confused? It’s a deliberate baffler; it’s the language of logic used against itself. Yet it is how the liberal establishment has maintained increasing degrees of individual equality, applied at the points of swords and the threat of social ostracization, since 1789.

And as we can see, things haven’t been going well. Not so much the recent recession, but the steady downward spiraling motion. Other than our technology, is life better or worse than in the 1950s? The official propaganda will have you bleat out something about better conditions for women and minorities, but instead, think of society as a whole.

Our art is garbage. Our cities are ugly; our architecture has been replaced by plastic boxes. We eat literal garbage re-packaged as food. People build their homes around a room built around a television. We tell each other lies, rot in hours of traffic and lines, put up with endless bureaucracy, and are surrounded by fools.

Progress? Well — we certainly have equality at least.

My eminent colleagues at Occidental Dissent refer to the present time as “Black Run America (BRA)” because they see how our government seems to work to defend its chosen minority, but I have to respectfully disagree. African-Americans are the token that is being used to force equality on us. The real agenda is equality, which naturally benefits those who are most numerous and least capable of distinguishing themselves (thus in need of equality).

This time isn’t BRA; it’s PRA, or “prole-run America.” And it’s not just America, it’s all European-descended peoples worldwide; we have opted for liberalism, and equality, and now we are ruled by the former unskilled labor of Europe. That is what the revolution brought us.

The opposite of the revolution is evolution. Evolution means we get better at doing what we do; this happens because some break away and rise above the herd, and so we confer on them greater power so they can spread their knowledge or improve our society according to their abilities. This is heresy to those who insist on equality.

The revolution-versus-evolution battle has been raging for centuries. The leftist/liberal crowd, composed of all of those who need equality through a sheer lack of differentiation by ability or action, stops at no outrage. They lie; they revise history; they distort; they accuse their opponents of all these things to conceal their own dissimulation.

But few are noticing, because there’s this huge market in proles. Proles buy the easy products with wide margins because proles, by their very nature, waste all of their money no matter what we sell them. If we remove all harmful products, you’ll find the proles clustered around basement stills and bathtub gin. Their agenda is always to escape life because they have a fundamentally negative attitude toward it because they are not competent for most of its tasks, which is why our ancestors rather generously made them serfs.

The proles do all sorts of amusing antics. They become hipsters, they occupy Wall Street, they blame whoever’s in charge for their problems, and they try to convince us that large corporations, kings, religion, etc. are the problem, when humanity’s downfall occurs through the laziness, incompetence and stupidity of its individuals.

It has been only a couple centuries since 1789, yet our decline has been so vast and pervasive that people are finally starting to take note. Revolution? Forget that. Let’s evolve, and become better people, instead of finding more targets to blame for our own failings.