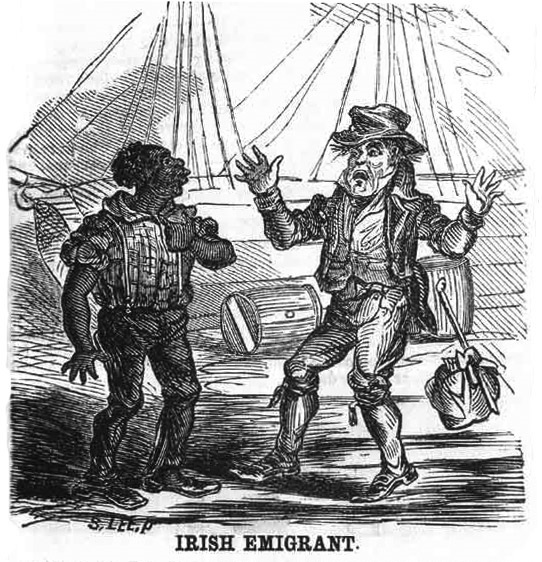 The media will never tackle this, but Donald Trump recently addressed the oldest problematic immigrant group to America: the Irish.

In doing so, he revealed the vast amount of of illegal Irish immigration to the United States:

Kenny congratulated Trump on his election in remarks, telling the American president who likes to talk about the victory, ‘You beat them all.’

But then in a coded message about the estimated 50,000 Irish living in the U.S. illegally, he raised the topic of illegals with Irish passports – carefully never using the phrase illegal or undocumented but talking about being able to ‘stand out in the light’.

…An estimated 50,000 of the United States’ illegal immigrant population is from Ireland. Another 34.5 million Americans say they have Irish blood.

Other than the obvious, which is putting the lie to the Leftist assertion that recent immigration enforcement is “racist,” this revelation evokes knowledge of how disastrous immigration by other than Western European groups has been for America. Irish immigration provoked corrupt politics, a mixed culture, increased instability and finally, a political revolution toward blockhead fundamentalism.

This reveals how much each type of European needs a different type of civilization. Western Europeans prefer the orderly and abstract, starchily dry WASP society that the United States was before it failed; Southern Europeans and the Irish like Catholic theocracies; Eastern Europeans prefer strongmen in charge, hopefully standing next to a church. None are wrong but none are compatible.

A sensible policy might be for America to re-assert a WASP identity as we set about rebuilding this failed state and replacing it with a working nation. We cannot do that with the “proposition nation” and “magic dirt,” including as applies to Southern/Irish and Eastern Europeans.

With the rise of a WASP America, 35 million ex-Irish would return home bearing new skills and attitudes, helping Ireland recover from the slump it has been in since prehistoric times. Southern and Eastern Europe, both struggling to replenish their populations, would similarly welcome those who have been living in America.

Right now most Western efforts involve hard denial of the fact that Western Civilization has failed. Once we accept that, we can clean up the mess, put everyone back in the right place, and reconstruct a functional civilization without the errors of the past thousand years. The next thousand years are ours!