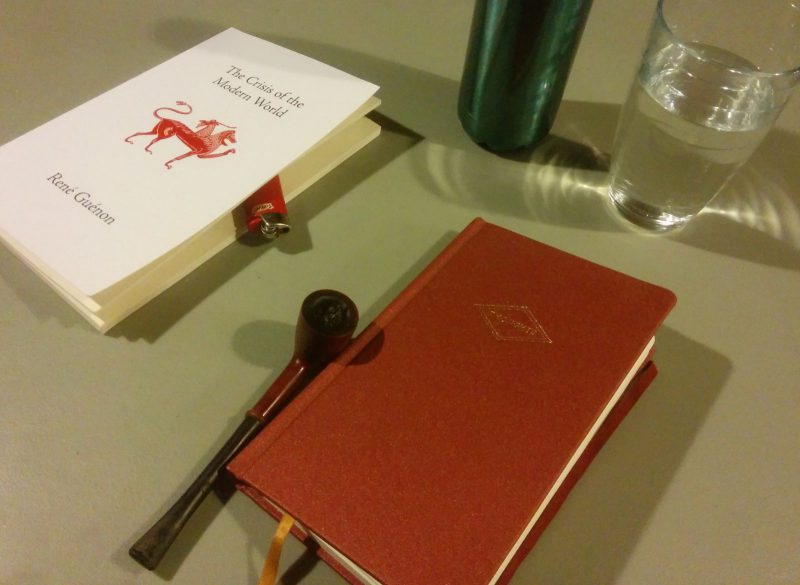 That there is something fundamentally wrong with the modern world is commonly intuited, whether consciously or not, and the widespread depression, self-destructive behaviors, and affinity for distraction present in the West, particularly among those who are more contemplative and sensitive to perception, is a testament to this. René Guénon’s The Crisis of the Modern World examines the nature and causes of this fall.

For anyone who does not already have some familiarity with its constituent concepts this book does not summarize easily. The metaphysical principles he frequently refers to are both something whose existence is in the modern wold denied as a fundamental assumption, and are of a nature such that they are not amenable to a literal description.

However, the section where he discusses democracy deals with more concrete concepts that can be more easily recognized by modern people and is at the same time a critique that is grounded in those metaphysical principles. His insight on democracy, valuable in itself, can serve as an entry point to his greater work.

What struck me as I read the following excerpts in the book was how well they stand on their own, and so here they are presented with minimal commentary.

It is the negation of these differences, bringing with it the negation of all social hierarchy, that is the cause of the whole disorder; this negation may not have been deliberate at first, and may have been more practical than theoretical, since the mingling of the castes preceded their complete suppression or, to put it differently, the nature of the individuals was misunderstood before it began to be altogether ignored; at all events this same negation has subsequently been raised by the moderns to the rank of a pseudo-principle under the name of ‘equality’. It would be quite easy to show that equality can nowhere exist, for the simple reason that there cannot be two beings who are at the same time really distinct and completely alike in every respect; and it would be no less easy to bring out all the ridiculous consequences arising out of this fantastical idea, in the name of which men claim to impose a complete uniformity on everyone, in such ways for example as by meting out identical teaching to all, as though all were equally capable of understanding the same things, and as though the same methods for making them understand these things were suitable for all indiscriminately.

False ideas like equality take hold in a population when there is both knowing liars to expound and disseminate them and unknowing dupes to be deceived by them:

Naturally, when we encounter ideas such as ‘equality’ or ‘progress’, or any other of the ‘lay dogmas’ that almost all of our contemporaries blindly accept–most of which were first formulated during the eighteenth century–it is impossible for us to admit that they arose spontaneously. They are veritable ‘suggestions’, in the strictest sense of this word, though they could not of course have had any effect in a society that was not already prepared to receive them; such ideas in themselves have not actually created the mental outlook that is characteristic of modern times, but they have contributed largely to maintaining it and to bringing it to a stage that would doubtless not have been reached without them. If these suggestions were to disappear, the general mentality would come very near to changing direction; and this is why they are so assiduously fostered by all those who have some interest in maintaining the confusion, if not in making it worse, and also why, at a time when it is claimed that everything is open to discussion, they are the only things that may never be discussed. Moreover, it is not easy to judge the degree of sincerity of those who become the propagators of such ideas, or to know to what extent they fall prey to their own lies and deceive themselves as they deceive others; in fact in propaganda of this sort, those who play the part of dupes are often the best instruments, as they bring to the work a conviction that others would have difficulty in simulating, and which is readily contagious. But behind all this, at least at the outset, a much more deliberate kind of action is necessary, and the direction can be set only by men fully cognizant of the real nature of the ideas they are spreading.

By its nature, democracy selects incompetence:

If the competence of specialists is often quite illusory, and in any case limited to a very narrow field, the belief in this competence is nevertheless a fact, and it may well be asked why it is that this belief is not made to apply to the careers of politicians and why, with them, the most complete incompetence is seldom an obstacle. A little reflection, however, will how that there is nothing surprising in this, and that it is in fact a very natural outcome of the democratic conception, according to which power comes from below and is based essentially on the majority, for a necessary corollary of this conception is the exclusion of all real competence, which is always at least a relative superiority, and therefore belongs necessarily to a minority.

Legitimate power comes only from above:

The most decisive argument against democracy can be summed up in a few words: the higher cannot proceed from the lower, because the greater cannot proceed from the lesser; this is an absolute mathematical certainty that nothing can gainsay. And it should be remarked that this same argument, applied to a different order of things, can also be invoked against materialism; there is nothing fortuitous in this, for these two attitudes are much more closely linked than might at first sight appear. It is abundantly clear that the people cannot confer a power that they do not themselves possess; true power can only come from above, and this is why — be it said in passing — it can be legitimized only by the sanction of something standing above the social order, that is to say by a spiritual authority, for otherwise it is a mere counterfeit of power, unjustifiable through lack of any principle, and in which there can be nothing but disorder and confusion.

People governing themselves is an absurdity and a usefully flattering illusion that provides control to the true power behind the facade of politicians:

If the word ‘democracy’ is defined as the government of the people by themselves, it expresses an absolute impossibility and cannot even have a mere de facto existence–in our time or in any other. One must guard against being misled by words: it is contradictory to say that the same persons can be at the same time rulers and ruled, because, to use Aristotelian terminology, the same being cannot be ‘in act’ and ‘in potency’ at the same time and in the same relationship. The relationship of ruler and ruled necessitates the presence of two terms: there can be no ruled if there are not also rulers, even though these be illegitimate and have no other title to power than their own pretensions; but the great ability of those who are in control in the modern world lies in making the people believe that they are governing themselves; and the people are the more inclined to believe this as they are flattered by it, and as, in any case, they are incapable of sufficient reflection to see its impossibility. It was to create this illusion that ‘universal suffrage’ was invented: the law is supposed to be made by the opinion of the majority, but what is overlooked is that this opinion is something that can be very easily be guided and modified; it is always possible, by means of suitable suggestions, to arouse, as may be desired, currents moving in this or that direction. We cannot recall who it was who first spoke of ‘manufacturing opinion’, but this expression is very apt, although it must be added that it is not always those who are in apparent control who really have the necessary means at their disposal.”

The unintelligence and ignorance of the majority is heightened, not attenuated, when aggregated:

Its most obvious flaw is the one we have just mentioned: the opinion of the majority cannot be anything but an expression of incompetence, whether this be due to lack of intelligence or to ignorance pure and simple; certain observations of ‘mass psychology’ might be quoted here, in particular the widely known fact that the aggregate of mental reactions aroused among the component individuals of a crowd crystallizes into a sort of general psychosis whose level is not merely not that of the average, but actually that of the lowest elements present.

[The influence of sentiment] is one of the chief obstacles in the way of understanding certain things, even for those who in themselves possess an intellectual capacity sufficient to understand them without difficulty; emotional impulses hinder reflection, and making use of this incompatibility is one of the dishonest tricks practiced in politics.

Democracy presupposes no unifying principle above the atomized individual:

Multiplicity, considered apart from its principle, and therefore as no longer capable of being reduced to unity, takes the form in the social realm of a community conceived only as the arithmetic sum of its component individuals; in fact, a community is no more than this, once it has ceased to be attached to any principle superior to these individuals. The law of such a community is literally that of the greatest number, and it is on this that the democratic idea is based.

By negating hierarchy, democracy negates the possibility of rule by the best:

Finally, there remains one direct consequence of the democratic idea to consider, and this is the negation of the idea of an elite; it is not for nothing that ‘democracy’ is opposed to ‘aristocracy’, for this latter word, at least when taken in its etymological sense, means precisely the power of the elite. The elite can by definition only be the few, and their power, or rather their authority, deriving as it does from their intellectual superiority, has nothing in common with the numerical strength on which democracy is based, a strength whose inherent tendency is to sacrifice the minority to the majority, and therefore quality to quantity, and the elite to the masses. Thus the guiding function exercised by a true elite, and its very existence–since of necessity it plays this role if it exists at all — is utterly incompatible with democracy, which is closely bound up the with egalitarian conception, and therefore with the negation of all hierarchy; the very foundation of the democratic idea is the supposition that one individual is as good as another, simply because they are equal numerically and in spite of the fact that they can never be equal in any other way.

Those interested in reading the The Crisis of the Modern World in its entirety can find a referral link in the books list, which if used will support this site.