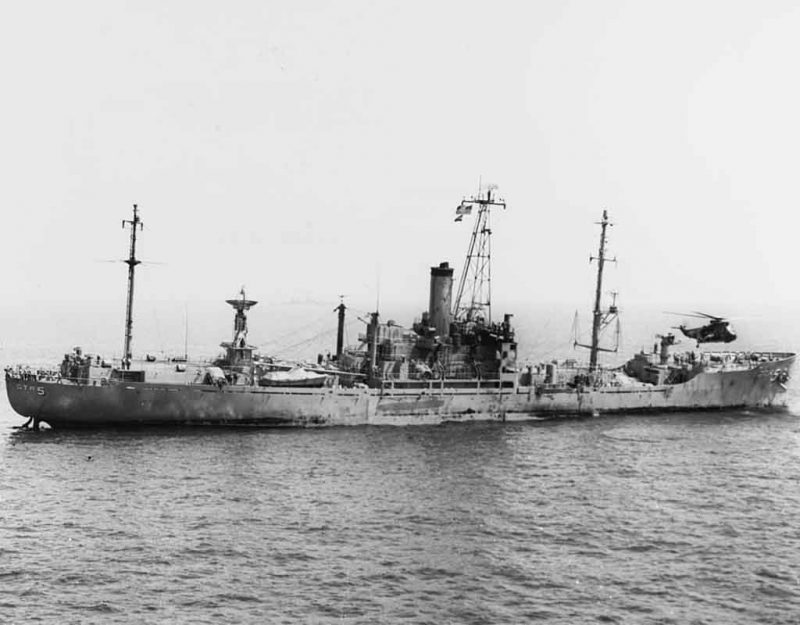 One of the cruelest aspects of democracy may be the ambiguity. We cannot trust the news or what politicians say because their job is to say what is popular; with large States, empowered by civil rights and anti-poverty mandates, the truth is often buried in bureaucracy.

The unarmed Liberty, which was carrying close to 300 people, was attacked by Israeli planes and ships. A distress call was sent and attack ended when the USS Saratoga and USS America were dispatched.

The attack killed 34 men and injured another 170 people.

The $40 million ship was deemed lost after the attack and sold for scrap.

No one is really sure why the ship was attacked, other than that it was intercepting messages from both sides during a war between Israel and Egypt:

Fisher was a 3rd class petty officer aboard the Navy’s technical research ship the USS Liberty that day when it was attacked by air and sea by Israel off the Egyptian coast during the Six-Day War. Virginian-Pilot archives suggest the Liberty had been intercepting battlefield messages of the warring nations.

When the Six-Day War broke out amid tensions between Israel, Egypt, Jordan and Syria, the ship was called north.

The U.S. and Israeli governments concluded the attack was a mistake after Israel said it thought the Liberty was an Egyptian ship, though that account has failed to convince many sailors, including Fisher. Israel later paid $6.8 million as compensation for those killed and injured.

On the 20th anniversary of the attack, a column in the Pilot said federal defense officials “have swept evidence concerning the attack under the rug of secrecy. … The government’s refusal to make the truth known is apparent to anyone who has talked with survivors or examined the facts.”

The Navy told survivors of the Liberty to keep quiet, Fisher said.

This still rankles many, as much for the cover-up as the attack, since the event was basically kept quiet for political reasons:

The White House, fearing the Israel Lobby, prevented the US Navy from going to the defense of the Liberty, thus sacrificing American lives, and further dishonored the US Navy by ordering Admiral McCain, father of the former US Senator John McCain, to orchestrate a cover-up. The surviving crew were threatened with court-martial and imprisonment if they spoke about the event. It was 20 years before one of the surviving officers wrote a book about the greatest act of shame the US government ever inflicted on the US military.

In 2003, 36 years after the Israeli attack on the Liberty, Admiral Tom Moorer, former Chief of Naval Operations and Chairman of the Joint Chiefs of Staff, convened the Independent Commission of Inquiry into the Israeli Attack on USS Liberty, the Recall of Military Rescue Support Aircraft while the Liberty was Under Attack, and the Subsequent Cover-up by the United States Government.

You can read the report online, here for example.

Much has been written about the influence of Israel on the American government, dual citizenship with Israel by American politicians, and purported Jewish control of the media.

In my view, the actual truth will be more nuanced and much less satisfying.

First, we are in a democracy. Contrary to a pleb-tier moron conservative meme, America is a liberal democratic republic, so “we are not a democracy, but a republic!” is just palaver for idiots. In a democracy, whoever says what is most popular wins, and that requires getting the message out there, whether with printing press, radio, television, or internet advertising. Money is required. Politicians thus are purchased by various lobbyists, including those for business interests, special political interests, and finally, ethnic groups. For example, Italian-Americans have a lobby, as do the Irish, homosexuals, and Christians. Any group with money and power is important, and American Jews are wealthy as are many religious groups to to varying degrees. Politicians cannot ignore a wealthy group because if they do, it will take that wealth to the other candidate. This is the democracy that you are told to defend and die for.

Second, we are a democracy that has not always been favorable to Israel. We could have accepted Jewish refugees from Germany in WW2 and avoided the Holocaust; we could have been more supportive of early Israel. Even more, our leaders change potentially every four years and at least every eight, so there is no expectation of consistency in our leadership. Some leaders on both sides of the political divide are hostile toward Israel or Jews.

Finally, politicians benefit from covering up their mistakes. This applies to both Israel and the United States. To cover something up, you first inject confusion, then hide as much as possible, and only much later let events come to light covered in paper and more fear, uncertainty, and doubt.

When we turn to the question of the U.S.S. Liberty in this light, more sense can be made of the conclusions of the Moorer report, including:

5. That in attacking USS Liberty, Israel committed acts of murder against American servicemen and an act of war against the United States;

6. That fearing conflict with Israel, the White House deliberately prevented the U.S. Navy from coming to the defense of USS Liberty by recalling Sixth Fleet military rescue support while the ship was under attack; evidence of the recall of rescue aircraft is supported by statements of Captain Joe Tully, Commanding Officer of the aircraft carrier USS Saratoga, and Rear Admiral Lawrence Geis, the Sixth Fleet carrier division commander, at the time of the attack; never before in American naval history has a rescue mission been cancelled when an American ship was under attack;

7. That although Liberty was saved from almost certain destruction through the heroic efforts of the ship’s Captain, William L. McGonagle (MOH), and his brave crew, surviving crewmembers were later threatened with “court-martial, imprisonment or worse” if they exposed the truth; and were abandoned by their own government;

8. That due to the influence of Israel’s powerful supporters in the United States, the White House deliberately covered up the facts of this attack from the American people;

9. That due to continuing pressure by the pro-Israel lobby in the United States, this attack remains the only serious naval incident that has never been thoroughly investigated by Congress; to this day, no surviving crewmember has been permitted to officially and publicly testify about the attack;

We see coverups on both the Israeli and American sides, suggesting that this incident has more depth than a mistaken identity; in fact, it was clear that Israel knew it was attacking an American ship.

However, we tend to forget the obvious: this was a spy ship intercepting messages from both sides.

Most likely, an Israeli field commander wanted to push ahead with an illegal order, and began his coverup of that by attacking a ship monitoring transmissions at the time. He hoped to sink it and blame Egypt. No one knows how high responsibility goes here.

The attack may have achieved its goal because, during the attack, it was unlikely that the U.S.S. Liberty could have received or processed transmissions coming from Israeli forces.

While no one really cares what Israel did to the Egyptians, Americans have a bad record of going in to defend democracy and universal human rights, even for people who are acting in bad faith as Egypt was during that war.

This means that Israeli fears of American spy ships and ensuing scandal were well-founded, even if their response was as dumb as the Holocaust.

Muslims have a powerful pro-Muslim lobby in America as well. China has heavily invested in American politics as well.

This leads to international wars occurring within our political system, including the fear of opposition to Israel and Jews which causes a defensive reaction:

Again, the resolution faced strong opposition for fear of anti-Semitism. “When the resolution came before the subcommittee, the leadership recommended rejection, saying the fringe groups would use the resolution to shape Mideast policy,” Lockwood says. “We’re not an anti-Semitic group; we’re not a fringe group. We were a group of servicemen that were wronged on the high seas.”

This means that, ironically, those who are anti-Israel are driving the political system away from something like truth on this issue as much as those who are pro-Israel.

A realist might simply comment that something like this was to be expected. When you spy on people, even your allies, they sometimes resent this and act illogically. When your political system is hopelessly divided, actual factual analysis becomes anathema and subverted by symbolic needs. When you are diverse, people have multiple loyalties and fight it out over that issue as well.

We should take these lessons to heart and end diversity. Anything else is an insult to the lives lost on the U.S.S. Liberty, in the Holocaust, and in the Israeli defense against constant Islamic terrorism and threat of invasion.