Reddit Confirms That Recent Bans Were Ideological In Nature, Not For Misbehavior 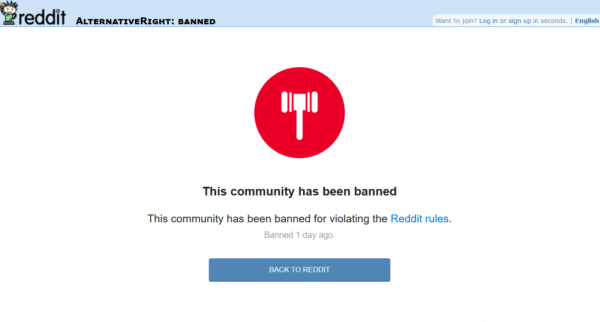 And there you have it, folks: for years Reddit has claimed that its bans of various non-Leftist groups were prompted by misbehavior of those groups. It turns out that this is not true at all. The proof can be found in the fact that along with /r/altright, Reddit also banned /r/AlternativeRight, a much smaller group which did not share the same traffic as the other group.

This means that instead of their claim that /r/altright was banned because it was engaged in “doxxing,” or revealing information about users — in this case, not about a Reddit user but an Antifa who sucker-punched Richard Spencer via crowd-funded research group WeSearchr — Reddit actually banned these groups for political reasons.

That means that Reddit’s actions are straight-up censorship, and nothing else. As public spaces have moved from the real world to the virtual, many areas of important public discussion, like /r/altright, are owned by private companies. Users have no rights here and these companies, feeling their power slipping, are turning to censorship to enforce the narrative that they feel makes them relevant.

At this point, the only solution for anyone who is not a crazy Leftist Antifa is to find healthier places to be, such as free speech social media.