Conservatives thought diversity meant co-existing with others. Now they see it as a permanent need for subsidy, and are realizing the diversity may be a cause of perpetual conflict, with the majority being destroyed so its wealth can be redistributed to the minority who feel victimized.

When I first got my start writing in politics, a wise older editor took me aside and said something along these lines: “Write what you want, but stay away from hand grenade issues like race and class.”

The reason these are hand grenade issues is that when they come up, the scene resembles one of the old cartoons where a character lights a stick of dynamite and tosses it to another. Every person in the room keeps trying to pass the stick to someone else. At some point the fuse burns down, and everyone gets blasted.

However, like any important facet of reality that gets swept under the rug, eventually we need to confront it and find a way to either defuse the bomb, or chuck it overboard from the ship of life.

Not all people from the above categories belong to these rough divisions, but statistically, these are more accurate. Most African-Americans vote Democratic, as do most immigrants from non-European countries excepting northern Asians. Most middle class suburban Americans fit the profile above, although surely there are exceptions. 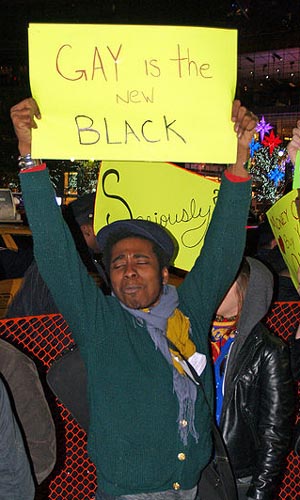 What’s interesting about these groups is that they are nascent ideologies. The first group roughly fits under the conservative banner, but found the conservative parties in power were not helpful enough. The second group roughly fits under the liberal banner because liberalism contains the idea of people uniting to change the way society works regarding inequality. That is the primary liberal issue, and it touches members of those groups the most.

For this reason, any American political issue is going to be bound up with the issue of race. Nativist Americans of the Western European stock who founded this country tend toward being conservative, middle class and Tea Party-ish; newer populations and re-enfranchised populations tend to oppose that majority. To spell it out: the Tea Party are the people who were once the majority in this country, and they’re fighting against demographic change in order to preserve their lifestyle.

This causes the left to use the same canard they’ve been using since the Civil War, which is to claim the majority is “racist” because it hasn’t worked hard to specifically include those who oppose it and hope to demographically replace it. To use this rhetoric, liberals construe race as a subset of class warfare, where the haves (American Nativists, middle classes, conservatives) are somehow denying the have-nots (minorities, immigrants, women, gays and people who feel they are victimized).

From the conservative view of course this is insanity. Conservatives see the ideal not as a government reaching out to people, but a level playing field, and the best getting ahead. Their type of “freedom” also includes the ability to associate and live around those you want to live around, and (listen closely, left) they do not see this as racist. To their mindset, if the playing field is level, black people have as good a shot as anyone else, and there’s nothing to be gained and no harm done by not letting them in the neighborhood. After all, they’ve probably built their own by now and are happy there. We’re doing our boring, white, suburban, conservative, churchy, probably-don’t-use-chile-peppers-much happy lifestyle here.

This is why we can get this radical split:

In a new Washington Post-ABC News poll, most Americans see the movement as motivated by distrust of government, opposition to the policies of Obama and the Democratic Party, and broad concern about the economy. But nearly three in 10 see racial prejudice as underlying the tea party.

“I think there is an element of fear that ‘our white country’ is now being run by a black man. There is a sense that 1950s America is gone,” said Herb Neumann, a white Democrat from Tulsa. “There’s a sense of loss. I grew up in the 1950s, and I don’t think that moving on is a bad thing.” – Tea party groups are battling accusations of racism, The Houston Chronicle, May 5, 2010

To the left, anyone who does not extend a helping hand is racist.

To the right, the ability to live in 1950s-style white conservative suburbs is a right, and their support for diversity was predicated on their belief that they could continue to do this.

Now that they’re seeing that “diversity” has gone from “tolerate others living in our country” to “every subdivision must be diverse, speech codes must be enforced, and those who do not obey are called racists,” the white majority is fighting back.

Their message is simple: we want to change the laws so we can get the Nanny State off our back and continue to live as we have been, without having to subsidize others.

Liberals will never understand this, but in conservative ideology, you don’t subsidize other people — in part because it’s condescending, but in part because it ruins the work ethic of your nation. That’s what all the rambling about “socialism” is about: we want to preserve our values, including work ethic.

They don’t want their kids being taught that Jimmy has two daddies; that’s not their value system. They don’t want diversity training. They’ll teach their kids that black folk have souls and you need to treat them like you treat your white neighbors. But they want to continue living in their essentially 1950s styles neighborhoods.

Underneath that, there’s also a sickening revelation: in diversity, some group must be the oppressive majority and another group the oppressed minority. This is the narrative of diversity, or the story that fits with that dogma. Naturally, if the oppressor doesn’t want to give to the oppressed, the oppressor is really bad. Racist, even.

The Tea Party wants to undo this, and gets called racist for their trouble. This will lead to the next stage, which is people ruminating on these words and others like them:

“Diversity” is a difficulty to be overcome, not an advantage to be sought. True, America does a better job than most at accommodating a diverse population. We also do a better job at curing cancer and containing pollution. But no one goes around mindlessly exclaiming: “Cancer is a strength!” “Pollution is our greatest asset!” – AT THE END OF THE DAY, DIVERSITY HAS JUMPED THE SHARK, HORRIFICALLY, Ann Coulter, November 18, 2009

Nothing in nature is equal, even though we pretend it is so. Diversity of any kind will involve one group being more prosperous than another, even if it’s Flemings and Walloons who are from the same race. Diversity takes many forms: social classes, race/ethnic, religion, values systems, and even politics.

People are beginning to see that the problem is not the groups in a diverse situation (oppressor and oppressed) but diversity in itself. Demanding diversity causes endless conflict that can only end with the majority being destroyed so its wealth can be redistributed to the angry.

This isn’t limited to America alone. In Europe, the Western European nations cluster together in average IQ, wealth and customs. Southern and Eastern Europe are outliers to that equation. The EQ is currently being threatened by the PIGS (Portugal, Italy, Greece and Spain — essentially all of Southern Europe) going into default, much as it is also threatened by all of Eastern Europe going into default and an increasingly bellicose Russia. That’s in addition to its constant race/religious riots caused by incompatibilities between Muslim and Western cultures.

In diversity, each member of a social group faces a grim choice:

Interestingly, most groups choose the second option because the first option involves them giving up a lot of who they are.

Presumably, after enough interbreeding has occurred, there will be no group and so this problem will go away — but then an even worse problem will exist. Without cultural values to hold us toward a standard of behavior, we ONLY have government intervention to keep us all moving in the same direction. That’s why the Police State we feared in the 1930s has become the Nanny State: a well-intentioned but armed babysitter keeping track of people who have almost nothing in common in terms of their value systems, abilities and goals. Without culture to glue a society together, you get a totalitarian nanny.

For this reason, ethno-nationalism, or the idea that the ethnic group should define the state and not vice-versa, has gained currency. Each group — whether Black Panthers, Walloons, Jews, Muslims, Pagans, Conservatives or Trekkies — wants to be able to live according to its own rules without others interfering. And so they’re thinking about separation. The Tea Parties are just the start.