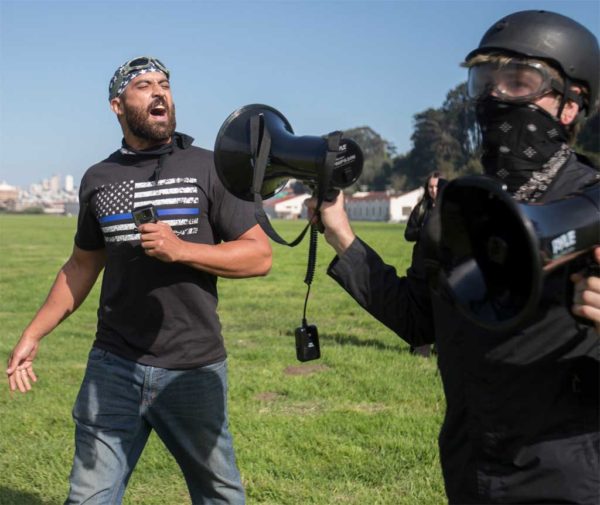 Protesting the establishment may seem like a straightforward proposition, but it proves to be non-intuitive because it takes no specific form because it must mutate constantly in response to changes in the political environment.

The election of Donald trump seemed straightforward in that it was a normal election. Scratching the surface, and the election can be revealed as a protest against globalism, diversity and political correctness, in that people were willing to overlook any reservations about the candidate in order to thwart those movements.

The Left responded with a wave of criminality disguised as protests and a deep state that leaked information and attempted to subvert the president. Looking at this through the lens of strategy, we can see that these acts were not a protest at all, but an attempt to reconquer power through extra-legal means.

At some level, people realize that this election was about social changes and not issues or candidates exclusively. Social media abounds with examples where children are pulled into political arguments against â€œwhitenessâ€ or â€œChristmas,â€ both of which Trump is a de facto example of.

Explaining protest activity to children becomes quickly bizarre because protest takes the form of a political tantrum, and so adults must act like children in the context of issues not designed for consumption by children. And yet we have to tell our children something because they see that we are reacting to something.

This resembles the paradox of adults confronting a child scared of monsters and scary dreams. You cannot tell a child that monsters do not really exist after you have just read them a bedtime story of a monster. When the monster is political, it makes even less sense to disguise events from children, which just makes protest seem even more unreal.

South Africa encountered protest culture recently because the national Minister of Police refused to provide farm murder statistics in the same news cycle in which the farm murders actually took place. This resulted in a nation-wide peaceful protest via blocking highways and dressing in black clothes.

This protest included pre-schoolers also dressed in black. I had to tell my little boy why â€œweâ€ were dressed up in black. So I told him that we are sorry for people who died on the farms. He knows that â€œfarmsâ€ are far away and in his mind it is a distant proposition meaning that he did not need to get scared. From previous â€œtalksâ€ he also knows that â€œcriminalsâ€ exist because that is why we have police (after all). However, the connection between criminals and death has not become realized in his mind yet. But what he does know is that showing empathy for somebody who got hurt is acceptable.

During my talks with this young boy I have come to realize that I can under no circumstances tell him that our neighbor is a criminal. The reason may be surprising, because it is not that he would expect the police to protect us, it is that he expects his own father to do something about it â€“ and not tomorrow, but now.

My son finds it utterly inconceivable that I would not immediately act on the knowledge of my neighborâ€™s criminality. In fact, if he saw me act, he would support me, but if I do not act, he would shrink away with fear. Knowing that I acted would make him stronger while knowing that I failed to act would cause him to potentially suffer from stress his entire life.

In the same way that children intuitively understand stories about monsters, they also know that to fail to challenge monsters is to be defeated by them. It will be many years before he sees that in egalitarian human society, the monsters are seen as victims because they are equal, and so good people find their hands tied.

Therefore it is not a question of what to tell your kids in these dystopian times; it is a question of identifying the threat and acting on it to show success by reducing that threat. There is no way I can tell him that Afrikaners have no authority to reach out to because every structure is the enemy, but he must see me acting or he will grow up scarred by inner terror.

The road to raising a child in these anti-establishment times leads to the necessity of confronting the monster even if it is the majority of our everyday life. Teach your child to act against the monster, including protest where necessary, as a life skill and normalize it. In healthy times, this would not be needed, but we do not live in healthy times.

You will learn from this process simultaneously. Because criminals are taught a life-skill, it is possible to oppose their behavior, even without violence, once you have taken the difficult first step of identifying it and explaining why it is a monster. Since our time is essentially defined by the normalization of criminal intentions through democracy and diversity, the monster must be opposed with protest.

This prepares children for the next step, which is to change our civilization from a dysfunctional to a functional one. Having criminals continuously and increasingly roaming the country-side is unsustainable, just as having an organization that rewards criminality is, and so for the next generation to defeat these monsters, they must prepare now to eventually re-organized or re-make civilization after its fall.