Politics According To Contemporary Heavy Metal Band Monument Of A Memory 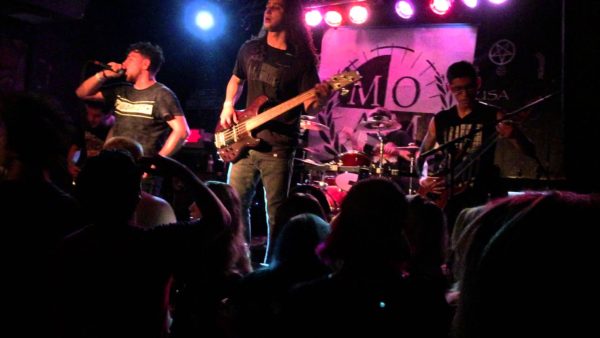 Heavy metal has changed a lot in the last twenty years. Like in the late seventies and early 80s, its mainstream form now merges the formerly underground styles with radio hard rock and other public genres. Along with this style have come some changes in viewpoint, consistent with the millennial generation making this music.

I investigated by interviewing Paramus, NJ band Monument Of A Memory, whose vocalist Tommy Gehringer and bassist Josh Correa gave some insight on how deathcore bands (and millennials) view politics on the eve of Monument Of A Memory releasing their second album, Catharsis.

This is certainly a different question. There is a philosophical difference between both genres. Death metal is more like old school blue collar conservatism, while deathcore is kind of like a left-leaning libertarianism. — Josh

Americans seem to exist like flies caught in a web of conflicting influences. Our society is intensely socially liberal, but kind of conservative on foreign policy, and often quite libertarian — “let the markets decide” — on other issues. Where do you fit in this spectrum?

I like the free market but it canâ€™t be trusted alone or else it will turn into a game of monopoly. I’m a huge fan of big government like Dwight D. Eisenhower or FDR. Big government helped us get out of the great depression and helped create jobs. At one point the top tax bracket was taxed at 90 percent. — Josh

I’m very laissez faire when it comes to foreign policy, but I do not think we should be spending close to half of our budget to police the world. The US spends more on military than the next eight nations combined.

We have to know that most of that spending doesn’t go directly to our men and women in uniform. — Josh

Do you think politics can solve any of our human problems? Related: is there a way that democracy can be functional at all?

Yes, democracy can function for all. What we are seeing in America is not a true democracy. Less than fifty percent of eligible voters show up to vote for presidential elections, and less than forty percent during midterm elections. This is essentially the minority voting for the majority. what makes this worse is that the famous Supreme Court Case Citizens United vs. FEC opened the flood gates to dark money by millionaires and billionaires, effectively saying that money equals speech. — Josh

It feels like we are coming up a historical hiccup where one order fades and another rises. What is fading, and what is rising?

I feel that the era of dark money and establishment politics are both slowly on their way out and two very polarized political parties are about to come in and make moving bills and legislation so much harder than it needs to be. — Josh

Is our civilization in decline? If so, for how long has it been doing this, and what do you think the cause was?

Thatâ€™s a tough question because Iâ€™m kind of in the middle on this one. We as people have totally become more self-entitled as well as incredibly violent, and it shows on Facebook with all of these viral videos of autistic kids getting beat up, terrorist attacks, and this ongoing fight for equal rights for all humans that should have been given at from birth. Iâ€™m not sure how much lower we can get as a society given the spectrum of attitudes and mindsets. At the same time, we are advancing so quickly with technology and these crazy innovations. We have some unbelievably intelligent people making discoveries every day, and it is hard to say if we are declining or moving forward. I feel like there is also a huge amount of people who have such different views as well that no matter what, they will always knock heads and fight, which is a very sad thing. From my perspective, civilization is just walking up the down escalator. — Tommy

Thanks to Daniella Kohan at Dewar PR for hooking up this interview!