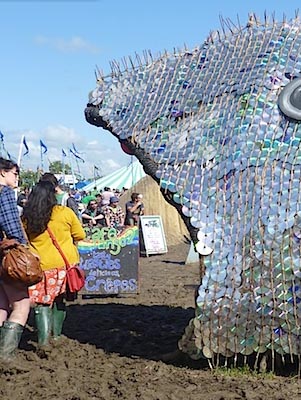 If you are lucky in politics, your idea is popular but not too popular.

If you’re not too popular, you can make the news and fight as an underdog, and after a long time, come into power. By then, you’ve shaped your idea clearly and strongly.

If you are too popular, your idea becomes a trend. That means that it is taken out of your hands, turned into a fashion statement and a mania, and the crowd runs off with it as crowds of simians tend to do. They become willfully oblivious to its original intent, replacing it with their own need for excitement.

Monkeys. It’s hard to be descended from them, and to know that when we let up for just a minute, nature peels back the fancy wrapper and out comes a flea-infested, feces-flinging, easily-distracted monkey.

A too-popular idea right now is environmentalism, or greenism, as people call it. Environmentalism is the idea that we can cut back on our lifestyles instead of cutting back on our growth. The purported goal is to save the environment; it looks to me like the actual goal is social esteem.

CDs first became available in 1982, and since then so many of them have been thrown away that designers Tabitha Pope and Jenny Hall of Recycled Venues had no trouble finding enough discs to use as shimmering scales for this giant recycled fish. The fish was displayed at the UK’s Glastonbury Festival and was an instant hit – even Prince Charles stopped by to get a peek at it!

Like on the crazy CD dune featured here previously, the fish â€œscalesâ€ shimmered during the day and glowed at night, creating a fun and inspiring shelter from the notoriously soggy English weather. – Inhabitat

This is from a blog whose tagline is “Green design will save the world.”

Yet there’s no world-saving going on here. There’s “consciousness-raising,” sure, but that has already been done.

More likely, what’s happening is trend-jumping in which every human gets to be a big cheese for a few days and then all is forgotten.

This isn’t about saving the world. And those CDs still have to be shipping to China for recycling.