Pledge allegiance to nothing 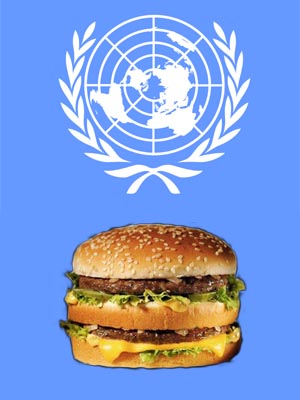 Fifty years ago, when we saluted our national flag, it was honor and pride that made us do it. We have forgotten that time, and replaced our healthier symbols with symbols of our self-destruction.

At the very least, back then people had souls, which a minority of us do today. People follow mass media and whatever their politicians tell them, backed by a steady flow of dollars from large corporations who pander to the soulless people and their empty “needs.” It’s a giant circle: a dying culture investing in itself based on its own estimation of its worth.

The world as a whole — sadly, not limited to one specific state — has undertaken this phenomenal destruction. Across the globe, we have replaced symbols of nationality, spirituality and values with those of commerce, socialization and personal drama. Today we see Twilight as more important than Homer because the sales figures are most important. We replace Mozart or Wagner with Lady Gaga and Justin Beiber.

We are transforming human civilization into a vast international shopping mall. Why try to make superior cuisine when you can make a McDonald’s burger that satisfies most of the people most of the time? Instead of aiming ourselves upward, we are pandering to the lowest common denominator among our people.

It’s very funny to see how ancient people were muscular, intelligent and heroic and today we are dumb, obese and cowardly. This sad to a depressing level. Mainstream culture offers no support for heroic behavior or anything other than personal gratification. For a society of people who are chasing their dreams, we sure act like a bunch of depressed and alienated outcasts caught in cognitive dissonance, compensating by bragging about all the cool stuff they do.

The phenomena called “globalism” is cultural degradation and suicide. That is why it is evidently pointless today to salute a flag representing a dying society. If you salute that flag, you are actually saluting a tragedy in progress. To make that flag meaningful again, you must fix your nations and cultures so you can salute something you are proud of.

Maybe this is why we started in the 1920s really letting go of the past. Our symbols of it had become meaningless and nothing new was coming down the pipe to replace it, so “apres moi le deluge!” — let the masses take over. Acidly we endorsed the supposition that maybe the proles of the world had magical knowledge we did not, and they would find profundity where we found only bitterness and decay.

As the events of this century have revealed, evidently not. Do you remember Rome? Degeneracy led to a tragic end. Barbarian Goths who knew nothing except superstition destroyed the educated, wealthy, and powerful Rome. Sounds familiar?

Bring back our heroes and push away blood sucking evil of globalism. Return to the empires your forefathers built, not this plastic imitation that pleases the crowd and murders anything more intelligent than a television. Pledging allegiance to a dying civilization is self-deception.