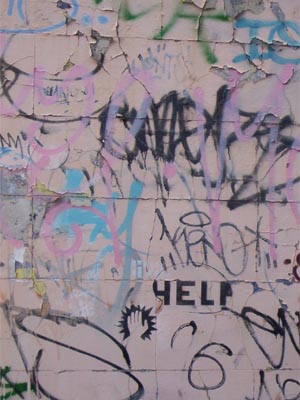 It’s a trap, like the “tar baby” (human figure made out of tar) of old fairytales: the more you punch it, the more it sticks to you. Soon you’re punching the air, and have become imprisoned in tar.

This blog has extensively criticized the right-wing for interpreting rightism as hatred. In fact, the far right is not hatred — it is not love, either. It is not sentiment at all. It is this sequence of ideas:

This is not love; it is not hatred. It is adaptation to reality, a strategy designed to produce rewards that are more than material. In fact, the right-wing is the anti-materialist discipline: we believe the ends are more important than the means, and money is a means.

The left on the other hand endorses narcissism, passive-aggression and self-aggrandizement as morally good. It does this by banding together all the narcissists, and having them set up absolute rules that reward parasitism and inertia, so the narcissists can keep doing whatever they want.

Think about a leftist government. It is good at banning things, but terrible at motivating people to actually do good things. It is entirely focused on the negative. What’s left over? Inertia: people doing whatever they want. And now they’ve made themselves impossible to criticize.

Our society chokes in self-hatred. Shiny on the surface, it is a raging cave of hatred within. Our manic insistence on equality means that we must tolerate everyone, which means massive socialized costs through bad behavior, and the consequences of having no culture or values system that rewards good.

Were the Nazis full of hatred? Not at first, one thinks, but then they discovered how easy it was to blame the Jews and Freemasons, homosexuals and dissidents. This united people. They formed a lynch mob of their own, and went after these people. What got forgotten? The urge to create a new empire.

Our society hates because it is a cauldron of frustration. We obligate ourselves to do so much that is unnecessary, and never reject many of the seemingly inoffensive things that produce bad results, and then we hate ourselves. The West — the Caucasians — hate themselves the most.

And maybe they should, since in the years after 1789 they have taken all of their creative energy and turned it into hatred. Hatred of kings, of corporations, of natural selection (inequality) and of anyone who might rise above the Crowd.

Leftists are the biggest haters of all. Their hatred is disguised, which makes it enrage the haters because they cannot express a single thing honestly. They have no desire to create. Instead they have a desire to pull down the higher, smash the beautiful, and make everything uniform.

What’s left after that? Nothing but commerce and egodrama.

Hatred will swallow you up. It will make you focus on what you hate, not what you love. Leftists hate inequality, so they focus on that, and in the process, not only forget how to create, but how to enjoy life. Drinking expensive wines and smoking trendy elite marijuana doesn’t do it.

The future of life is not in radical emotion, no matter how popular it seems. The future is in a single emotion, which is a enduring and pervasive sense of well-being and appreciation for the universe, rooted in the idea of creating beauty and order wherever we go.

Until we get back to that vision, our future is a dark tunnel of hatred leading to a mirror that shows us as we are: small, pale, acidic and alone.

Parasitism | Pledge allegiance to nothing