In this article on the “in progress” nature of feminism, I found a revealing constituent:

My generation — WOMEN — thought the movement would advance on two legs. With one, we’d kick down the doors closed to us. With the other, we’d walk through, changing society for men and women.

It turned out that it was easier to kick down the doors than to change society. It was easier to fit into traditional male life patterns than to change those patterns. We’ve had more luck winning the equal right to 70-hour weeks than we’ve had selling the equal value of care-giving. We have yet to solve the problem raised at the outset: Who will take care of the family?

As a young mother and reporter, it did not occur to me that my daughter would face the same conflicts of work and family. Or, on the other hand, that my son-in-law would fully share those conflicts. I did not expect that over two-thirds of mothers would be in the work force before we had enough child care or sick pay. 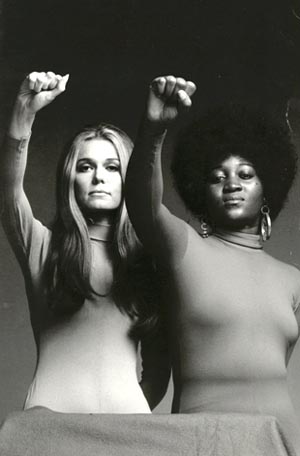 It’s easy to kick down doors and start revolutions. All you need to know is what you hate.

Well, see, the thing you hated was only a manifestation of (a) a necessity created by the many demands of reality and (b) a method replying to it. You shot the messenger, and the underlying needs and problems remain.

Those were heady, thoughtless, stupid days, and many a conventional marriage broke up as women took upon themselves the freedom they imagined men enjoyed, while many a professional man became enamored of hippies and New Age escapism, changing spouses accordingly. I knew this cohort well, and almost every one of the feminists I then knew and promoted on my radio programs and elsewhere either had a red family of origin or newly attached herself to some fraction of the left, whether it be Marxist-feminism or New Left feminism, which was odd, because â€œpatriarchyâ€ (the social division that is primary to a feminist) is an ahistoric notion and couldnâ€™t be farther from the complex historical analysis that a proper Marxist (or non-Marxist historian) should exemplify. But rules were laid down by the new dominatrices, and compliant guilty males and ambitious females acquiesced, with nary a murmur or moral qualm. And part of this explosion of P.C. animosity took the form of exposing the inadequacies of their ex-husbands or lovers, naming names, the more famous the better.

Role-reversal was a losing strategy, not to speak of its intrinsic immorality in a movement that appealed to â€œequality.â€ The Battle of the Sexes has not been terminated; rather, new wine has been poured into old bottles. Escapist â€œmagicâ€ makes money as the Boomer generation swells the prospective movie and television audience, and Daphne Merkin struggles with â€œchronic depressionâ€ that she appears not to understand (see an earlier NYT article in which she darkly exhibits her mental states).

The second-wave feminists (a few of them) are now installed in academe and related venues, though their youth has fled, while the masses of women continue to struggle with the same issues that beset them before the 60s-70s feminists made the scene: e.g. women are terrified of aging for good reason. Here is just one example: Discarded women who loved their ex-husbands may continue to feel protective toward them, finally discovering that their concern was never reciprocated in a similar lifelong commitment. And to add to the insult, the older woman may find that she is expected to dress herself as if she were an anorexic adolescent girl.

In the case of women’s “equality,” as the author above found out, that’s an equal right to a 70-hour work week — and still someone must raise the children and keep the house in order. Even if you hire maids, day care and a psychologist, much of this labor remains. And unless your career is ahead of his, it’s going to fall on you. In addition, you’re now spending more money to have a second car, commute, pay those service workers, and so on. Did you really come out ahead?

Feminism is one of a thousand examples of this kind of thinking we could find in our modern world. People see a messenger that has something they don’t have; they kill messenger; then they find out that there were reasons why things were the way they were.

The author suggests that approximately 4 percent of the population suffers from Antisocial Personality Disorder, which she refers to as the “condition of missing conscience” and alternatively as “Sociopathy”.

Dr. Stout begins by asking the reader to imagine a world where they have no conscience thereby freeing them from, among other downers, guilt, shame, remorse and concern for others. She then asks the reader to imagine, if they were able to conceal this psychological flaw from others, how they might live. They would, after all, be free to seek all the power, money and influence they desired, in the quickest, crudest and most ruthless way without the nagging burden of doing what is right. Or, maybe, Dr. Stout says, you are not ambitious, but seek only to relax and live as carefree as possible from the goodwill of others. Without conscience, you would be free from the guilt and shame that traditionally comes from being a freeloader.

The world Dr. Stout is asking the reader to imagine is the world of a Sociopath. This is not Hollywood’s version of a Sociopath, the social recluse with the transparently frightening demeanor, but a real snake in the grass. It is your beautiful and tormented best friend, your overworked and stressed out spouse or your down on her luck mother. Dr. Stout upends the reader’s notion of a Sociopath; warning that the real tell tale sign is not fear but pity. She states, “The most reliable sign, the most universal behavior of unscrupulous people is not directed, as one might imagine, at our fearfulness. It is, perversely, an appeal to our sympathy.”

The pity play or attempt to appeal to the sympathy of others was also addressed in research conducted by the Minnesota Department of Corrections and The Hazelden Foundation (2002). There, researchers concluded that criminal thinkers most often attempt to control others by portraying themselves as a victim, turning to fear tactics only when the victim stance fails to get them what they want.

The culture of pity — by which we consider each of us potentially unfortunate, a victim of life, and constantly look for victims and victimizers as the narrative of life — could be based on a kind of politically-savvy compassion. When we see another person, we can mimick their emotions, which makes them trust us as if we were extensions of themselves — much as a virus sidles up to a cell, merges with its walls, and then injects its hidden commands.

Mimicry facilitates the ability to understand what other people are feeling. The present research investigated whether this is also true when the expressions that are being mimicked do not reflect the other person’s true emotions. In interactions, targets either lied or told the truth, while observers mimicked or did not mimic the targets’ facial and behavioral movements. Detection of deception was measured directly by observers’ judgments of the extent to which they thought the targets were telling the truth and indirectly by observers’ assessment of targets’ emotions. The results demonstrated that nonmimickers were more accurate than mimickers in their estimations of targets’ truthfulness and of targets’ experienced emotions. The results contradict the view that mimicry facilitates the understanding of people’s felt emotions. In the case of deceptive messages, mimicry hinders this emotional understanding.

Could feminism have been a criminal enterprise? Consider:

I’m not suggesting a conspiracy here; I just want you to hold on to this thought:

Someone did benefit, and it wasn’t the people who embarked on the great feminist delusion.

Someone gained power outside of a working political system, destroying lives and accumulated knowledge, and now that the door’s kicked in, things aren’t turning out as well as they thought.

You know, we had those revolutions in 1917 and 1789 in Russia and France — which one of those produced a paradise?

And 1968, the year when feminism, gay power, black power, equality and marijuana triumphed — did that make a paradise?

Surely the answer must be that we are controlled by a vicious Satan who keeps us from realizing our grand liberal dream!

Or more likely, that new generations — having none of the experience of the old, and having parents too afraid to talk about politically sensitive subjects — stumble into the same illusions and then must serve under them until when older and surlier, they can point out how their lives were wasted.

But liberalism — of which feminism, class and racial revenge movements, welfare states and subsidy politics are a subset — just sounds good because it appeals to pity. You are the victim. And now you will want to find other victims, and band together, like a mob in the street throwing rocks.

Surely this ancient simian behavior will lead us to enlightenment.

More American New Right | Conflict Avoidance And How To Avoid It