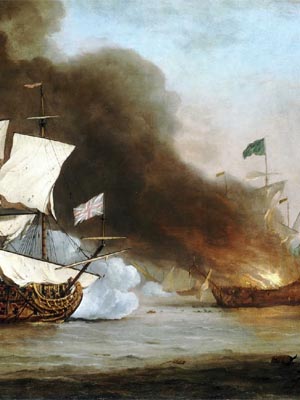 Pirates are interesting people. Interesting in the way they live, not inasmuch as you would actually want to meet them. Unless, of course, you were a pirate too. Even then, you might be less than enthusiastic. For pirates are dangerous. Not because they are particularly strong, but because they operate by no civilized code of conduct.

Pirates produce nothing. They do not seek employment. They do not contribute to society.
Instead, they feel it is their right to plunder it, and from it, to the carrying capacity of their ability to do so.

There is no end-point to piracy. At no point does a pirate cease being a pirate. Whether or not his physical acts of piracy continue, he will always remain a pirate.

Civilization, when it ran into these pirates, armed itself against them, and for a while, this deterrent was effective. But pirates have always been wily beasts, and they always manage to specialize in countering counters.
Civilization was willing to accept some wastage. After all, there was The New World to plunder, and in a way, civilization had something in common with the pirates. There was plenty to go around.

The problem with pirates is their very success. And having enjoyed that success, to want ever more of it. Others, unhappy with their lot within civilization, and impressed by the pirates’ success, defected to their civilization’s enemies. Thus there were ever more pirates. At some point, critical mass occurred, and civilization decided it really had to do something about it.

From then on, national navies relentlessly pursued and destroyed the pirates, finally eradicating them altogether.
At least, for quite a while. The seas remained pirate-free for many years, and only recently do we see a resurgence of this troublesome phenomenon.

So:
A pirate is one who does not contribute, but merely plunders.
He follows no established code of behaviour.
He has no loyalty to anyone or anything.
He does everything he does, for his own gain, whatever the cost to others.
He is unable to stop himself, or retire from his chosen profession.
He is a danger to one and all.

We no longer call members of our own ailing civilization ‘pirates’ – after all, we are all equal – although it is quite clear that such pirates do, in fact, exist.
They not only exist, but they do so in ever increasing numbers.
Again: at some point, critical mass will be achieved, and war will be declared.
This is the natural way of things, and there is no circumventing it.
The results are predictable: and may go one of two ways.
Civilization will react in time to the danger, or it will not.
If it does, then the pirates will be eliminated, again, for a long time.
If it does not, the pirates will eliminate themselves (after first eliminating their civilization), since they produce nothing, and the plundered loot will only last for so long.

Pirates. No good ever came of them. No good ever will.
Their weapons may have changed somewhat, over the years:
From pistol and dirk, cutlass and rapier, to hypocritical rhetoric, buzz-words and manufactured guilt.
Then back again to RPGs and AK47s.
They are still pirates. Their ethos makes them so.
When you hear of people who may, or may not be poor, demanding riches from those who may, or may not be rich, then pause and consider:
Who, exactly, are these people?
Why, exactly, should their demands be accepted?
What, exactly, do they contribute to civilization?