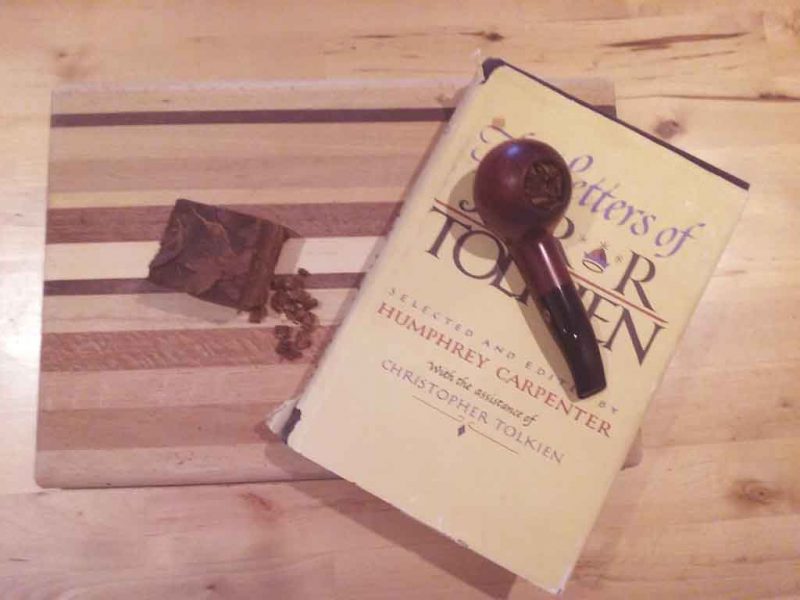 This little pipe has become a favorite because it has a wide bowl and radiates heat to the briar, resulting in a sweeter smoke of almost any blend which lends itself to glacial breath-smoking. Normally a bowl lasts about two hours.

For today, the bowl will probably last closer to three hours because it is filled with cube-cut Jackknife Plug, a G.L. Pease creation that was on sale a year ago so I picked up a few tins. It tries to create an American version of the classic English plug.

Plugs come about when someone heaps tobacco leaves together, soaks them with a topping, and then crushes them for a week in a twenty-ton press. The old school English plugs used a steam press which applied more pressure, probably more like two hundred tons, at the same time it stoved the leaf with steam.

This melted them together into something more like a chocolate bar than the heap of crushed leaves that comprises this particular plug, and the English approach brings out the most intense form of tobacco: soaked in honey and maybe a little vinegar, lemon juice, or geranium oil, the leaves blend together as their oils are released and the individual cells are crushed, forming something more like goo shaped into a leaf than a distinct entity.

That allows ammonia to boil off and sugars to ferment, making a sweeter pre-caramelized smoke that also packs quite a bit of leaf into each puff, making it stronger as well. Like tobacco twisted into ropes or fermented into Perique or cigar leaf, the change in pH, oil, and sugars also allows the body to absorb more of the life-sustaining nicotine.

Jackknife Plug consists of interspersed red Virginia and dark fired Kentucky Burley leaf wrapped around a core of bright Virginia, which has a sweet and bready flavor in contrast to the more honey-like red Virginia and spicy, sooty mess of the dark fired. If anything, the dark fired is too prevalent here; in the English plugs, they seem to treat it beforehand, possibly just hosing it down, and in so doing they lose the gritty, dusty character of the smoke. They do the same with their Latakias in the best English blends, whether they are consciously aware of it or not, and it contributes a greater smoothness.

American blends generally are considered more rough because usually, they are simply recipes. A certain amount of Burley, some Virginias, and Orientals, dark fired, Latakia, and Perique used as condiments, and you have your end result. The English tend to physically interact with the leaf more and manage its acidity and moisture, resulting in smoother, often far more powerful blends.

With all that in mind, this blend stands on its own. Dry, it burns well, thanks in part to the Burley which owing to the lower sugar content of its cultivar smolders at a slightly faster pace, and the Virginias cook together and form a pleasant sweet background that the nuttier, woody Burley flavor expands with the smoked leaf — dark fired is cured by smoke, not open air like the Virginias — and forms a barbecue-like tangy smokiness. The synergy of the different parts makes each one stronger.

History is the same way. A trend in one area influences another, and they potentiate each other, resulting in a tsunami of change. We are coming to the end of the consumer era at the same time we are coming to the end of the democratic era. Changes were made, and they resulted in vast destruction, especially to the family and genetics; pollution accumulated as the number of humans piled up, and the voters slept right through it; all of the products which made us more efficient or powerful have run their course, so the days of high margins and easy sales are over. Humanity needs to find a new cause and a new way of life.

We are seeing that already in this part of the world. The people with the most clue are marrying young, avoiding college and graduate school, moving to the country, setting up homesteads, owning their own businesses, and doing most of their work off the books so they can avoid paying the taxman who funds the endless underclass entitlement project and swelling bureaucracy that is little more than a jobs program for the obese and clueless. Those who have no direction in life remain in the cities, single and uncertain, dedicated to jobs that are neither important nor will ever reward them what they put into them. In their remaining few hours of solitude, they try to lull away the pain with expensive wines, shopping sprees, and flings, but none are really worth the effort required.

Nature will cure this disaster. In twenty years, the people in the cities will be short, tan, squat, and dumb. The countryside will be a closed book to them. Politics will resemble those of Mexico, where a few rich people fight over who gets to steal from the public coffer next, but those coffers will run thin. At that point, countries disintegrate and fragment into little tribes. These groups will be religious, ethnic, cultural, and racial in nature; each will be formed of an overlap between those categories, following the WASP (Western European/Anglo-Saxon Protestant) model.

This is quite something to think about when smoking a pipe on the porch. Everything that we have known as “normal” turns out to have been a brief pocket of history, a momentary distraction afforded by the rise of technology at a time of political upheaval, and now we are seeing that those changes did not work well and we are transitioning to something more resilient. We have lost faith in the idea that we can improve on nature, rejecting the notion whose birth in the Enlightenment™ was aided by our automatic washing machines, laser surgeries, satellite television, cellular phones, air conditioning, and automobiles. Instead of seeing ourselves as the order, we are seeing ourselves as part of an order again.

It would make no sense to say that Jackknife Plug “is” Virginia tobaccos, although it contains them. Nor would “plug” be enough to describe it. It is a synergy and synthesis of all of those things, such that none of them speaks for the whole, but the whole gives each one more power than it would have had alone. That is the futurism that is joining with our new traditionalism; we are aiming to go within the structure of objects and evens, and to maximize power by having the parts work together more effectively, instead of counting on one big technique like a power drill to force things to work.

All being said, we live in interesting times, and they are about to get more interesting. Economies based on consumerism do not convert overnight; this is why people are homesteading. A big crash is coming soon once people realize that the actual margins on products are about to be much narrow than they think.

Nations are racing to become self-sufficient before the others; whoever makes everything they need and then has some extra will win and everyone else is going back to the primitive subsistence times. Religion is coming back, more in a sense of observations about nature than supernatural symbolism in a book, any book. The values of the standalone self-sufficient human are coming back too, like aggression, honor, sanity, virtue, decency, kindness, and wisdom.

It is interesting how much 1980s nostalgia is in the air. That was a simpler time, but the rot revealed itself clearly and was easy to navigate around, despite being the last real change in our society that simply continues in threads today. Everything has fallen since then, and we are realizing that the time before it was marked by profound changes that turn out to be mistakes. The new way does not work as well as the old, but we need one that works better than either.

It will probably resemble a fusion of Frank Herbert, J.R.R. Tolkien, and Robert Heinlein: a world without humanity unity, where truth is relative to how much you trust the speaker, and in which self-interest is accepted as the only honest approach. This will be an age to have a good gun and axe, and to spend your time on creation and nurturing of gardens, families, cultures, wisdom, and nations. The fetus age of focus on the self is over.

Things to think about as one incubates a smoldering flame within briar as the light of day matures. Soon today will be ending, and then a long night will come, followed by a new day. There may even be more of this tasty blend there as well.