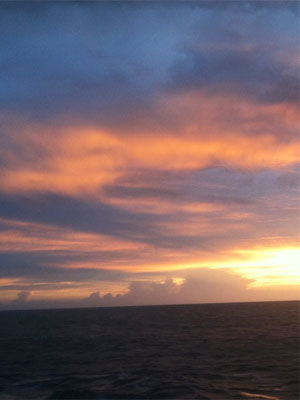 Emotion is a powerful aspect of the human mind — There’s no denying it.

It’s a very necessary force that should never be ignored, but understood in the context of healthy, rational thought. A lot of issues that people have with emotion often involve an inability to understand why it is felt or whether or not they should feel that way.

Guilt is one such terribly-powerful feeling:

In the first empirical work to examine both stated intentions and actual behavior, researchers argue that this sort of negative message — evoking both fear and guilt — is a far more effective deterrent to potentially harmful behavior than positive hopeful or feel-good messages.

“Making people feel good is less important than making people feel accountable when it comes to making wise decisions about self-protection,” explain Kirsten A. Passyn (Salisbury University) and Mita Sujan (Tulane University) in the March 2006 issue of the Journal of Consumer Research. “Our work separates intentions from implementation and clarifies the role of emotions in this process.”

However, getting people to actually follow through on these intentions and change their behavior requires appeals combining fear and an emotion high in self-accountability, such as regret, guilt or challenge.

“[This research] suggests a new emotion-based approach to encouraging a wide range of health protection behaviors,” say Passyn and Sujan. “We illustrate the critical role of emotions in persuasion, especially for translating tendencies into action.” – ScienceDaily

That’s all fine and good.

The idea is that guilt is an anti-incentive of a sort, where your mental “at-peaceness” is basically held hostage by Guilt until you do something — anything — to appease it.

However, what happens when the monkeys don’t feel the blame by themselves; when they see Guilt as the penultimate reincarnation of Satan + Hitler, and themselves as the victim?

…and how do they avoid its tolls and the call to responsibility Guilt urgently asks of them?

Here’s some ideas on how to avoid Guilt, in the ever-popular list form:

It’s a disease of the moderns. Most of these items appear together in a person trying to beg and appease Guilt in a dishonest manner, and it’s totally obvious to people who are totally reconciled with their Guilt and their other emotions.

The ingenious and the manipulative can leverage one’s Guilt to their advantage, and at one’s expense. The recent “Go Green” phenomenon of the last decade can be attributed to simple Guilt, and a failure of the masses to examine why Guilt is being felt — it’s simply being acted upon so that it can go away.

Shifting the blame is probably the most effective and most common method at dishonestly appeasing Guilt. When you can shrug your shoulders and say “it wasn’t me,” you can avoid responsibility…

“I couldn’t get a job and pay my bills because of this economy”; “The dog peed on the carpet, I swear!”; “Someone else will clean up that trash I just knocked over.”

…you can avoid responsibility for the time being, at least, by passing on the blame.

Pass it on as much as you want, Guilt will always find a reason to come back and collect what you owe, since Guilt doesn’t take BS from anybody.

Unless you’re totally adept at lying to yourself, you’ll never avoid the conflict in your head, so you’ve got to reconcile it in the world around you by taking charge and solving the REAL issue. Guilt is here to make sure we rectify our behavior.

Why not do that instead of closing the blinds and yelling “I’m in the shower!” when Guilt comes a-knocking? It’s only a matter of time before Guilt gets pissed and finds a way in through the window and chases you upstairs into the bedroom, where you meet your bloody end.

It’s much easier to do it the other way: the normal way. By not passing it on, accepting the blame, and paying what you owe. Emotion and external reality finally become parallel, and you gain a clear conscience.

You may see Guilt as an enemy, but when Guilt is circumvented, bad things happen in Realityland. When Guilt is properly appeased, things become well again.

Don’t misunderstand the intent of this emotion. Don’t let others take advantage of your Guilt. Guilt really loves you, and whether you see that or not is entirely up to you.