When you wake up to this planet, you realise one thing sticking out the side of people’s heads; their thoughts are not their own but are subservient toward a domesticating agent, a memetic Brainslug.

We can coalesce many ill thought out ideologies with little substance and stereotype them as Crowdism. Crowdism contains memes such as but not limited to; liberalism, egalitarianism, democracy, socialism, communism and greenism. 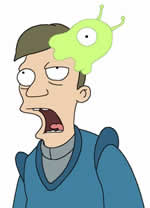 What unifies these revolting ideologies is that they do not benefit the individual although they claim to be doing so, they are a Brainslug that prefers its own survival over yours individually, because it manipulates you into believing passive lies.

Brainslug owns the population, the majority do not think for themselves and have this parasite wedged into their skull awaiting big daddy Technium to erupt from the Hivemind – or in terms the above average human should understand, ecocide and death, whatever prevails after that is not concerned with the ecology as we know it, if anything.

The rules of the game are simple;

Now on a more serious note, for those who have removed their Brainslug, here is the introduction to a text which covers much ground on the psychology of Crowdism;

IN its ordinary sense the word “crowd” means a gathering of individuals of whatever nationality, profession, or sex, and whatever be the chances that have brought them together. From the psychological point of view the expression “crowd” assumes quite a different signification. Under certain given circumstances, and only under those circumstances, an agglomeration of men presents new characteristics very different from those of the individuals composing it. The sentiments and ideas of all the persons in the gathering take one and the same direction, and their conscious personality vanishes. A collective mind is formed, doubtless transitory, but presenting very clearly defined characteristics. The gathering has thus become what, in the absence of a better expression, I will call an organised crowd, or, if the term is considered preferable, a psychological crowd. It forms a single being, and is subjected to the law of the mental unity of crowds.

Le Bon, Gustave. The Crowd: A Study of the Popular Mind

Pakistan floods, a self inflated natural disaster | What’s so hard about self-interest?