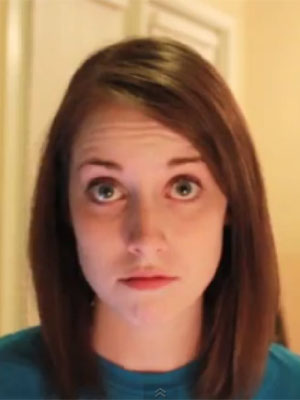 The internet meme “Overly Attached Girlfriend” (OAG) ridicules one of the artifacts of modern dating, which is that it creates conditions so desperate that people become obsessive. We find it easy to write them off as crazy because it is easier than noticing the whole process is crazy and that, by extension, we’re most likely doomed.

OAG reveals a more fundamental truth of humanity however, which is how we become obsessively joined. This can happen between individuals, or in groups. It has two components: that which wants to join destroys something that you need, and then replaces it with itself.

In the case of modern society, what is destroyed is your concept of self-worth. This takes several steps.

First: Someone makes language that tells you what is “good” and “bad,” and carefully excludes everything else by making bad into “not-good” as opposed to “the opposite of good.” My way or the highway.

Second: Someone begins doling out praise to those who are good, and does so in a way that attracts lots of people. It’s a lottery, and humans cannot resist playing. So even though these people are perhaps not society’s best and brightest, it’s hard to deny the appeal. Later they begin criticizing “bad” as well.

Third: These people agitate against all social standards, values, mores and even common sense. They do this so that one factor and one factor only determines success: how well people like you. This salesman’s paradise has a secondary effect in that now, by calling someone “bad,” you not only isolate them but make them impoverished.

What has happened is that your sense of who you are and why you’re worth having around has been replaced by obedience. Even worse, you are now addicted to the praise from your masters. Without it, you wonder if you are not indeed actually a bad person, or at least a not-good one, thus a loser.

Overly Obsessive Government is a side effect of this process. As society declines, government rises. When you no longer have social standards, you need more police and bureaucrats to make laws and pass out fines. Soon most of what you do is interact with government or the secondary authorities created by its rules.

Conservatism is not anarchistic; it is something even more radical. Ours is the notion that tradition, and abstract concepts that correspond to reality like “the good, the beautiful and the true,” are better rulers than police forces or bureaucrats. We recognize the need for some government, but not moral government and definitely not government which can invent new uses for itself, justify increasing its size, and then repeat the process ad infinitum.

The grim fact is that no society can be policed. If people are fundamentally of such selfishness and individualism that they will do what is immoral or destructive the instant they are not watched, you would require at least one infallible police officer for every citizen. You could set up a “transparent society,” but without a legion of pathologically honest angels to watch the video screens, it would be useless.

OAG is the symptom, not the cause. The cause is the Crowdist desire to replace your self-esteem with their definitions of right and wrong, thus making you their puppet. But OAG is now their tool, and it was always their intent, because a removed social order must be replaced by a strong force.

Whenever you hear political discourse, it helps to automatically re-spin it using these ideas. Do we need government in every circumstance? How will government make dishonest people into honest ones? There is no replacement for having people of quality and integrity at every level of the process, because they (and not OAG) are the backbone of a thriving society.