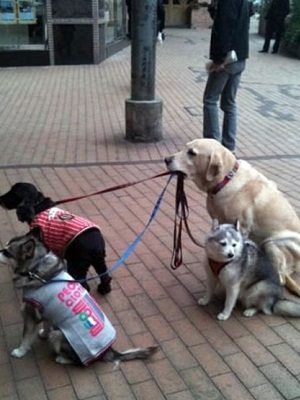 Sometimes the best way to study a phenomenon is to make a vaccine by studying it in a small, relatively harmless form.

The tyrant both rules large nations with an iron hand, and exists through the nagging of a distant relative.

As a tyrannical relative feels his or her influence waning, the demands ramp up. Pay more attention to me. I consider this important; now it’s a loyalty test.

It is as if the tyrannical relation wants to bind your fate to theirs, so that you both go down together or succeed together. Misery loves company, and self-esteem seeks partnerships to bolster itself.

The more precarious the tyranny, the more the tyrant seeks to bond.

This brings us back to the founding issue of American politics: are we independent homesteaders, trusting our wits and strength to save us, or city folk who need to feel that everyone has been assimilated into the city mindset and morality?

In this scenario, the city folk are the tyrant; the suburban and rural Americans are the independent-minded folks who just want to do it their way and see how things turn out.

H.W. Crocker III, author of “The Politically Incorrect Guide to the Civil War,” says Southern secessionists were patriots reaffirming the Founding Fathers’ belief that the Colonies were free and independent states.

“If the Southern states pulled out of the union today after, say, the election of Barack Obama, or some other big political issue like abortion, how many of us would think the appropriate reaction from the federal government would be to blockade Southern ports and send armies into Virginia?” Crocker asks.

He says men such as Jefferson Davis, the leader of the Confederacy, are American heroes.

“Jefferson Davis was not trying to force anything on the people in the North,” he says. “We wanted to be left alone. What actually caused the war is Lincoln’s insistence that no, we can’t let these people go.” – CNN

There are political advantages to a unified nation-state over a confederacy of independent states; watching the European Union attempt to decide anything larger than a standard size for disposable napkins emphasizes this point.

However, a more insidious tendency in modern society arises. People in cities, while they report good quality of life, tend to be miserable at a level they cannot perceive. Constant crowding, competition for trivial things, a lack of silence and privacy, as well as a sense of being meaningless functionaries in a vast concrete machine, make city people subtly miserable under the surface.

In turn, they become tyrants who force others to share their fate.

A group of eminent British thinkers from the worlds of education, economics and politics â€“ backed by the Dalai Lama â€“ yesterday launched a campaign to halt the nationâ€™s psychological decline.

Action for Happiness, a mass movement to promote mental wellbeing, calls on people to address 10 key deficiencies in their lives to counter our growing gloom.

Led by Lord Layard, Professor of economics at the London School of Economics, it warns that we do not give enough to others, have lost the art of connecting with those around us, and no longer possess a sense of belonging in society.

â€œFor everything we have gained in material wealth and sophistication in recent years, we have lost in happiness and the overall richness of the fabric of society.

â€œIf we donâ€™t act now, in the future we are likely to see increased levels of adolescent suicide and mental illness, and a culture in which taking anti-depressant drugs is the norm.â€ – The Telegraph

Cities have had their antidepressant for centuries: alcohol. Cheaply and easily made, it is the way city dwellers usher themselves into the breach yet again. Usually through an extra glass of wine (or a tumbler, for you pragmatic types) at dinner, city dwellers tend to lush themselves out and as a result, be able to tolerate the misery factors of their existence.

That was true in Lincoln’s time, when alcoholism was epidemic not only among many of his citizens, but in his army.

Now we have better antidepressants, more television and gadgets, and casual sex to keep us busy. But as the years tick by, and the promised Utopia remains far away, the loneliness and desperation compound.

The long-faced tyrant of the city dweller which could once fool itself by crushing the agrarian south — or bin Laden, the Nazis or the Viet Cong — now turns back to its empty apartment, unsure of where its future lies.

Revolutions are theft | Ron Paul and the Civil Rights Act