Open war on the majority as the USA crumbles 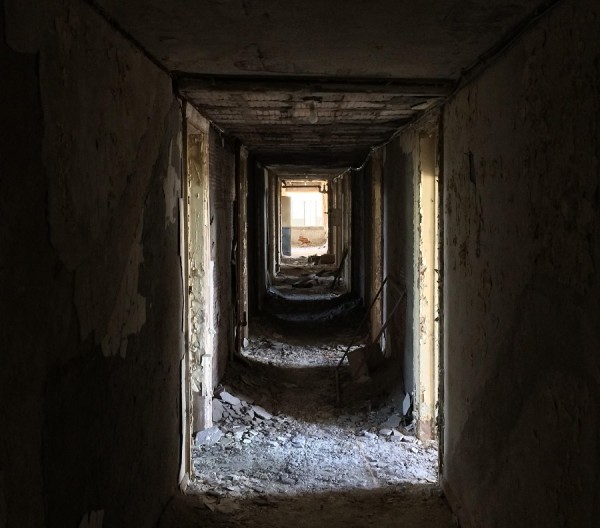 When we — those of us who break away from decay — look back on this time, we will be amazed at how little it took. Hippies in the 1960s. Panicked neurosis and wage slavery in the 80s. Leftist takeover in the 1990s, and then everything became fake.

And then it collapsed inward, both lacking anything to hold it together and having been stolen to pay for diversity, feminism, entitlements (socialism) and other liberal favorites.

The United States is like a cow floating in a tropical river. When you pull it out, you find that piranha have gotten inside and hollowed it out, taken away everything good and left bones and skin.

With our media at full power, bones and skin get a coat of polish and Photoshop treatment and look pretty good. Keep believing the promises, going to that job, staying so busy and distracted that you do not Notice. Noticing is bad; Noticing will give up the whole game.

Your fellow citizens, most of them ruled by their emotions and desires more than any sense of logic, will become enraged if you Notice, because that makes them look like idiots for thinking everything is fine and might endanger their own exit plan, which involves saving up enough cash for some fond dream that will not work out and turn into lots of TV and beer.

At this point, the liberal left have made promises that they cannot keep. They have falsified history, granted entitlements, and assured greatness, none of which will persist. They have created an angry entitled mob which sees the majority as the one thing between the mob and Utopia.

Witness what happens when students opposed the actions of liberals. They did not oppose the ideas of liberals, only their methods. They did so in a humorous but civil way. The response of the dying regime? Go after them.

Student government leaders were quick to condemn the posters on â€œfree speechâ€ grounds.

â€œWhen you are talking about minority activism, it is very easy that if you are in the majority to say â€˜well, this sort of activism is not necessary. This sort of zeal in your activism is over the top.â€™ For minorities who experience discrimination, that is not the case,â€ Student Government Vice President Jacob Schriner-Biggs adds.

The school is looking to see if it can find student code infractions in order to bring “disciplinary action” against the still-anonymous students. 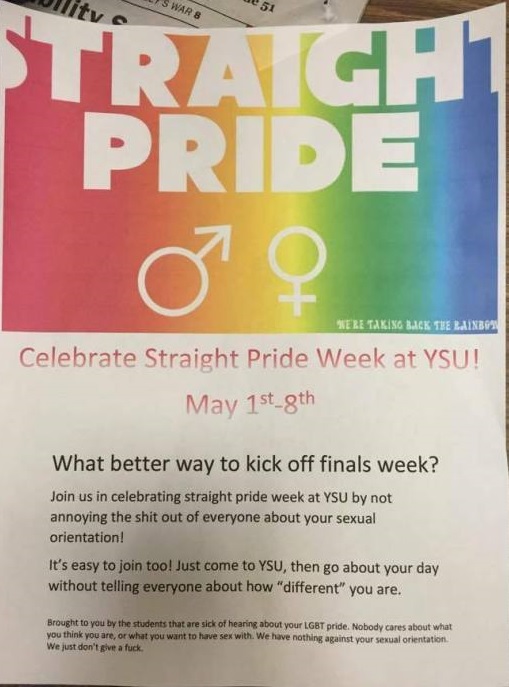 What better way to kick off finals week?

Join us in celebrating straight pride week at YSU by not annoying the shit out of everyone about your sexual orientation.

It’s easy to join too! Just come to YSU, then go about your day without telling everyone about how “different” you are.

Brought to you by the students that are sick of hearing about your LGBT pride. Nobody cares about what you think you are, or what you want to have sex with. We have nothing against your sexual orientation. We just don’t give a fuck.

We are in the days of the final Soviet in the USA. You are either on the side of government and the ideology that justifies its power, or you are a presumed aggressor who will be persecuted if you raise a fuss.

If liberals follow the archetype set up by the fake rape cases at UVA and Columbia, the school will investigate and find nothing, but allow the accuser to reveal the names of the accused and then do nothing to protect them. The mob will close in, use Google to ruin their names, and ensure they never have job prospects again.

Message delivered: get on board with the State Ideology or you will die in poverty despite your college degree. We will destroy you.

The grim fact is that they are doing this on the dime of the people they are persecuting. Western Europeans arrived at this land when it was peopled by savages and covered with wilderness. Through blood, sweat and tears they forged a great nation out of that raw material. Without the Western European heterosexual and often conservative/reverent male, none of this would have happened. No other group can make such a claim, especially not the type of people who now inhabit our colleges.

Every civilization on earth so far has gone out by becoming internally decadent and disorganized. Western civilization has a choice to reverse course, cut off the parasites and exile them to somewhere in the third world, and fix itself the same way it built itself: by focusing on reality, bravery, and solid conservative values. Until that time, this mass witch hunt will only get worse.

The girl behind the counter | Another day… another race riot!