Only Seventy Years Ago, People Could Say What They Knew 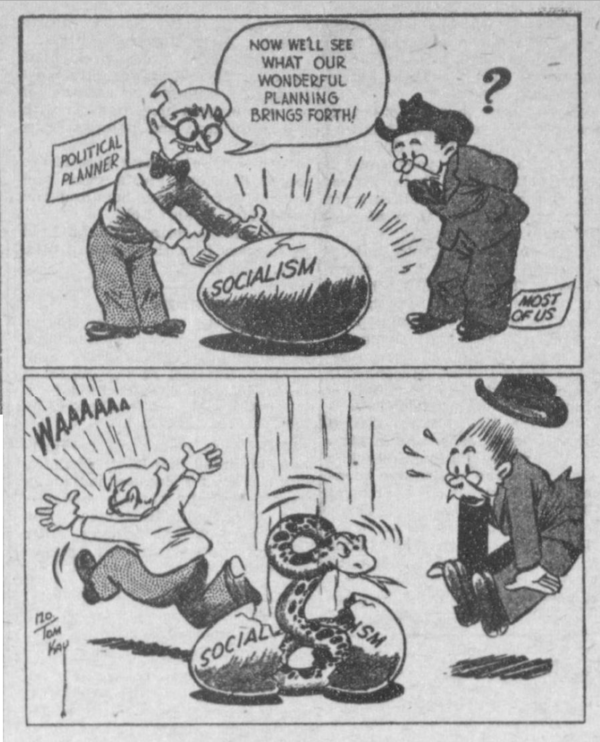 An alert reader sent in this coming from the a newspaper from Muenster, Texas back in 1949 on the always-tempting illusion of socialism, and then its consequences.

It is a mighty fall for a people to once have ruled the world, but now be held hostage by the mental incompetents among us. It is a shorter fall, but still a horrible omen, that seventy years ago we could speak honestly about the parasitic concepts dwelling among us. Today the enemy cannot even be named.

The image accompanies an article which would strike modern readers as too difficult and too honest:

We hear much these days about equality, but there seems to be a wide divergence of opinion as to just what “equality” means when applied to the human family.

As a socialist what he means by “equality,” and he will tell you that it means a civilization in which all equally share the wealth. He will neglect to add that it generally means sharing the poverty.

Ask a capitalist or a believer in the capitalist system and the definition you will get from him is that “equality” is the civilization in which all have equal opportunity and equality before the law.

Commencing with the French Revolution the socialistic dream of equality of wealth has led to vast cruelty and endless bloodshed, all to very little purpose. At times the bourgeoisie and the upper class either have been relegated to the sidelines or completely liquidated by the proletariat; wealth has been confiscated and divided. But, in every such case, it was not long until the people discovered that the beautiful theory of equal sharing of the wealth does not work out in practice. By killing off or rendering inactive the brains of a nation, the sum total of accomplishment is poverty for all.

Any government can immediately establish equality of a sort by taking away property from the rich “haves” and distributing it among the poor “have nots.” Currently that is what we are doing through progressive income taxation, social security, unemployment doles, etc. In the past, whenever and wherever a government has undertaken equal distribution of the wealth, the “have-nots” did not become less poor. Notable examples of this are the French and Russian Revolutions.

Why did these fail? Simply because confiscation of the property of the rich, even if honestly distributed among the general population, no more raises the level of wealth than a cup of water appreciably raises the level of the water in a bathtub. The net result of those two revolutions was to produce an equality of poverty. This is always easy to do and any dictatorship can accomplish it. What dictators cannot accomplish is something far more difficult â€”
an equality of plenty.

Here in America we had made considerable progress toward an equality of plenty in a capitalistic economy. It would be idle for us to contend we had reached that much-to-be-desired goal, but we were on the right track. At least we had traveled further toward it than has any other nation in the entire history of the world.

We know the formula for achieving an equally of plenty â€” it is to produce a sufficiently large quantity of things, and the distribution of them will take care of Itself. The automobile is but one of many things which can be cited as proof of this. We produce the automobile in large quantities, and witness the many millions of passenger cars that travel our highways today.

If the United States is permitted to resume along the pathway on which it started and along which it journeyed for a century and a half, it is not unreasonable to assume that eventually we will achieve an equality of plenty, without any governmental planning or interference.

Just as there is a minimum of things necessary to manâ€™s decent subsistence, there is a maximum of things that he can use. Therefore, when sufficient production of all things â€” necessities, semi-luxuries and luxuries â€” has been accomplished, there will be plenty of everything for everybody and an equality of plenty will have been established. That is the only way it can be done.

The “In” Crowd | Walmart As A Late Amerikan Empire Free Rider