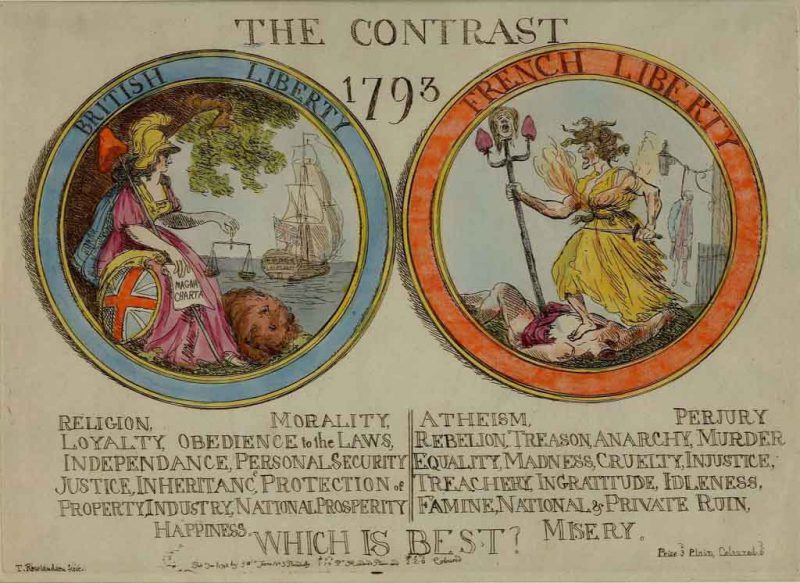 Back in the early days of the Great Awakening, back in the 1990s, most people were looking for a group to blame for our problems. Some of us saw not a group as the cause, but a common group pathology as the cause, which then formed groups which advanced that pathology.

They find that scapegoat in any power which restricts them, since their founding myth tells them that they are good and therefore, anything restraining them is bad. In fact, directionless and unhappy people usually do bad things, so the opposite is true.

Once people start blaming life itself for their own failings, they have rejected any notion of understanding reality and instead have created ideology, or a story about how life would be perfect if it acted as they wanted it to, instead of how it needs to act in order to fulfill its role in a larger order like nature.

A typical Crowd begins when someone points out that some are born to be rich, and the rest will have a lot less, and based on the assumption that all the individuals in the Crowd are good, this means that the division by life of people into bands of wealth must be bad, and should be overthrown.

At that point, you have a crowd that combines begging-the-question with passive aggression. They assume that their values are right, and so they infer that anyone opposing them is wrong. For this reason, when they speak up and anyone fails to accept them, they attack him as an enemy.

This forms an effective human dark organization like a gang, clique, cult, or organized crime. They approach everyone they can with the intent to convert or destroy them, and most people convert to avoid being faced with a potential fanatical enemy.

Religions like Islam have learned a great deal from this method, and employ it themselves. Once a certain number of Muslims are present, people either convert, or face constant attack from the new majority. Gangs do the same thing in housing projects and public schools.

However, these groups are not the cause, but the effect, of Crowdism, which is a defect in human wiring created by our fear of losing social status:

It is a universal human tendency that ruins things, like laziness or narcissism. It does not require anyone to invent it, because it is invented in all of us. It is an inherent pitfall to intelligence. Some might call it hubris.

Crowdism is what happens when individuals, deciding to act in their own interests, band together to make any rule other than “the individual does what the individual wants” taboo. This occurs in gradual stages, and can happen at any level of politics, family, society, culture or any other form of decision-making.

The key to this is that it’s a paradox. “Anarchists unite!” makes no sense to most people (it always made sense to me; if you want to change the world, you’re going to do it in a group, even if advocating no group control). Crowdists are radical individualists who are in a group only to use guilt to compel others to yield to them.

In other words, there is no enemy but ourselves because when we do not sufficiently suppress our instinct toward self-pity and fear of our own ability to succeed at whatever level is appropriate for us. Like other human pitfalls, we fall into this through our own excesses and lack of self-discipline.

While the Right rages on about “collectivism,” and the Left claims that the Right supports “greed,” the truth is that both are individualism, just in two different forms. Individualism makes people greedy, but when they united into a Crowd, they become excessively so.

All of this comes from a desire to step out of reality and the demand of nature that we adapt to it:

Crowdism makes us feel like we are the world and can command its parts to organize according to our will instead of in line with the principles of the world. Our big brains lead us into a solipsism where we see the world as an extension of us, and not us as a part of it.

This means that we can never be wrong, because we simply rationalize our decisions as being ideologically correct and the world as un-enlightened, and suddenly our errors become victories. It is like a magic trick by a sad alcoholic clown at an elementary school birthday party.

Much as people do not understand that the root of Crowdism is individualism, many do not see how it is a form of ochlocracy, or mob rule. Rule by the herd is more complex than the usual definition reveals:

The Collins English Dictionary defines “mob rule” as “The fact or state of large groups of people acting without the consent of the government, authorities.”

In a joint statement from UNC System Board Chair Harry Smith and UNC System President Margaret Spellings, the pair responded to the destruction saying, “We are a nation of laws—and mob rule and the intentional destruction of public property will not be tolerated.”

…When government officials and lawmakers say “mob rule” will not be tolerated, what they’re actually saying is that the official rule of law in this situation will not be overshadowed by the desires or actions of a mob.

This type of rule is also commonly called an “ochlocracy,” which Webster’s Dictionary defines as “a government by the mob.”

The Collins definition exists to do one thing: separate government from mob rule, telling us that if the mob organizes a government or takes over a government, the ochlocracy that results is not actually mob rule, when in fact it is merely a mob acting through government.

Laws, by the same token, can be generated by a government that has been taken over by a mob. As the theory of Crowdism tells us, the Crowd can infiltrate any organization that gives itself over to utilitarian principles, and so the mob can easily make laws to support itself.

In fact, the opposite of ochlocracy is not government, but hierarchy. When government is created by mass vote, it as much ochlocracy as the most anarchistic protest; when government does not exist, but we have natural leadership and ranking by ability, no mob can exist.

The greatest secret of ochlocracy, then, tends to be that it can take almost any form. It can be a democracy; it can be totalitarian; it can be anarchist, like rioters tearing down statues; it can even be commercial, much as consumerism rewards lowest common denominator behaviors.

If we wish to oppose mob rule, we have to go to the root. Any time every voice in a group is equal, you have ochlocracy. Any time you have hierarchy, you do not. All of modernity is crowd rule, and the crowd gets it wrong every time.

We Are Witnessing The Collapse Of Global Leftism | Disorganized Thinking